Reaching for the Skies

It may seem to an aspiring pilot that a career in flying is at once exciting and glamorous. Often forgotten is the heavily regulated, lengthy and expensive training path that leads to such an occupation. To some, perhaps, it is the challenge of developing the ability to safely control the inherent risks in the job that is the attraction. Others may eye the international travel, respect and other benefits afforded an airline Captain, yet others just want to fly and enjoy the freedom of the skies. Not many can afford to do so on the income from a mundane job. For those who cannot, flying must be the career—being paid for doing something they love.

I talked to two pilots on two continents about their career path and the routes that both took to achieve their aims. They were remarkably similar, underlining the fact that flying is an international occupation. Probably, the most economical route to achieving a career in flight is via military training, affording an easier entry to an airline pilot’s seat afterward, but this is not always the desired endpoint. For Jan Thomas, it never was. Flying is in Jan Thomas’s blood—his parents owned a small flying school at which his father was chief instructor. He described for me two main paths that would-be pilots generally take.

One, he named as the “self-improvement” or “old-boys” path: the way flying always used to be, gaining the aeronautical knowledge and skills by doing it. After clearing the basics and achieving solo, the goal is to amass sufficient flying hours to advance, perhaps first as a “low-houred” basic instructor, later as an instrument rating instructor, and eventually building the hours necessary on a light, twin piston-engined aircraft to achieve the rating for a commercial transport single pilot. To do this, pilots may tackle all kinds of work, such as flying small air taxis and skydiving planes, towing banners or gliders, crop spraying, traffic reporting, fire or pipeline patrols, or aerial photography. Gaining flying hours on different aircraft types is the career ladder to greater things. Sometimes, pilots will bond themselves to a company in order to get the necessary flying hours for their next step.

“Nowadays, a second route has opened up,” Jan says. Some airlines will accept a one-time payment to train a low-houred pilot as a First Officer on a Boeing 737. Ryanair, a low-cost Irish airline flying into Europe, will accept a payment of around $50,000 for such training, guaranteeing an airline career with better pay and benefits. That world has its own challenges: an airline pilot has to learn other skills such as dealing with today’s automation of airline flight, company issues, and passenger relations. Airlines find it easier to mold younger, inexperienced pilots into company-minded individuals, but that life has never tempted Jan Thomas, who enjoys the freedom and variety of single-pilot work. He feels that the self-improvement route leads to a wider experience of aircraft types, work and weather, and places a premium on hand-flying skills.

Jan flies out of an airport in the middle of England. His work can take him north to Iceland, south to Morocco, or east to Germany. He is qualified not only for the twin gas-turbine-engined Cessna 406 he usually flies, but also for the Citation XLS twin engine corporate jet, quite a different kind of ride at 41,000 feet and Mach 0.75. In a former job, where he flew that aircraft, he transported members of the British Royal family, bands, sports and film figures such as actor and director Kenneth Branagh, and current World Formula 1 champion Max Verstappen. However, I can tell it is the 406 he enjoys most. The work can range from transporting medical teams to specialist operations, coastal search and rescue, and oil slick patrols and assessments, which often involve spraying dispersant at 30 feet above the waves. Included, too, is ferrying urgent cargo like organ transplants and needed machine, truck and car parts to keep production lines moving.

A large part of Jan’s work involves Lidar1 surveys—3D mapping of selected terrain with a specialized downward-looking “camera” set into the floor of the aircraft. This entails flying a specified racetrack route not unlike a farmer combine-harvesting his field. It requires exceptionally accurate flying at 8,000 feet with a steady hand on the controls for up to 6 hours, often at night. Deviation from the prescribed track is limited to no more than 30 feet horizontally and 50 feet vertically, while maintaining a specified ground speed, all despite any wind conditions. Lidar surveys need a cloudless sky, minimal winds and close coordination with air traffic controllers to avoid other air traffic. “Tail winds are the worst,” says Jan, “because the plane has to fly slower to maintain the prescribed ground speed and there is a limit to how slow a plane can fly before it stalls.” The data the Lidar produces is used for developing coastal and river flooding defenses, tidal heights, and sometimes for archeology. Data can be sold to the UK national mapping organization or even to Google Earth.

Mike Hensrud is a born and bred ebullient Coloradan whose piloting path was not dissimilar to Jan Thomas’s in that it followed the self-employment route, the same treadmill of necessary experience. One day, Mike was navigating a light aircraft on a route over Kansas to gain hours

when he was faced with a major thunderstorm. Since his aircraft was not equipped to cope with those conditions, he was obliged to land at a regional airport where other flights had also been grounded. In talking to the other pilots, he learned of an interesting opportunity—you could be paid for flying into thunderstorms. It sounded to Mike like a no-brainer.

As Mike tells it, large thunderstorms often contain droplets of supercooled water that is very cold but not actually frozen. The droplets can rise within a storm at a rate of 2-4 thousand feet a minute by convection within the cloud system. This process is repetitive and large hailstones can result that often damage crops, vehicles or buildings when they finally fall. Storm systems that are generating these conditions are particularly vicious, but Mike found that insurance companies or water authorities would pay good money to induce the potential hailstones to fall as snow or rain before they became so large that they would cause damage resulting in insurance claims.

With a little more experience under his belt, Mike was able to undertake these dangerous flights that entailed flying into the edge of thunderstorms. His aircraft was fitted with an external tank containing, in Mike’s words, a “witches brew” of chemicals, dry-ice or dust, which acted as nuclei for the water droplets to form on, then falling as small hail, snow or rain—cloud-seeding is the technical term. Mike was able to add many flying hours to his total, braving the high winds and icing conditions attendant on this activity over many parts of the Dakotas, Kansas, Oklahoma and Texas. Now, Mike has given up those extreme risks and flies as a Captain for a major airline on the Airbus A320.

1 Light Detection and Ranging. A remote sensing mechanism that uses light from a pulsed laser to measure distances to the Earth. The light pulses, combined with other data recorded by the airborne system, generate precise, three-dimensional information about the topography of the Earth’s terrain. 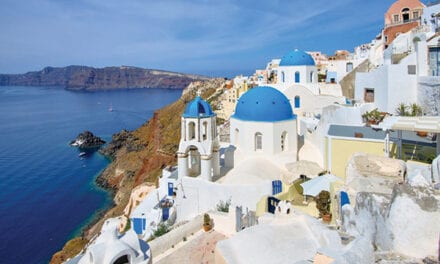 The Strangeness of Blue

Strictly for the Birds Part 2: Something to Crow About