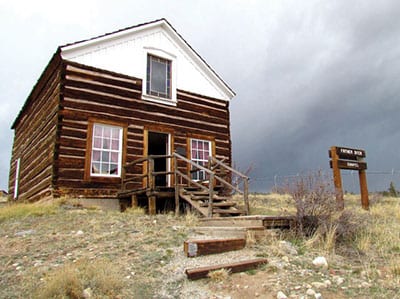 John Dyer was the only preacher constantly traveling through South Park and the Leadville/Breckenridge area at the time mining was in its heyday. During the two decades of his calling, he became tangentially involved in some of the many notable events of the times. Early in 1863, when Dyer had been in the area less than two years, Felipe Nerio Espinosa and his brother, Jose Vivian, began a reign of terror in the Colorado Territory and became, arguably, America’s first serial killers. After the Mexican–American war, in which their extended family had been sorely abused and lost six members, the brothers had taken to horse stealing and freight robbing, escaping the pursuing law into the Sangre de Cristo Mountains. Allegedly, Felipe had dreamt that the Virgin Mary had ordered him to kill 600 Americans—100 for each of his lost family members—and he and his brother began a rampage that led to a trail of 32 grisly murders in New Mexico and Colorado Territory.

In Colorado, the pair killed randomly, horribly mutilating the bodies of their victims, seeking out lone miners and travelers. The Territory became so paranoid that on two occasions, strangers entering Fairplay were mobbed and lynched without trial. A posse pursued one man at Red Hill, thinking he was one of the murderers, and he ran all the way to Fairplay to escape a lynching. On the way, he lost his shoes and arrived in his socks. Dyer was in Fairplay at the time and happened to see the man run into town. He recognized him as a hotel owner from California Gulch (Leadville) and shielded him from the posse’s fury until the mistake was made clear.

In April, a lumberman hauling timber between Alma and Fairplay spotted the two Mexicans at a killing, and though he was shot at, a wad of papers in his breast pocket deflected the force of the ball. He managed to escape with only a minor injury from the shot when his ox team stampeded at the sound of the gunfire and he survived to raise the alarm in Fairplay. A posse of 17 men tracked the pair all day and by the light of a full moon the next night, reaching the outlaws’ camp near Fourmile Creek at daybreak. There, Jose Vivian Espinosa was shot dead, though his brother escaped into woodland.

Felipe Espinosa, the “Axeman of Colorado,” as newspapers styled his method of mutilation, returned to his home territory, still nursing his grievances against gringos, now magnified by his brother’s shooting. He had long been a zealous member of the Penitentes, a Catholic flagellant sect, and his distorted religious views were steadily driving him to madness. He recruited a young teenage nephew and returned to Colorado. It is recorded that Felipe returned to his brother’s grave, exhumed the body and cut off a foot as a keepsake before resuming his murderous spree, but it was not to last long. Felipe was drunk when he and his nephew held up a wagon and the two teamsters managed to escape, raising the alarm. A notable mountain guide and tracker, Thomas Tobin, who had worked for “Wild Bill” Hickok, “Buffalo Bill” Cody and Kit Carson, was set on the Espinosas’ trail and after three days, he found them camped. He shot them both and brought their heads back to Fort Garland. Ironically, Tobin was a distant cousin of the Espinosas.

The inhabitants of South Park were not to have much rest from outlaws. On a fine morning in July the following year, the stage at Buckskin Joe was loaded with a strong box containing about a thousand dollars and mail that John Dyer had just brought over the Mosquito Pass from Breckenridge. In addition, there was a considerable quantity of gold dust from the Orphan Boy mine (another rich lode near Alma). Heading for McLaughlin’s ranch stage stop, the site of today’s Como, the driver and station manager set off; there were no passengers. Unbeknown to them, the Reynolds gang had come into South Park the previous day intent on seizing a fortune to support the Confederate cause.

Jim Reynolds and his brother had worked a placer gold claim at Fairplay in 1860 and were arrested at the time as Confederate sympathizers. Escaping, they had gone to Texas to join Confederate guerillas there and were wanted for robbing a wagon train of $40,000. Before the Buckskin stage got to McLaughlin’s, the Reynolds gang had seized the station there and they robbed the stage as soon as it arrived. A posse was formed, which eventually tracked the gang to a hideout near Kenosha Pass, and ambushed them. Most of the gang fled south stopping to eat and sleep at a deserted ranch in the south of the Park. There, another large posse led by a Lieutenant Shoup (whose brother had been killed by the Espinosas the year before) discovered them, but again, all but one escaped. The hero of the action was the landlord of the South Park Hotel in Fairplay; he captured one of the gang who revealed their eventual destination. The ringleaders were finally taken near Cañon City, and the five were transported to Denver and thence toward Fort Lyons where they were to be tried. The guards must have reckoned otherwise as they shot the men on the journey. Dyer, in his account of the incident, swears observing the loading of the prisoners in Denver and that one of the guards was the very stage driver that had been held up at McLaughlin’s.

In 1867, acting once again on his own initiative, Dyer bought a two-story log cabin in Montgomery (a mining town west of Alma, now submerged below Montgomery reservoir) for $100 and had it moved at his own expense (another $100) the 10 miles to Fairplay to use as a church. It can now be seen in the South Park City Museum in Fairplay.1 It was for selfless acts like this that Dyer was given the honorary title of “Father” by miners—generally a Catholic designation—even though he was a Methodist; it was a mark of their respect and admiration for his grit, determination and dedication.