If you Google Eileen Koenigsberg, you might stumble upon her life mastery website and peruse the books she has written. Or perhaps you’ll come across Moore Koenigsberg Architecture, where Eileen and her husband, Jon, have been serving up residential and commercial designs for the Denver Metro, Evergreen and Conifer communities for 20 years. I met her for coffee on a sunny Tuesday afternoon to discuss what I had been Googling for: her music.

I offer this introduction as a demonstration of what I find most inspiring about Koenigsberg’s—or, her stage name, Lena K’s—musical journey: while it could have begun sooner, her life took other directions—into career, into raising a family, into studies on other avenues. But music was a passion that remained with her. Now she has chosen to come back to it, to dive in full force, and her composing and efforts are perhaps even stronger for the wait.

“I was classically trained as a pianist, starting at 5, when my music teacher realized I was reading her music,” Lena says. She spent her childhood and young adult years learning the keyboard, in choirs, and even participating in an international classical piano competition. “But, at a young age, I didn’t understand how I could be a composer. I could be a classical pianist on stage, which terrified me—and plus, it was a little boring, just doing covers of Brahms and Beethoven. How can you play it differently than somebody else?” Lena had yet to find what would make her music her own.

That moment came in the summer of 2014 at Music at Myers Ranch. “I’m looking up, watching this woman singing with a band, thinking, I want to be that. I want to be her. And, it’s kind of a crazy story, but a month later, I was actually on that same stage performing.” She found a Conifer band looking for a keyboardist and she joined up. It was a port of entry, and Lena was on her way. “But I knew I wanted to become a lead singer,” she adds.

Lena spent the next several years playing in different bands, with longer stints in Mstique, a women’s trio, various other duos and trios and, most recently, as the lead vocalist for Silver Lining out of Conifer, whose gigging was Covid-lulled during Lena’s time with them. “I really wanted to do my own stuff, too, and come back with more intensity,” she says. “Now I’ve been writing and composing and taking production classes. Trying different things.” For Lena, the musical journey has been about unfolding and coming into her own.

This is particularly evident in the music classes she’s been attending. “One was songwriting with H.E.R. I was so comfortable in her class, and it was really fun.” The second class is a production class led by pop giant Charlie Puth, and it has challenged Lena in a couple of ways. “It’s very technical. It’s a little harder than just sitting down with your instrument,” she explains, but it has also challenged the notion of a song as a personal statement. “Charlie Puth, he’s in his thirties—and I think, I can’t write a song like that. My songs are about things I’ve gone through, things that are important to me.”

This artistic revelation came to Lena on a drive home through the mountains. “So, I’m driving home from my son’s wedding, through those rocks on the 285 Corridor, thinking about my son getting married, and how my parents were aging, and how my mother-in-law couldn’t be at the wedding, and how my daughter just moved to Iowa—these were the things I was interested in writing about. About the passing of time. I just knew I had to write a song about that.” This is what her song “Snapshots” is about. Lena has realized that by waiting to find herself in her music, she’s capable of a richer, more thematic depth. “I just turned 60 this year. Do I want to be in a rock band in my 60s? I love performing, solo or otherwise. Of course I do!”

“A lot of it is,” she continues, “let’s do this, let’s explore. Explore your own music, explore covers your own way.” This blending of self-growth and musical ambition is the sum total of different phases and lessons in Lena’s life. And she says that this willingness to stretch one’s self and to allow the edges to blur is how she’s found herself in music—and how she hopes others can too. “There’s something to be said about being able to sing in front of people and letting the energy flow. There’s a healing that can occur with that,” she says. “And I would like to help people explore self-expression through a weekend seminar of singing, getting more comfortable singing in front of people. Wouldn’t that be

a cool thing? Learning how to be yourself through singing.”

To learn more about Lena K’s music and upcoming events, visit lenakmusic.com or find her music at soundcloud.com/eileen-koenigsberg.

Live From the Mountains 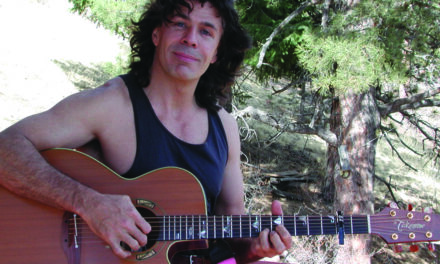