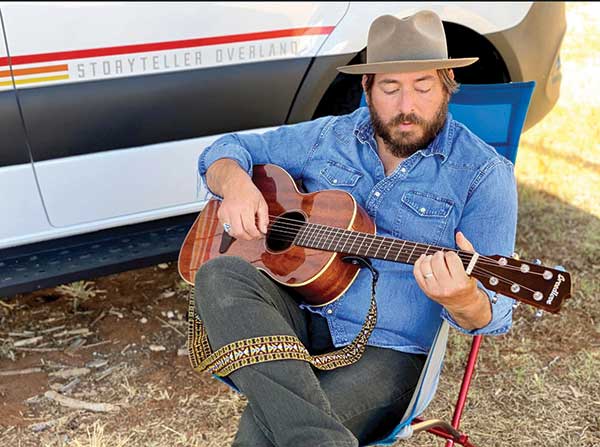 While live music looks a little different these days, our mountain communities are not strangers to a non-traditional venue or impromptu shows. I’ve visited old estates with stages built inside the living room, been invited to secret concerts inside historic buildings and have discovered new music in local backyards.

During this COVID-y summer, I’ve seen many musicians, desperate to be back on the road and in front of flesh-and-blood humans (rather than pixelated digital versions of them), offer up intimate concerts at fans’ homes. Sometimes, it’s a free surprise, sometimes, it’s a giveaway to win, and some artists have even switched to actually booking private events. It’s yet another creative twist to still do what we love in this strange time in which we live.

Of course, Jason Walsmith, an Americana-style singer-songwriter, was doing this before the whole pandemic. In fact, Walsmith’s band, The Nadas, played their first show in Evergreen in someone’s backyard. “They had kids in college at Iowa State where we started playing music in 1993,” Walsmith reminisced. “We played their backyard every summer for a few years in a row. We built a little fan base of locals.”

Walsmith has toured with The Nadas for 28 years now, which is a long time to be together in band world. “We started in college and never looked back. We have played thousands of shows from coast-to-coast and beyond. We have a dozen records out as well as a few DVDs and special projects,” said Walsmith. And though the band isn’t technically local, they have a pretty impressive local following having played the Lake Concert Series and were headlining regulars at The Little Bear.

Actually, now, Walsmith is currently local to anywhere. “Since COVID hit, and [The Nadas] lost about 50 shows, I have been playing private backyard shows all over the country,” he explained.

Under the solo brand, Jason Walsmith Storyteller, he and his wife have put 14,000 miles on a decked-out Sprinter van just since June. Purely by coincidence, the van was upfitted by Storyteller Overland, and Walsmith senses in that shared component some common culture. “I have had 13 band vehicles over the years, from class B vans to RVs of all sizes, as well as tour buses,” said Walsmith. “I knew exactly what I wanted. When we found the Storyteller Overland MODE 4×4, it checked all of the boxes.”

With boxes checked and bags packed, Walsmith began booking shows around the country. “It has been amazing. It really feels like the way my music should be experienced. I don’t know if I will ever go back to regular touring,” he said. “I am playing for real, true fans and their friends and families that they want to introduce to my music.”

When COVID hit and Walsmith and his wife started looking for a way to travel and play safely and responsibly, it was clear they fell into the “silver lining” group. “I think this pause in our culture as we know it is giving people a moment to reflect on what is important to them in their lives,” he explained. “For many people, that pause is reminding them of the role that music and the arts in general plays in their lives.”

It has opened up new doors for sharing music. For example, Walsmith has a few sponsors supporting his camper-van tour. “I have gotten tour support from a brand called American Farmland Owner,” he said. “Many of the places I am playing belong to farmland owners, so I take some pictures and tell their stories on my social media to help promote pride in land ownership and land stewardship in America.”

Making the best of strange times, Walsmith has stumbled into a new, adventurous way to share his art and create community across the country. What’s more, he’s able to meet new people, take time to rest—and write some new music. From the sound of it, his forthcoming solo project will be reflective of this special time. “I am a storyteller, so my songs are narrative, historic, personal and descriptive. I think it works because it is a part of my true authentic self. Travel and adventure is what motivates me in life. I live for the road.”

Jason Walsmith Storyteller has already come through Evergreen twice on his travels, but you can always ask him to come back. Follow along with his occasional morning songs on Instagram at @jasonwalsmith or Facebook at @JasonWalsmithStoryteller, his camper travels on Instagram at @falkorvan, or learn more and book a show at jasonwalsmith.com.