Emily Fose lives in Bailey and is a copy editor for Your Mountain Connection and The Fairplay Flume. She and her husband, Tom, moved to Bailey five years ago, after living in Indian Hills for 14 years. She’s active in church and enjoys walking, reading, photography and cross-stitching. But, every few years or so, she gets to relive what she calls her “Warholian 15 minutes of fame.” The experience that prompts this notoriety appears in a chapter of Janet Robertson’s book, “The Magnificent Mountain Women: Adventures in the Colorado Rockies.” Emily and Katherine Bell Hunter, a brilliant botanical researcher, came to Robertson’s attention after their adventure in the winter of 1971.

Emily grew up mostly in the South and always loved the outdoors. “As a kid, my family was among the early campers. We did a lot of deer hunting in Mississippi and took three or four long camping trips, mostly in the West. I loved being outside,” she said.

In 1970, she graduated from a small college near Chattanooga, Tennessee, with a degree in biology. She took a job for the summer as a park aide for the National Park Service in Rocky Mountain National Park. At the end of the season, she chose to stay in Colorado, and could do so with the money she’d saved. Her boss, Bob Haines, recommended her for an assistant position with Katherine, who had lost her assistant at the last minute, putting her PhD research in jeopardy.

Katherine had been granted approval to spend the winter in a cabin on Trail Ridge Road to study winter environments and ecology of a particular alpine plant, Kobresia bellardii. This included permission to stay in one of the Rock Cabins (which have since been torn down), provided she had someone staying with her at all times.

The two women moved into the cabin above the tree line, about half a mile from the top of the upper ski lift at Hidden Valley, in January. The Rock Cabins were built in the 1930s to house the men who built Trail Ridge Road. Katherine had prepared the location earlier, while the road was still open, by putting up snow fences and stocking the cabin with canned food, as well as setting up various types of measurement equipment. The pair hiked in with backpacks, no small feat with steady winds of 60 to 70 miles per hour and gusts of up to 80 miles per hour. On their occasional trips down to Estes Park and back, they learned ways to make the trek a little easier. For instance, they carried their tall backpacks lower down on the frames to lessen the wind resistance.

They had to deal with the wind and the cold inside as well. Temperatures inside often stayed below freezing, sometimes for long stretches of time. Even the canned food froze. At the extreme, the coldest indoor temperature during one three-week period was 12 to 15 degrees, and the coldest outdoor temperature was -21 degrees. A simple chore like mopping the floor was impossible because the wet mop would freeze to the floor. The one-room cabin had a furnace in the center, but it could barely generate any heat with the wind constantly blowing through. To warm up, they would sit with their hands on the stove’s outer shell or their feet resting on its door. It was too cold to use the outhouse (which Katherine learned the hard way, getting frostbite) so they used a chamber pot in the alcove of the cabin.

While Katherine studied her plants and collected data, Emily’s job was to help with the chores of daily life as well as assisting with fieldwork. For instance, Katherine would read off the measurements and Emily would write them down. All of this was especially challenging to do while wearing gloves.

In the beginning, Emily and Katherine got along well. Over time, however, living in close quarters in these extreme conditions took a toll on their mental and physical health, and their relationship suffered as a result. “I had a feeling as the winter progressed, it was like she’s out to get me,” Emily said. In hindsight, she acknowledges that was “stupid” but, she said, “War was brewing.” 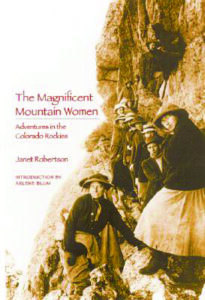 Eventually, Emily left for a 10-day break, staying with friends in Estes Park. Katherine arranged for another woman to stay with her in the cabin while Emily was gone. The woman only stayed about a week, and Emily knew that if she didn’t return to the cabin, Katherine would be unable to finish her research. “Before that week off, my focus was ‘I have to get out of here.’ After, it became ‘I need to do this for her.’ I respected her far too much to desert her, even though we weren’t friends at that point.”

Upon her return, mentally refreshed, Emily took on a supervisory role, despite the fact that Katherine was her boss. Emily took care of Katherine, letting her know when it was time to get to work or to go back to the cabin. Katherine had deteriorated quite a bit by that point and easily fell into the

Emily married in 1976 and started a family. She didn’t see Katherine for a long time after their winter together. It took many years after that to repair their relationship. “Katherine was in Vegas. She came to stay with us seven or eight years after that winter. I let her read my journal. It made all the difference in the world in our relationship. She understood what I was thinking, why I came back.”

Emily turned 22 during her stay on Trail Ridge Road. She worked four more summers in the national park, eventually becoming a ranger, unusual at the time for a young woman. She led nature walks and conducted campfire programs. “If I could start my fire, build it in front of the audience, and light it successfully with one match, I had them eating out of my hand. Most people thought I was a high school girl. They didn’t respect me until they saw I could do something they couldn’t do.”

Emily has a signed first edition of Janet Robertson’s book. Robertson shared that Emily and Katherine’s episode is her favorite. All the other incredible adventures in the book took place in the 19th century, but she was able to interview Emily, which made their story especially meaningful to her.

Years later, Emily was in a book club through her church. “I picked this book, and it was the first time any of the others had any idea about this,” she said. “When my daughter was in fifth grade, I got to know her teacher, and he started reading the book to the class. I came in one day, dressed in my gear and acted it out.”

Emily agreed to work with Katherine that year because it seemed like an adventure. What she hadn’t prepared for was being cold inside, with no relief from the freezing temperatures and wind. She said she would do it again if she could be warm. “When the Park Service decided to get rid of the cabins, I wanted to be the one to light the match,” she said, feeling that would bring a kind of poetic justice to that time. “It didn’t happen.”

Today, Emily has a new goal. “I’m beginning to make my cross-stitch patterns online from my own photographs; my goal is eventually to have most everything on my walls be cross-stitched renditions of photographs that I took.”

“The Magnificent Mountain Women: Adventures in the Colorado Rockies” is available through the Jefferson County Public Library and through online booksellers. 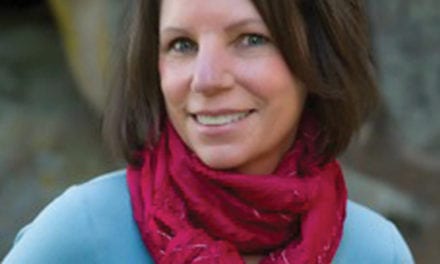 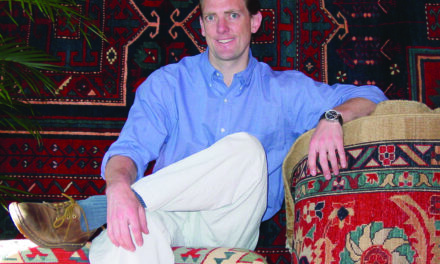 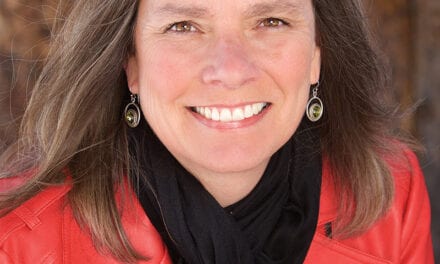