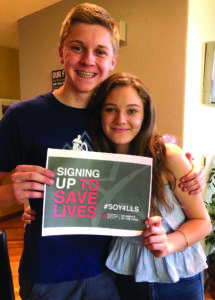 Zack Short and Amy Mahoney have teamed up to achieve an ambitious goal: raising $50,000 in just seven weeks for the Rocky Mountain Chapter of the Leukemia and Lymphoma Society (LLS) as part of the organization’s Student of the Year program.

The pair, both juniors at Evergreen High School, are friends and next-door neighbors, and both feel a strong connection to the LLS mission “to cure leukemia, lymphoma, Hodgkin’s disease, and myeloma, and improve the quality of life of patients and their families.”

Zack was born in Texas but moved to Evergreen when he was six months old. He is the top player at EHS for varsity tennis and is trying out for the baseball team in the spring. He also skis and races downhill mountain bikes. “I basically do everything,” he said. He has three sisters, one older who is studying electrical engineering at Texas A&M. Zack hopes to follow in her footsteps and pursue engineering or another STEM career. While he is looking at multiple colleges, he is leaning toward Texas A&M as well.

Amy was born in Melbourne, Australia and lived there until she was 5. She came to Evergreen via Boulder. Amy was on the varsity swim team and varsity cheer team. She wants to return to Australia for college and study marketing at the University of Western Australia.

In their immediate futures, however, both Amy and Zack are focused on the competition. Their campaign officially kicked-off on January 7 and runs through February 27. The first thing they did was name their team: Team A to Z Cancer Free. Then, they quickly had to recruit team members willing to fundraise for LLS.

Next, they organized multiple fundraisers. Allegro Coffee donated 1,000 bags of house blend Team A to Z coffee, which the team is selling for $10 per bag. Both whole bean and ground are available and all proceeds go to the campaign. Watch for the coffee bus in the Bergen Village Shopping Center (across from King Soopers) most Wednesdays from 2:30-4:30 pm (exact dates to be determined) and at Evergreen Country Day School, February 19, 2:45-4 pm. Coffee can also be purchased at Chow Down, Everfit and Cuts n’ Stuff, or ordered using the QR code or at allegrocoffee.com, with free shipping if you order five bags or more.

The team organized a day at Wendy’s in Evergreen on Saturday, January 23, from 3-6 pm with a portion of sales going to the LLS fundraiser. Additionally, a third of the proceeds from purchases at Chipotle’s Denver West location on Saturday, February 6 from 4-8 pm will be donated to LLS. When you order food, be sure to mention Amy and Zack’s Campaign so that a portion of the profits will go to LLS.

Zack first became involved with this LLS program when he helped out his friend, Connor Culligan, who led a Student of the Year campaign last year. Zack volunteered and donated money to the cause. Zack has two grandparents who have survived cancer, but perhaps the biggest motivation came from another friend whose mom has had leukemia four times. Thanks to treatment, they are all doing okay now and are a big part of Zack’s inspiration to get involved. He is honored to have been nominated by Connor to head a Student of the Year campaign this year.

Zack thought Amy would be the perfect partner and she agreed to join him. One of her closest friends developed bone cancer in her wrist in third grade. Thankfully, her friend was also cured with treatment.

According to the website, the Student of the Year Campaign is an initiative in which nominated high school students participate in a fundraising challenge to benefit The Leukemia and Lymphoma Society. The candidate or team who raises the most money at the end of the program is named Student of the Year for their local chapter. In addition to raising money, the students involved gain important skills such as leadership, communication, marketing, budgeting and managing finances.

For more information, please contact teamatozcancerfree@gmail.com or go to bit.ly/3sacwiJ. Donations can be made via the website or the QR code.