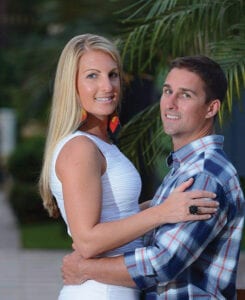 According to novelist Thomas Wolfe, you can’t go home again. Christina Fick and Connor Gardiner might agree that while you can go back to where you’re from, it won’t exactly be the same place you left.

Known in town for their businesses, Evergreen Medical Acupuncture and the Functional Farmacy, they were both born and raised here and attended Evergreen High School (Connor was two years ahead of Christina). After graduating, they went off into the world to pursue college and careers. They met up again, having both returned to Colorado for jobs in Denver, and eventually returned to Evergreen as a couple.

“The flatlands made me value Colorado,” Connor said of his time spent in Nebraska. “I didn’t always appreciate Evergreen while I was growing up but I knew this was a special place. I loved being able to do all kinds of sports and activities—outdoor adventure sports as well as team sports. My parents put me on skis and ice skates as soon as I could walk. But it is also really isolated. Down the hill, there are so many different schools and all the kids can visit each other. Up here, it’s hard to do that.”

After being away for several years, he said, he’s grown to love it here more than he ever thought he would.

Christina has also come to appreciate her hometown more as an adult and local business owner, but didn’t love it here as a kid. “I grew up by the Brook Forest Inn. It was secluded and cold. I wanted something more exciting. Evergreen was pretty darn small back then. It drove me to live in a big city, in a warmer climate.”

Connor went to Otero Junior College in La Junta, where he played baseball on a scholarship. He earned his second athletic scholarship to Hastings College in Nebraska, where he majored in communications and minored in finance. He finished his remaining three years of eligibility at Hastings and set two records: No. 1 all-time in stolen base percentage and No. 7 all-time in total stolen bases.

Christina had planned to join the military. In high school, she was a cadet in the Civil Air Patrol, an auxiliary of the United States Air Force and, at that time, she was the only girl in the state to be in the program. She also worked at the Brook Forest Inn for four years. In 2016, she and Connor got married there.

Christina’s interest in acupuncture came from her personal experience with the practice. Walking to school one day during her sophomore year, she was bitten by a bug and became very ill. “It turned out I had Lyme disease. Back then, Lyme was largely unheard of in Colorado,” she said. Medical options were not helping and that led her to try acupuncture. “It changed my life and health completely.” That was her introduction to natural and holistic healing.

She went to the University of Hawaii, then transferred to CSU and studied acupuncture as a graduate student in San Diego. She completed her degree in Denver.

The two reconnected in 2009, when they were both living in Denver. “We had mutual friends and ran into each other when we were back in Evergreen,” Christina said. “I think Connor had a crush on me for a long time, though.”

They moved in together in 2010. Connor worked in finance. Christina was finishing school and starting her business at the same time. “We were both really stressed. We worked insane hours and barely saw each other,” Connor said.

Things changed for them when they decided to go into business together. Connor quit his job after three years to join Christina, and they relocated to Evergreen. They got a tiny cabin in the woods, where they still live, and the business took off. But it was extremely hard.

While Christina did her clinicals in New York, Peru and China, she was away for extended periods over two years. During that time, Connor took care of the business as well as the cabin, which included their two dogs and chickens.

“It was very difficult as a young couple to live in Evergreen, as expensive as it is, with school debt, business expenses and homeownership,” Christina said. “We did it all ourselves and relied on each other to keep our heads above water.”

Connor coached baseball on and off for many years. He also umpired with his father. When his dad died at 57 in 2012 and they could no longer do it together, Connor gave that up. In 2018, Connor’s adopted brother, a 17-year-old EHS student, died. “We were very close to Austin. That was one of the hardest things we both had to go through,” Christina shared.

Evergreen Medical Acupuncture opened in 2011 in downtown Evergreen, above the travel agency Christina’s mother owned. In August 2019, the business relocated to a bigger, more accessible space on Stagecoach Boulevard.

Christina is a Doctor of Acupuncture and Oriental Medicine (DAOM). She specializes in functional medicine used in conjunction with medical acupuncture. After years of doing all the jobs Christina didn’t have time to do (everything from janitor and receptionist to accounting, marketing and advertising), Connor is now building up the Functional Farmacy, their own line of vitamin supplements and herbal medicines. Christina chooses the formulas and Connor handles the business side. This allows Christina to prescribe exactly what her patients need.

For fun, Christina and Connor are still quite active in sports.

Connor’s baseball ambitions turned into his current favorite thing: a slow pitch softball career. “I travel all over the country playing. I’m not paid, but all my travel is covered by sponsors. I’m still hungry to play. My goal is to be a Colorado slow pitch hall of famer.”

Christina plays soccer and manages an adult league. “It’s mostly former college players, and I’ve gotten Connor to start playing. He didn’t play at all before. Now he’s really good. We work together, love each other and we are teammates.”

Christina and Connor have weathered a lot, but they are building a pretty nice life in the place where they both started. They are home again.