At age 18, Genevieve Chandler Phipps became the second wife of Colorado Senator Lawrence Phipps in 1897. Details are shrouded regarding the cause of the Phipps’ annulment in 1904, and adding to the mystery is why then 25-year-old Genevieve purchased over 1,000 gorgeous Evergreen acres in 1914. She built an exquisite 12,000-square-foot mansion that was completed in 1916, and named her year-round residence Greystone Lodge. It is there Genevieve lived contently with her two daughters, Helen and Dorothy, until her untimely death in 1931.

Fast-forward to 1992, when Pam and Richard Bard longed for a “castle in the woods.” Their realtor did not disappoint. Like Genevieve, the Bards have poured love and restoration into their one-of-a-kind home, now named Greystone Manor, and have contributed yet another truly unique love story to its historical lineage.

“Pam and I met in 1989 just after I sold my business, Coast to Coast Hardware,” cites Richard, who then invested in ComputerLand Corporation, the first retail PC company in the world. Labeled a Renaissance man by many, this twice wed international philanthropic entrepreneur lacked for nothing but love. Theirs was not a chance meeting. A mutual friend knew the then Pam Selle was special and was a rising star in commercial real estate brokerage. Richard was interested in buying commercial properties in a very depressed Denver real estate market, but also longing for a perfect partner. Bingo!

“I was then working for CBRE as a commercial real estate investment broker doing investment sales,” Pam explains. “It was a frantic but opportunistic time because of the 1980s recession. We were scrambling in search of buyers.” A longtime admirer and mutual friend capitalized on this to finagle a plan for Richard: “I told Pam you’re looking to invest in real estate. She’s the smartest investment person I know, Richard, and she took the bait.” Pam canceled her normal noon run to meet them for lunch. When the beautiful blonde, blue-eyed, savvy businesswoman entered the restaurant, Richard was instantly smitten. “My expectations were met,” Richard affirms. “It was love at first sight when I saw Pam. She was as beautiful as she was intelligent. She met all of my prerequisites. My second wife and I were then separated but I considered myself free because we were finalizing the financial settlement.”

Meanwhile, Pam was tethered to a relationship with a man she had worked with and adored. “We had been together off and on for six years when I met Richard, but my former fiancé wasn’t interested in marriage and didn’t want more kids. Until Richard came along,” Pam recalls.

Pam didn’t fall for Richard as quickly as he fell for her—it was the next day. “During lunch, Richard and I discovered we lived in close proximity, and we both enjoyed jogging. We agreed to meet the next morning to jog and further discuss what I thought was Richard’s interest in purchasing Denver real estate.”

Excited to see Pam a second time, Richard divulges, “I arrived at Pam’s home at precisely 6:30 am, only to find she is definitely not a morning person. Knowing she was worth the wait, I settled myself on her front doorsteps and read her morning newspaper.”

It was Pam’s niece, then living with her, who saw Richard’s car parked in front of the house. She alerted Pam, who confesses, “Instantly I felt butterflies in my stomach, which I never felt before. I knew I was attracted to Richard before I opened my front door.”

Soon thereafter, Richard invited Pam to attend a golf tournament in Palm Springs. She accepted. Being the forthright woman that she is, Pam shared her Palm Springs plans with her beau and former fiancé, claiming Richard as “a potential client.” He insisted that Pam meet him for a drink before she and Richard went off together. Set up with flowers and champagne in the historic atrium of the Brown Palace, he proposed marriage to Pam. Long story short, after the golf tournament, Pam decided to marry “the devil she knew.” In 1978, Richard went back to Sydney, Australia and his single life.

“I instructed my then business partner and bon vivant, Shanti, to ‘fix me up with anyone you know.’ Shanti didn’t disappoint. I was actively dating but my heart remained with Pam. Relenting, I called her, tempting her to come see my apartment and its beautiful view of the Sydney Opera House and Sydney Harbor. It didn’t matter to me that Pam married. I couldn’t stop loving her.”

Yes, Pam’s love for Richard lingered, and when gifts and flowers arrived at her office, she claims, “My coworkers quizzed ‘are these from your husband or Mr. Wonderful?’ I remained silent.”

Fate reunited Richard and Pam at the Georgetown to Idaho Springs Half Marathon a few months later. “I was shocked yet thrilled when Pam pulled up to me at mile 3. I had just returned the night before from Sydney. I heard rumors Pam wasn’t happy in her marriage and driving Pam to her car at the race’s end began to confirm my suspicion.”

Fate intervened again less than three months from Pam’s wedding date at the celebration of the sale of Steamboat Springs to a Japanese family, the Kamoris. A lavish party was held at the Brown Palace Hotel to celebrate, and Pam and then-husband were invited since he was the audit partner who worked on the successful transaction with Martin Hart, Steamboat’s previous owner. Pam reveals, “I was asked to entertain Mrs. Kamori during the event, and in walks Richard. Martin insisted that I meet Richard Bard, claiming him ‘a charming and intelligent investor,’ not realizing we were well acquainted. My husband realized Martin was introducing me to Richard. Instantly I knew trouble was brewing. Driving to Denver’s Sushi Den with the Japanese team after the party was over, my relationship with my husband took a jolt. He didn’t speak to me for the next three days.”

Richard reveals how Cupid aimed his arrow one last time: “Our company owned a Sky Box at Bronco Stadium. It was NFL playoff time, so I came back to Denver with Shanti in tow. I had briefly mentioned Pam to Shanti, while flying the friendly skies, and that none of the women I dated in Sydney compared to Pam. Knowing other Sky Box owners, Shanti and I decided to walk the hallway to visit a few and see who had the best food. Enroute, I suddenly recognized a familiar figure and gait walking toward us.”

Pam picks up the story: “My husband and I just happened to be guests of United Banks of Colorado in their Sky Box as the conflicts between us had grown worse. It was their company policy that only couples were invited to their Sky Box, which was the only reason that I was invited. I left the Sky Box and wandered down to the ladies’ room. After 15 minutes of alone time, I started walking back when I saw two men walking toward me. Drawing near, my heart fluttered seeing Richard. We embraced and Shanti said, ‘You must be Pam.’

“Long story short, I filed for divorce and moved out in April 1990, just 10 months after I had married my ex-husband. My divorce was final in August 1990 and Richard’s in October 1990. We married in our new home in Beaver Creek on November 23, 1990, before an intimate group of family and friends.”

Richard and Pam’s enduring love is evident. They remain business partners, life partners and blended five children into a cohesive happy family. (Richard had three children prior to marrying Pam, and together they have two.) Richard believes his third marriage is charmed because “Pam and I spend a lot of time together.” The couple’s favorite Broadway show and song lyrics, “Anywhere you go, let me go too… ” are from Phantom of the Opera’s “All I Ask of You.”

The Bards’ combined entrepreneurship and love of Evergreen blossomed when they rescued and restored Greystone, and also their favorite local restaurant, Keys on the Green. After a hike nearby, Pam and Richard wanted to dine at Keys only to find it closed and deserted of tables and chairs. Disappointed, they partnered with two Denver restaurateurs to remake Keys into one of Evergreen’s best. Fate bequeathed the restaurateurs and Keys on the Green with the Bards magical touch for business as it did when it guided Genevieve Chandler Phipps to build a castle in the woods that has become Greystone Manor. 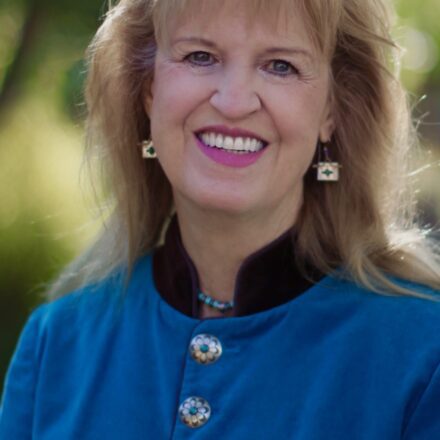 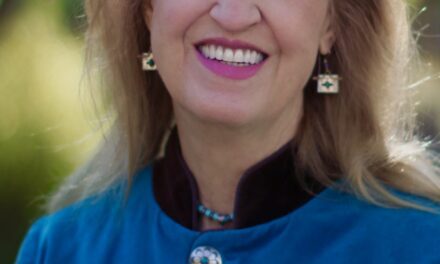