A few weeks ago, in the middle of Evergreen’s Got Talent, the stage was graced by two young kids who played music like two experienced adults. From Jeb’s guitar-picking to Jax’s deep, growling vocals, the brief set was more like a live concert than application for an opening act. Of course, these boys were humble when I asked to interview them, and humble still when they carefully answered my questions. They’re in love with music, the way it challenges them and the way it makes them feel, which is more at the heart of good musical performance than anything else. And since they wouldn’t say it themselves, I need you to know out of the gate: they’re impressively good.

This is especially true considering Jeb Barber is an 18-year-old Conifer grad and Jax Jordening is 17, taking classes at Red Rocks Community College. They’re just babes, hooked on music because it was a part of their upbringing.

“I grew up listening to country music. I listened to artists from Johnny Cash to Pat Green to Tyler Childers. Most of the time, I did not pay much attention to the words, and I was more focused on the musical aspects of the songs,” says Jeb. When he began learning guitar his freshman year of high school, he naturally turned to the songs of his childhood. “I chose songs that sounded cool and challenging. Many of the first songs I learned were songs that I grew up listening to, including ‘Wagon Wheel,’ ‘Wave on Wave’ and ‘Folsom Prison Blues.’ Learning the songs that I loved developed my passion for music and inspired me to improve my skills as a musician.”

Jax, who started out on guitar at 6 years old, was similarly inspired. “I have many musical inspirations, considering in my household we always had music playing. From gospel to country to rock and roll, my sound was drawn from each. Country music had a particular draw because of the introspective and joyful lyrics, and being a Texas boy, the genre was all around me even when I was out of the house.” By the time he moved to Conifer six years ago, his musical affinities were long-established, and he currently feels inspired by artists like Morgan Wallen, Johnny Cash and Garth Brooks.

The two serendipitously found each other at church youth group, and after connecting during a 2019 youth camp, they discovered they had quite a bit in common, not the least of which was country music. They told me that because they were both “proficient in guitar,” they decided to start practicing together. For the record, proficiency in guitar includes not only their formal training, but Jeb “screwing around with a banjo and piano,” and Jax “experimenting with percussion” including the cajón and the congas. Basically, they’re an entire band between the two of them—and they work well as a duo. “I believe Jeb is the stronger [guitar player],” Jax admits. “I play chords, and my true passion is singing along with those chords.”

After about 10 months of playing together, Jax and Jeb played their first public show this past December and started pursuing the live music scene in the foothills—and this included Evergreen’s Got Talent.

“EGT was awesome! To see all of the local talent was a humbling experience. Going on stage was pure excitement,” they said. “We’d like to give a huge thank you to the judges for seeing something special in us and including us in their selection of winners. We are incredibly excited for the chance to open at such a large venue this summer.” It will be the largest crowd they’ve gotten in front of—a thrill for them, but a thrill for their future audience too. “We truly enjoy entertaining people.”

Pretty fresh on the scene, Jax and Jeb are putting in the time, honing their craft at open mics and other shows around town, as well as writing their own music. “We have created a few good songs that we are excited to give to listeners. We hope to one day record them and see where that takes us.” For those wanting to fan on these two early, they have upcoming performances at the Park County Fair on July 15 and the Elevation Celebration on July 31 in Aspen Park.

It’s all recognition and success these young musicians deserve, and they have not lost the love of music that drives them. “We don’t have to worry about anything when we are playing music. There is a lot of pressure on people our age to be popular, succeed in school and fit in. In music, we can be whoever we want to be, and nobody can tell us otherwise. You can express literally anything through music, and we think that is why we have fallen so deeply in love with the art.” 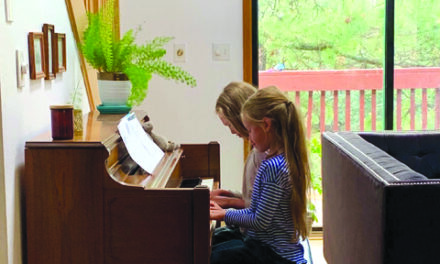