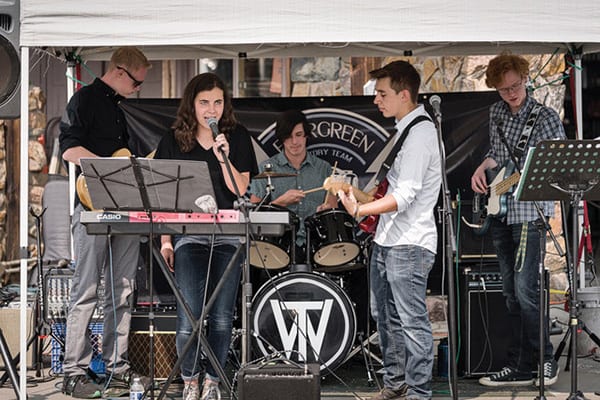 I have, for many months now, been tracking leads on the mountain area’s teenage garage bands, having come into my teenage years as a certified, flannel wearing ’90s kid. Finally, my search led me to Who’s Thomas, based in Conifer. Although I saw only one flannel, felt more hopefulness than angst, and had to, once and for all, come to terms with my own age, Who’s Thomas was exactly what I had hoped to find as the next wave of local music.

I’m not the only one who feels this way as they’ve played gigs on some of the area’s major stages including Evergreen Brewery, The Woodcellar, Wild Game and Snowpack Taproom, not to mention more than one of the recent car shows at Olde’s Garage.

The Band, as they were once briefly called—which is comprised of Charlie Cence (bass), Sam Cence (guitar), Sammi Meyer (piano, vocals), Cameron Paul (guitar, vocals) and Josh Wright (drums)—was not shy in crediting this start to their mentor and teacher (and local rock star), Joe Bye.

“I’ve been taking lessons from Joe since I was 8,” said Cameron. “And he’s been both Sam and Charlie’s teacher for a couple years now. We’ve all been playing together. [Joe] takes us to different performances that he does and he lets all his students play.”

It was at one such event, the Evergreen’s Got Talent show, that Who’s Thomas got its start, including their unusually catchy name. It all began with a sign-up sheet.

“Sophomore year, their guitar teacher signed them up for a talent show and they wanted a drummer,” Josh started out.

Charlie chimed in. “Joe was like, ‘They’re looking for kid bands. Do you know a drummer?’”

Cameron added, “Joe initially set it up for us because he knew the people running it. But he wasn’t allowed to officially enter us, so we had to do it.”

Somewhere between Joe’s suggestion that the kids find a drummer and play, and Cameron’s making their sign-up official, a mysterious Thomas was added to the band list.

“They called me up and said, ‘We have everybody’s names, everybody’s instruments. But who’s Thomas?’” Cameron recalled. “And it was the one thing that they couldn’t get straight, that everybody kept asking us. They asked us all the way up until the day of the gig!”

“I guess I’ll never live that down,” said Joe Bye, as I did a little digging into the story. “In my defense, they didn’t even have a name for the band yet. I asked them, ‘What do you want me to call it on the submission sheet?’” The kids’ suggestion was “The Band,” but believe it or not, there was already another entry by that name, and Joe had to act quickly. “They were not yet a formal unit, but they had a drummer friend they had been playing with,” said Joe, who couldn’t remember the friend’s name. “To meet the submission deadline, I wrote ‘Thomas’ and the rest is history.”

So Josh, not Thomas, officially came onboard right before the band’s first performance (and they also backed a few other performers during the talent show). “We got to the gig and they’re like, ‘Just double-checking for the MC here. It’s Josh, Charlie, Cameron, Sam—but no Thomas?’ We say, no, Thomas doesn’t exist,” said Cameron.

“It became a thing. It was funny. We kind of liked it. We went with it,” Cameron added.

By the end of Evergreen’s Got Talent, Who’s Thomas looked much more like a real band, with a real drummer and a real name, plus an inside joke to fall back on. They weren’t truly complete, however, until the addition of pianist and vocalist, Sammi.

Though many of the band’s members had crossed paths at Conifer High School, and specifically in band and music classes, Sammi’s joining was more serendipitous than orchestrated through familiarity. Shortly after their first appearance at Wild Game, Who’s Thomas was lining up other shows at local venues, a scene I decided to dub Kids in Bars.

“They were practicing for a gig,” Sammi explained, recalling that it was in the band room at school. “I was hanging out in there and I just started singing. They said, ‘Oh, you know this?’ And they needed a girl singer for it. So, I started singing with them and eventually, we were like, this is kind of cool.” Sammi joined them for that next gig at Snowpack Taproom and the rest was history.

I got the chance to listen to Who’s Thomas jam through a song and I was thoroughly impressed by the group’s fluidity and the way they get around their instruments. While all five members have lifelong experience in music, it was clear that they all possessed a certain intuitiveness as well. This, they also credit to Joe Bye.

“The way he teaches is so unique,” said Sammi. “We walk in and he’s like, ‘Alright, what do you guys want to learn?’ And they’ll play it a couple of times through without music or anything.”

“It was a bit hard to get used to,” Sam admitted. “The first time, you think, I can’t just learn that by looking at you playing it. Then, the tenth time you’ve played with him, you’re like, yes, this all makes sense.”

“He teaches through example,” added Charlie. “So, I started learning a lot more theory from him, in a practical sense. What he teaches us is more hands-on. And he takes us to gigs.”

Then there was a long reminiscing of an hours-long Christmas performance at the Woodcellar, where Joe had invited Who’s Thomas to be “The Band” for the event.

It’s clear that Who’s Thomas has had a great teacher and champion in Joe Bye, but when I spoke with him, he was quick to put the onus back on the kids.

“I’ve got to give credit where it’s due,” he said. “Those kids work hard. They practice consistently and experiment with different genres. I’m honored to be in a position to help them. They’re great players, they possess a lot of talent. I believe greatness is in the cards for Who’s Thomas.”