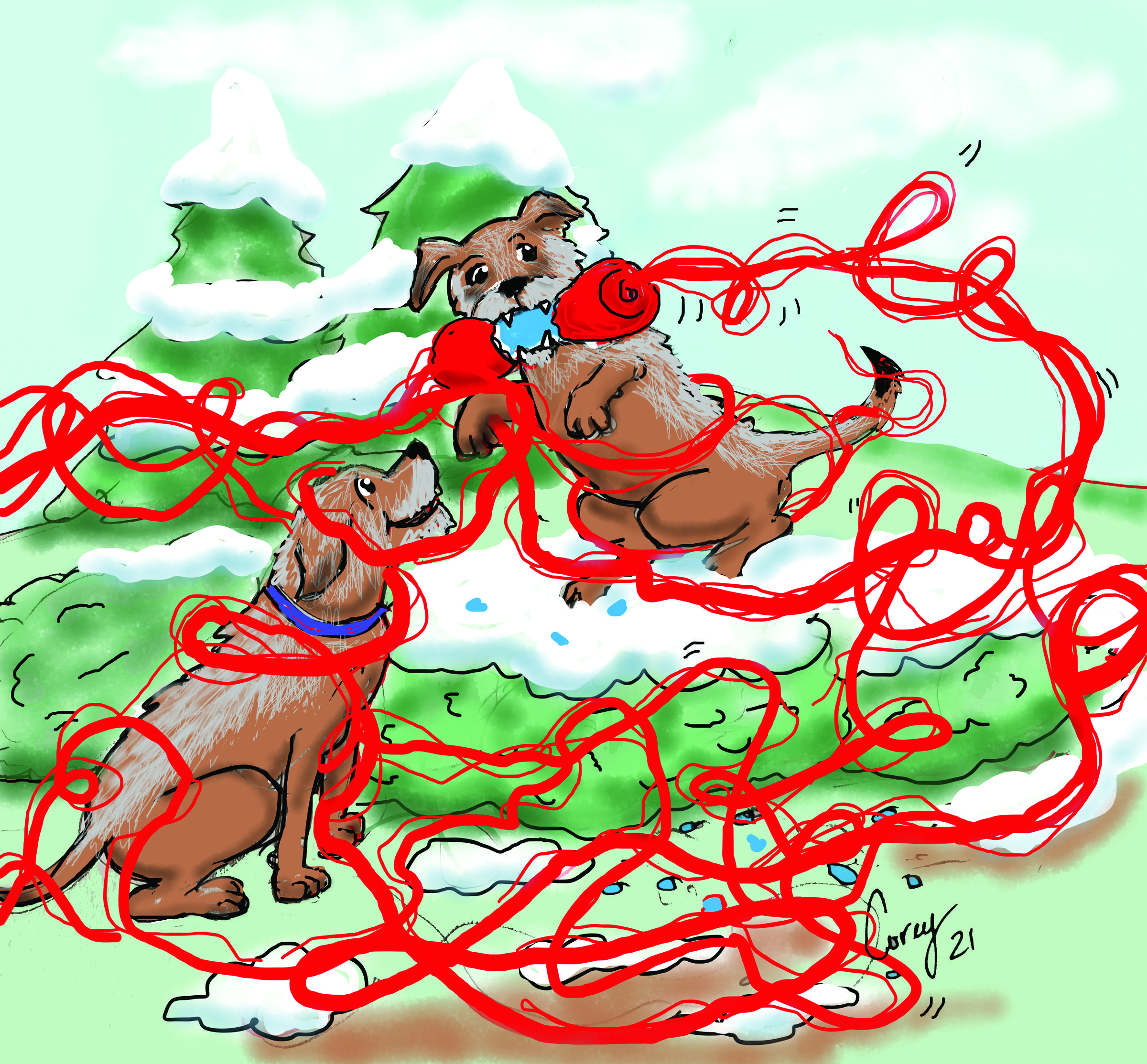 “The path of yarn told the tale of every move the dogs made.”

Many people enjoy crocheting for the relaxing repetitiveness, and also to be productive while sitting down at the end of the day. Others use that hobby time to create nice gifts for the people on their Christmas list. It was in that effort that Melissa found herself making a simple error that would turn into a Christmas crochet debacle.

Melissa and her husband, Tom, have two lively Wirehaired Griffons, or “Griffs,” as they are often called. One is two and a half years old and adept at following the house rules. The other is only five months and cannot be trusted to do what is expected of a good dog. Not yet anyway. To say that one can influence the other would be an understatement. Sometimes, the better-behaved older pup, Molly, shows her younger companion the right way. But other times, it’s the younger, Trigger, who sets the tone.

It was to be a relaxing evening in the household, which was a welcome relief after a busy day. After dinner, Melissa settled herself into her favorite spot on the couch and gathered her crocheting onto her lap. She began working the yarn into shape, despite the fact that she hadn’t yet transferred the new skein into a ball. She was industriously fashioning the yarn into potholders, as she didn’t want to let the people down who welcomed this yearly gift. Tom was in the office working on a surprise for their family—it would be a video message full of inside jokes and good-humored teasing. When he was ready to start filming, he called Melissa into the office.

Where normally she would put away her project when she was done for the night, this distraction promised to be a momentary break and she planned to pick up where she left off in a matter of minutes. She placed the crocheting project on the seat and joined Tom. Between outtakes and fumbles, however, the simple filming project stretched on until late. When they were done, the lights were turned out and off to bed they went. It wasn’t until the next morning that Melissa would learn of the magnitude of her mistake.

If you’ve ever wondered what damage two playful pups can inflict on some yarn and a partially finished Christmas gift, you’re about to find out. The next day, both dogs were shooed outside in the early morning and left to do their business while Melissa got ready for the day. When she emerged not 20 minutes later, she discovered that they had used every minute of that time alone to wreak havoc. There appeared to be a yarn explosion that began in the living room and continued out into the yard. The unfinished potholder was trapped inside, the hook still threaded into it, but the skein was nowhere in sight and there was a taught line of yarn stretched right through the dog door. “Oh no!” Melissa thought as she opened the door.

Mollie and Trigger lifted their heads at the sight of their human. Tails wagging, they bounded about the yard, clearly enjoying the game they’d invented. The yard appeared to have been strewn with yarn in such a thorough way, that her immediate thought was that a herd of 10-year-old kids armed with cans of Silly String couldn’t have done better. Not a square inch of yard had been spared. The path of yarn told the tale of every move the dogs had made. First, the skein had been dragged outside, probably in Trigger’s mouth. The paper had been crushed and torn in the process. By the loops that encircled the shrubs and the bits of paper, it looked like he’d thrashed his head around, shaking it like a tugging rope. After that, it appeared that the skein was tossed into the air, caught again and then dragged across the grass, where it unwound, gathering bits of leaves, twigs and no small amount of dirt. The tangling, switching back, looping and crisscrossing left evidence of a violent struggle between yarn and dog. The demolished skein was the unwitting victim, as was the potholder, for it had been stretched out of shape beyond repair.

It was hard to tell exactly who instigated what or which dog did the bulk of naughty work, but the damage appeared to be too much for just one, and so Melissa judiciously scolded them both. Filled with giddy exertion, they did not appear remorseful, but instead seemed proud of how thoroughly they enjoyed themselves. They trotted happily inside and stood watching from the window.

Even with the aid of a rake, broom and dustpan, it took Melissa twice the time to clean up the mess as it did for Molly and Trigger to make it. All those infuriatingly tiny bits of paper! Next, she set to detangling the yarn from the shrubs and planting beds, which gave the neighbors ample time to witness her performing impromptu chores in her pajamas and slippers, while they sipped coffee from the warmth and comfort of their homes.

Although not pleased at having to clean it all up, Melissa could only blame herself. Dogs will be dogs, after all. Theirs was a crime of opportunity. They happened upon a bundle of yarn within their reach, and simply could not stop themselves from giving in to temptation. Even dogs like Molly with proper manners will sometimes forget them when presented with the infectious antics of a puppy gone wild. Throw some colorful yarn into the mix and it’s the perfect recipe for a Christmas crochet debacle.

After all that, one question remains: Will the people on Melissa’s list ever get their crocheted Christmas potholders? Well, that depends on her tenacity for the job, and Molly and Trigger’s ability to resist future temptation.

Bath Is a Four-Letter Word