I was very confused by “The Twelve Days of Christmas” as a child because Christmas is one day, and also, you celebrate it for more than twelve days. And back in those days of yore, Christmas was generally an exclusively December occasion, so why wasn’t it, like, The Twenty-Five Days of Christmas? A less catchy tune, I suppose, but more accurate.

(Someone will email me this month and give me a lengthy history on why we have twelve days of Christmas, why those gifts were significant, why there is a song.)

Nowadays, not like those days gone by, the Christmas season begins sometime around the Fourth of July, and specific to the town of Evergreen, it lasts until mid-March, at least based on how long residents leave up their Christmas lights. Twelve days of Christmas makes even less sense (pending history lesson notwithstanding), and frankly, as an adult, I’m willing to admit how limiting it is.

Therefore, I present to you The Twelve Weeks of Christmas, a realistic portrayal of the holiday season. (Also, a request that someone write a new song, full of presents I would actually want. Five golden rings are cool and all, but what the hell would I do with a bunch of milk maids?)

Week one. It is October. If you’re lucky, the air is slightly crispier. If you’re a freak like me, you’ve noticed the edges of that one aspen leaf on that one aspen tree have crackled into a dying yellow. It is time to immediately shift every color palette and even consider redecorating the home into shades of red and gold that are reminiscent of Norman Rockwell holiday paintings.

Week two. You can’t escape pumpkin spice. Resisting is futile. If you shun it, you’ll only become bitter. They say Ebenezer Scrooge was no fan of pumpkin spice until his conversion. Lean into it. Find yourself warmed with seasonal cheer. Remember that Christmas always tastes and smells like cinnamon. Forget it’s only October and make a mental note of the first Christmas gift you will buy.

Week three. Halloween prep has become slightly distracting, but it’s just a matter of reframing. This is training ground, people. The moms at school will make sure you are invited to no less than 13 Halloween parties. Prepare to disappoint them and your families with your inability to be in five places at once. The hustle and bustle starts now. You will be sure that there is plenty of time to buy candy, to find costumes—there isn’t. You’re already behind. Let that stress sink in and motivate you.

Week four. Let the holiday eating begin! Make plenty of jokes about hiding away the kids’ candy so they can’t find it. We are all digging through the bowl for the last fun-sized Twix once the littles are asleep. That first bite of chocolate and caramel is ceremonial; look forward to feeling guilty about your sugar consumption for the rest of the year.

Week five. Commercially speaking, it is Christmas. This is the window of anticipation. You can admire the trees and twinkle lights popping up in shops without any measure of panic. It’s simply something pretty to think about, that cinnamon scent wafting from somewhere in the future. You’ll never love Christmas more than you do during this time.

Week six. Learn which family members are coming in for the Thanksgiving holiday. Realize how few days you have left before the kids are off school for a week. Now panic.

Week seven. Annually, this week is solely for confusion, or a fun little guessing game, depending on how you look at it. Is Thanksgiving this week or isn’t it?

Week eight. Ruminate a lot on Santa’s weight and his accompanying jolly demeanor. Decide to try on this persona because there is no recovering from a Thanksgiving meal when there are cookies to bake now. Folklore suggests that egg nog was actually invented sometime within week eight—how else could someone justify drinking straight cream and raw egg?

Week ten. You should only be listening to Christmas music. You turn on the radio and think that if you hear Bing Crosby croon “Mele Kalikimaka” one more time you will run your car into Evergreen Lake, but by the time you’ve backed out of your driveway, you’re singing along. Ah, nostalgia!

Week eleven. Awww, enjoy this magical week with all of your meals planned and groceries purchased, all the gifts wrapped with glittery bows and tucked under the tree, the perfect ensembles selected for your various made-for-television gatherings where people only pleasantly smile and never ask anyone any uncomfortable questions.

Week twelve. The air is still and oddly cold. You keep finding scraps of wrapping paper under the couch. There’s no place to put anything—not in the closet, not the fridge, not your body. And there is absolutely nothing but pressure to make New Year’s Eve completely fabulous. When the ball finally does drop at midnight, feel free to implode.

Well, there you have it. I leave you somewhere in the middle of week ten or eleven, wishing you the best of a luck, a merry Christmas and a happy new year!

Tequila Mashed Potatoes (and Other Tips for a Great Thanksgiving!) 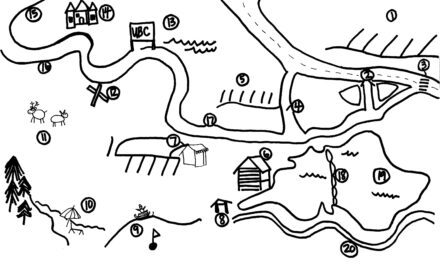 A Tourist Map of Evergreen

The Great Circle of Life