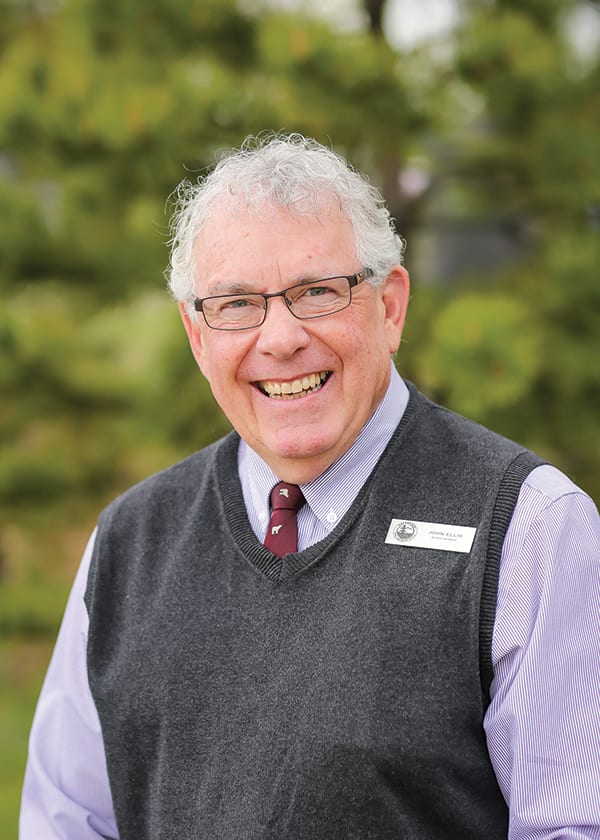 Having a conversation with John Ellis is not unlike watching a documentary of Evergreen. From Bergen Park to Kittredge and Conifer, he’s known the families, the buildings, the businesses and the many nonprofit and civic organizations that have made up this community over the past 70+ years.

John was literally born and raised here. “Due to a snowstorm, I was delivered at home and went to the hospital the next day,” he said.

In the 1950s, his grandfather was, among other things, a magician. He traveled for International Harvester and performed at shows the company held to sell products to farmers and ranchers. He built the Magic Inn, a bar and restaurant in Bergen Park, which later became The Whippletree, then Cedar 65 and is now Parkside Cafe.

“He brought the back bar, with stained glass panels that light up, from Chicago. My family lived in the back of the building,” John shared. He can show you the spot where his crib stood.

When John attended Wilmot Elementary, it was in the building that became Evergreen High School, and the Junior High School was on the site of the Evergreen Library. “My third- and fourth-grade classroom was also my classroom my senior year,” he said. “There was no auditorium until 1964. Before then, the lunchroom was where we held plays and had gym classes. Lunches were made fresh out of the oven each day by cooks who were moms of students. Breads, lasagna, pizza, pies.”

John was Head Boy, basically head of the Student Council. That meant he was the MC for every event. He was also captain of the football, basketball and baseball teams. “Evergreen teams were known as the Cubs. Our mascot was a mean, vicious-looking cub before it changed to the Cougars,” John recalled. “For one year, our lockers were in the basement of the old brick building where the Evergreen Library is. We had to run from there up Buffalo Park Road to the practice field. At one time, the fields were being worked on and we had practice at Alderfer Ranch (3 Sisters). Hank Alderfer and I would go early to shoo the cattle out of the way. Boy, were we all in good shape.”

John fondly remembers all the ranches and horse stables in the area, having worked at many of them. He helped hay at Flying J Ranch on Hwy 73, where a classmate lived. Joe’s Stables were on Buffalo Park Road just off Hwy 73 and the T Bar S was on Upper Bear Creek. Mountain Home on Meadow Drive was a cattle show barn. The site of Kittredge Auto was a horse stable and people rode in Kittredge Park.

Several families, including John’s, leased the Hiwan Stables. The Blue Quill Angler building was their workshop and The Wood Cellar was their barn. They would shoe horses out back and take care of irrigating Elk Meadow and Noble Meadow so they could hay them. They also branded and fattened up the cattle in the summer for Monfort feedlots. (Now he teaches flycasting for Blue Quill Angler, which he says is a lot easier.)

John grew up doing lots of odd jobs—whatever people needed. “That’s how things got done. Families got together and helped each other. You couldn’t just look for help in the Yellow Pages,” he said.

He did yard work. He parked cars and served food at parties on Upper Bear Creek for the summer residents there. He bussed tables and watered the greens at Hiwan Golf Club. “It was good money. And we’d sneak in and swim in the pool at night,” he said. At age 12, he worked as a busboy at El Rancho where his mom was a hostess. John recalls selling peanuts and popcorn in the stands and running the gates at the rodeo grounds, which were then located on the Xcel Energy lot.

“Every spare minute I had, I was fly fishing in Bear Creek. Or having a hamburger at The Hut on the corner of 74 and Douglas Park Road,” he said.

John remembers many of the earliest businesses in town. The first grocery store, Thrifty Market, was in downtown Evergreen at the light. Baskin Robbins was a gas station. Safeway opened on Meadow Drive.

There was a clock museum and a small amusement park with bumper cars, an airplane ride and a coal-driven train in Bergen Park in the 1950s. The first movie theater called the Trails Inn was on Douglas Park Road in the Saigon Landing building. “I saw Doctor Zhivago and lots of Elvis movies there,” he said.

John has far too many memories to share in this space. Other than going to college in Greeley and a brief time in Kansas City looking after a family business, he has spent his whole life here. He got married and raised his family in a home on Old Squaw Pass. He worked for many years as the ad director for the Canyon Courier, and then as director of community outreach for Evergreen National Bank.

When asked about all the development that has taken place over the years, John said, “I never think it’s ‘bad.’ There are so many stories, so much history of our town. I love getting to know all the people in all the different groups and how they come together. It’s all interconnected.” He sees much of the change as necessary improvements. For example, the work diverting the creek from the dam through downtown Evergreen to Kittredge so it doesn’t erode the hillside; the plans to make walking from downtown to the library safer; and improvements to the trail through and around Evergreen Lake.

He especially loves the sculptures around town—the wire horse, Oliver, outside the RE/MAX building on Stagecoach because it is a way of welcoming people to the rodeo grounds, and the girl holding all the books outside the Evergreen Library. “That’s what my wife always looks like coming out of the library,” he said.

“My love is everything Evergreen, and to promote our great community wherever I can,” he said. “What a wonderful and beautiful place to live, and grow up and be part of.”