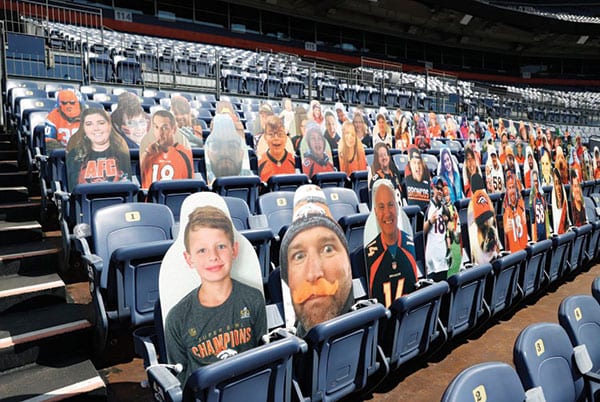 When professional sports resumed in July, it was with major changes, just like the rest of society. Baseball, slated to begin in late March and run 162 regular season games, didn’t start until July 23. Among numerous changes were a 60-game season, expanded playoffs, a universal designated hitter, seven-inning games for doubleheaders, and the use of a rule more commonly used in recreational softball leagues to settle extra inning contests. In the place of live fans, games have been “attended” by cardboard cutouts of fans, former players and pets of current players.

The NBA and NHL halted operations in early March and didn’t resume play until late July. An in-season gap of over four months is peculiar enough. But there were numerous other unique touches for 2020 as well.

NBA teams reported to the “bubble” in early July, with games starting back up on July 30. All returning teams were housed at Disney World Hotels, with all practices and games conducted at the sprawling ESPN Wide World of Sports Complex outside of Orlando. The extreme concept has been effective, with very few cases of COVID-19 occurring while players have been in the equivalent of isolation. Fans were unable to attend games (outside of virtual fans shown courtside on giant screens) until late playoff rounds, and then, only a limited number of friends and family members. As of this writing, Lebron James and the Los Angeles Lakers led Jimmy Butler and the Miami Heat three games to two in the NBA Finals. The season will end in one or two more games, roughly one year after it began.

Professional hockey resumed about the same time as the NBA, with all teams staying in the “pod cities” of Toronto and Edmonton. The league apparently knew what they were doing when it came to health protocols, as not a single case of the virus was reported during the two-plus months in the pods. The Tampa Bay Lightning captured the Stanley Cup by defeating the Dallas Stars in six games, almost a year after opening day.

The NFL began the season in September as scheduled, but with zero preseason games, as opposed to the usual four. The phrase, “soft tissue injury,” has become a regular part of the NFL lexicon, as muscle and hamstring pulls are more commonplace as a result of the shorter than customary preparation. In recent weeks, positive tests among players and staff have started to arise, leading to the need to reschedule multiple games. Broncos games had been unaffected through Week 4, other than the home opener being played without fans, and 5700 allowed to attend in Week 3. The cast of South Park also attended, in the form of cardboard cutouts. Denver’s fifth game against the Patriots was moved to a rare Monday afternoon start due to some positive tests among Patriots players.

Now, let’s take a look at how my predictions a couple of months back for the local teams and Yankees panned out.

The Yankees and Rockies got off to the quick starts I forecasted. Colorado rode surprisingly strong pitching to an 11-3 start, raising the hopes of fans like myself. With the season cut to 60 games and 16 of 30 teams qualifying for the playoffs, prospects looked bright. Then, the roof caved in, largely under the weight of a horrendous performance from the bullpen. The Rockies went 15-31 the rest of the way, and once again, it is a case of wait ’til next year.

The Yankees (bear with me, I’m a New York native) won eight of nine games to open the season and looked like they would tear through the abbreviated season. But injuries to key players set in, and the team was mediocre the remainder of the regular season. They did earn a wild card berth and defeated the Cleveland Indians in the newly added best of three opening round of the playoffs. The Yankees were then eliminated by the Tampa Bay Rays in a best of five series that ended their season.

The Avalanche looked poised to make a championship run, dominating the Arizona Coyotes four games to one in the first round of the playoffs. Colorado fell behind Dallas three games to one in Round 2, and lost the services of their top two goaltenders before rallying to force a deciding Game 7. The Avs took a 4-3 lead with under 4:00 remaining, but the joy was short-lived. Dallas tied it just 10 seconds later, and ultimately won the game in overtime to advance.

The never-say-die Nuggets provided a multitude of thrilling moments during their run to the Western Conference Finals round. Denver fell behind the Utah Jazz three games to one, and were written off as done by most experts. The team staged a miraculous rally to win three straight, capturing Game 7, 80-78. The series was clinched only when a potential game-winning three-point attempt by Mike Conley of the Jazz spun out of the rim at the buzzer.

Facing the heavily favored Los Angeles Clippers in Round 2, the Nuggets once again fell behind 3-1. Amazingly, the Nuggets pulled their Lazarus act again, becoming the first team in NBA history to overcome a pair of 3-1 deficits in the same season. Alas, the championship run fell short, as the Lakers put an end to the Cinderella story, eliminating Denver in five games.

Hopefully, the NFL season will proceed without too many stops and starts, and with players staying healthy. Major league baseball is embracing the bubble mentality, with all remaining playoff games being played in Texas or California to limit travel and lessen the chances of an outbreak.

High school and college sports have been dramatically affected by the pandemic, with some seasons cancelled or postponed. I would love to hear from some of the local student athletes out there willing to share their stories. If you would like to tell me about how you’ve dealt with the changes and challenges you have faced, feel free to e-mail me at ​chazhudd@hotmail.com and I’ll devote my November column to the topic.