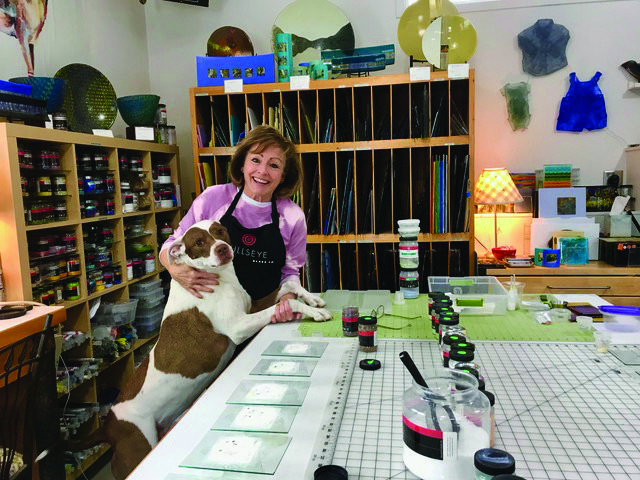 “I was astonished at the amount of forethought, effort and detail that goes into a single piece of glasswork.”

After having interviewed many artists, I’m noticing a common theme—true success arrives when your “work” becomes something you enjoy doing. Often, attaining this belief does not come until later in life, after years of various experiences. So is the case for local glass artist Patti Gill. For over an hour, Patti shared her life and craft with me and never did the genuine smile leave her face, nor did the excitement in her eyes. This is a woman who loves her “work.”

Gill, the youngest of three girls, was heavily encouraged by her mother to become an artist. During her preteen years, her mom signed her up for every art class she could imagine. But Gill’s heart wasn’t in it. She would rather spend time with her friends doing things that kids did. She never did explore art further until much later in life. Instead, she earned an engineering degree from the University of Toledo and followed in her father’s career path.

Initially, this was surprising to me as I glanced around at her bright studio filled with masterful glasswork. But, after some thought, it made perfect sense. Engineering sciences require the right side of the brain to order, align, prepare and calculate—all the skills necessary for creating kiln-formed glass art. Gill discovered this parallel during a simple day of shopping.

While visiting her sister in Nova Scotia, Gill stumbled upon a glass gallery and was absolutely captivated. The detail, color and glossiness of the pieces spoke to her heart; she had to learn more about the process involved in creating such beauty. It was then the epiphany hit her, glasswork was the fusion of both sides of her—the engineer and the artist. She needed to create and was ready to learn more.

Gill left the engineering world to focus on her newfound passion. In order to hone her skills, she took master classes from artists from all over the world to learn a multitude of glassmaking techniques and methods. Each lesson added to her tool belt and before long, she found her own voice in the art of glasswork. However, it wasn’t overnight.

The beginning years for Gill were about trial and error, yet always repurposing that which went awry. She spent hours daily exploring the craft of kiln-formed glasswork and the laborious, time-consuming processes involved in creating a single piece. Gill’s first kiln was in her basement laundry room. Before long, she needed to expand into another room, then wound up in the garage for even more space. She decided to buy a studio in Evergreen once her car could no longer fit in the garage. Gill now owns five kilns and over 100 tons of raw glass in her current studio, a mere 50 feet from the front door of her Evergreen home.

I was astonished at the amount of forethought, effort and detail that goes into a single piece of glasswork. First, she lays out the design she’s looking to create with a chosen glass type (sheet, stringer, rod, etc.). Second, she’ll decide on a technique (blast, sand, grind, etc.) to get the envisioned outcome, and then methodically prepares it for the kiln. She fires the kiln to its appropriate temperature, of which varying degrees produces different outcomes. Third, after a 12-hour kiln firing, she removes the piece. As Gill says, “It’s like Christmas morning every time!” Oftentimes, a second or third round of the above steps is necessary to achieve the detail or look she desires, creating a unique piece every single time.

Gill’s glasswork needs to be seen in person to experience it. Some pieces are inspired by local nature, such as the smaller transparent aspen tree scenes with beautifully intricate detail. Or her decorative bowls of kaleidoscopic colors that sing with happiness. Gill’s most challenging larger pieces demonstrate her mastery with such minute detail, one cannot help but to stop, observe and wonder, how did she do that?—a true sign of someone who puts heart into her “work” and relishes the artistic life she created for herself.

Patti Gill opens her studio annually for visitors during the Evergreen Open Door Studio Tour in September and during her Holiday Sale in December. Her work can be seen at Shadow Mountain Gallery in downtown Evergreen, or you can reach her at pattigillglass@gmail.com. 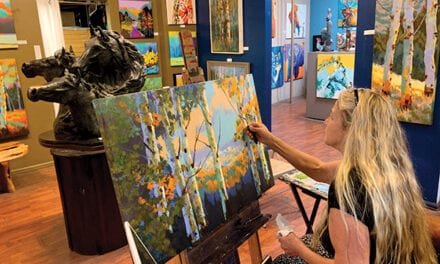 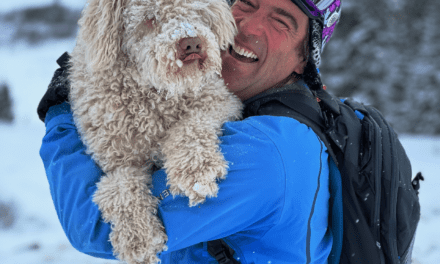