Recap of Chapter 13: Haze was worried about participating in the annual Open Door Studio Tour. After all, it had only been a year since she had come to Evergreen. Was it too soon? She worked tirelessly to create a display to showcase her Colorado wildlife-inspired art. Even Sydney and Jake helped. It turned out, she had nothing to worry about. At the end of a surprisingly successful weekend, watching Jake, Sydney and Crowley heading toward her to celebrate, Haze was awash with love and happiness.

“No peeking,” Jake warned as he shuffled behind Haze with his hand over her eyes.

“I’m not peeking,” she said, “but if you don’t let me watch where I step, I’m afraid I’ll trip and bloody my lip or worse. Can I at least have my eyes open if I promise not to look up?”

Jake released his grip so Haze, watching her feet, could move forward safely. The sun hadn’t fully risen, but it was bright enough to see in the early light. “Where are you taking me?” she said for the hundredth time, giggling as he steered her by the shoulders. The rocky terrain in her view was covered with pine needles, small shrubs and moss. It could be anywhere in Colorado. Crowley bounded in and out of view, but she could hear his breath and footsteps. He was having a great time exploring off leash. They hadn’t traveled far from the cabin on the car ride over, so she guessed they were still in Evergreen. She couldn’t imagine what Jake was up to, but he had a plan, that much was certain.

He had awakened her by passing a hot cup of coffee under her nose as she lay sleeping, like waking a cat with food. He was already dressed and in full adventure mode as he put both their cups on the side table and lay down next to her on top of the covers. “Mmm,” she mumbled. “That smells wonderful.” She nestled her head deeper into the plush pillows. “Bed loves me this morning.” He brushed a lock of hair off her face. She opened her eyes a tiny bit and smiled up at him sleepily. Then she frowned. “Why are you dressed already?” she complained. “It’s so early.”

He kissed the top of her head. “Well, I have a surprise for you. So, sip your coffee and wake up. I’m all packed, and Crowley and I are ready to go.”

He jumped up. “You’ll see. It’s a surprise.” He handed a mug out to her. “Come on. Sit up and take a sip. Then get dressed.” He waited until she begrudgingly sat up and took the cup. “I have a couple more things to do while you get ready. Come on, we’re wasting daylight.” He pinched her big toe through the covers and left the room.

Haze took a sip of coffee, which tasted wonderful. Then, she glanced at the clock. 6:15 am. On a Sunday? The sun was barely rising. “There isn’t any daylight to waste,” she grumbled. She shook her head and swung her legs over the side of the bed. “Unbelievable.” It was chilly in the room on her bare skin. She slipped on her fuzzy robe and shuffled over to the closet. “How should I dress?” she shouted into the air. No answer. She shrugged, then slipped on jeans and a t-shirt. Over that, a soft flannel shirt and hiking shoes. No surprise at 6 am requires dressing up. And, knowing Jake, it would probably involve hiking or camping.

That was over an hour ago, covering who knows how much ground. “I suspected you wanted to take a hike,” Haze said, dutifully keeping her eyes down, but why does it have to be so early?”

“You’ll see. Just a few more steps.” Then he halted her abruptly. “Okay. You can stop now but keep your eyes down. No peeking.” He stepped around in front of her. “Actually, close your eyes. Yeah, close ’em and keep ’em closed.” She covered her eyes with her hands. “Closed.”

Jake took several steps backward to make sure everything was perfect. He looked over his shoulder and back at Haze. Wearing his barn jacket over her flannel, which was huge on her, and covering her eyes with her hands, she looked so small, almost like a little girl. The sight of her made him smile. He slouched off his backpack. “Eyes still closed?” he asked, as he snapped a wool blanket into the air.

He took out an old-school plaid thermos and a thermal bag that held two tinfoil-wrapped breakfast burritos and a couple red handkerchiefs for napkins. He arranged them on the blanket, ordering Crowley to sit so he wouldn’t snitch any food. After everything was set up to his liking, he stepped behind her, wrapped her in his arms and pulled her in close. She sighed and folded into his warmth. “Can I open my eyes yet?” she said, softly.

With one more warning look at Crowley, he whispered in Haze’s ear, “Okay, pretty lady, open your eyes.”

She opened her eyes, blinking. “Aw,” she said, looking at the picnic spread out before her. “It’s beautiful!” He had set it up on a flat spot by a rock outcropping. Crowley was sitting off to the side, his front paws dancing as he shifted, anxious to be released from the sitting position. “He’s being such a good boy!” she said. “Come here, Crowley. Come here, boy!” She praised him and petted his fur while he bumped and leaned against her legs.

“Well, come eat,” Jake said, pulling her over to the blanket. “I brought hot chocolate and a couple breakfast burritos from that drive-thru you love so much… ” She was ear-to-ear smiles as he poured cocoa into the plastic lid. “I can’t believe you did all this,” she said.

“There’s more,” he said, as he crawled on the blanket to position himself behind her. “More?” she asked, leaning against him with the cup of hot cocoa.

“Do you know where we are?” he asked, just above a whisper in her ear. She paused and looked around. Then, she smiled. “Not really. Someone made me close my eyes the whole time. But you do, don’t you?”

He nodded. “Remember how you told me that you chose Evergreen because your parents started out here?” She nodded. “And do you also remember that they used to picnic out in the woods with a thermos just like this, at a special spot just to watch the sunrise?” 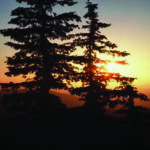 “I do remember that,” she said. “I chose here to settle down because they loved starting out here. I wanted to capture some of their happiness in building my own life. I’m surprised you remembered.”

“Of course I remembered,” he said with mock indignity. “That’s why I picked up this thermos when I spotted it at a garage sale.”

“But that’s not the ‘more’ part I was talking about. The ‘more’ part of this little excursion is that this is a likely spot, if not the very spot, that they came to watch.” She twisted her head around to look up at him, a question in her eyes.

“This spot happens to be within walking distance of Hazel Drive, which is in that direction.” He pointed to the distance. “And right over there,” he said, pointing to a spot through the trees, “is why we came here.” She looked in the direction he pointed. “Wait for it… ” he said, building up the anticipation. “Wait… and here it comes.”

Haze gasped as the sun rose to peek through the trees up on the hill. And suddenly, salmon colored light filtered through the branches, rays of color reaching like fingers to touch down on leaves, rocks and fallen tree trunks, until it landed directly on the blanket where they sat. And then it crept toward them, painting Crowley’s fur, their feet, up legs and arms, and finally onto their faces where they sat snuggling cheek-to-cheek. Warmth came with it. Haze’s face, awash with golden-pink sunlight, turned toward Jake. She was smiling—a smile of pure joy, her eyes twinkling.

“There’s the face I wanted to see in this spot at exactly this time,” he said, his smile matching hers. “I knew it would be worth it. This is what I would call a storybook setting. The colors of the sun on your beautiful face and the growing warmth it creates is how I feel about you. Beauty and warmth is what you are.” His expression grew soft yet serious. “This is how I wanted it to be when I first told you what I’ve been feeling.” He kissed her lips gently. “I love you, my Hazey girl—every part of you—your talent, your drive, your kind heart, even your reluctance to leave a warm bed on a Sunday morning.” He chuckled and squeezed her tighter. “You have carved a place in my heart that can never belong to another.”

Tears welled in Haze’s eyes as warmth spread through her. A big smile crept onto her face as she gazed into the eyes of this man—this man of innumerable great qualities; this man, who had gone to such lengths to create the perfect setting to profess his feelings; this man, who had grown so large in every part of her life. She kissed his lips and spoke the words her heart already knew to be true. “I love you too.”