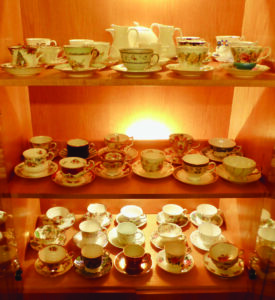 Collecting is one of the most widespread hobbies in the Western world; the U.S. is said to have over 50,000 collecting clubs of various persuasions and it’s likely the number of collectors runs into the millions. It used to be a popular childhood occupation that today has probably been largely superseded by computer games and social media interaction, but people can and do still collect anything and everything. It can be one of the least expensive yet absorbing occupations, providing a reason to seek out what is collected or to research information related to the collection. It can be a hobby for one person or something a family of all ages can participate in.

Modern collecting dates back to the 16th century when “Cabinets of Curiosities” became fashionable in high society. Their purpose was to display “wonders” and extraordinary objects, often derived from natural history, that would provoke delight, astonishment or horror, and provide topics of conversation. Professional collecting has always been linked to study—research and the sharing of new knowledge via museums and erudite societies. We would not have the enormous variety of flowers, shrubs and ornamental trees without the botanical collectors who roamed the world, and neither would we know so much about the exotic fauna to be found in its secret places.

There have been many reasons advanced as to why so many people feel the need to collect. Learning and the acquisition of knowledge through the exploration of the history, culture, technology or arts associated with any particular collecting avenue is certainly one. So too are the status afforded among like-minded peers that one’s collection affords, the competitive challenge that arises out of collections compared, and the social interaction that can come from shared pursuits. There are the factors of relaxation, stress reduction and plain fun and happiness that can arise out of the acquisition, reordering and cataloguing of a collection and reliving the memories that go with the hunt for particular items. Some collect for investment, from coins to cars, though this is more about wealth accumulation than collecting per se. Still others speculate darkly about the deep psychological needs of collectors—the desire to bring order or simply to “possess”—though how rewarding possession would be in collecting air-sickness bags, for instance, is hard to figure. I suppose they can answer a deep physical need, though, and if you’ve a mind to, you can visit the site1 and peruse the captions by the curator of the collection of over 3,000 unique bags.

What actually constitutes a collection? Merriam-Webster defines it as “an accumulation of objects gathered for study, comparison, or exhibition, or as a hobby.” The Concise Oxford agrees, but adds that a collection is “systematic.” Surprisingly, there is no mention of the number of things needed, though one source suggests that one thing is a curiosity, two are a coincidence, and that three things are a collection, “always provided they are acquired because of their relationship to each other and there is interest in them.” Another ventures that any plural number is a collection, while still another argues that none can actually be a collection, too, since he had a small collection of antique firearms that were stolen, but they probably still exist somewhere as “his collection.”

For every collector of attractive or valuable things, there are others who collect tuna can labels or, well, mold. A sample of penicillium mold, gifted by Alexander Fleming and accompanied by his note and signature, sold for the equivalent of nearly $20,000 in 2017. Beauty, remember, is in the eye of the beholder. The fact is, there are collectors enough to collect anything under the sun, but there are also those (presumably non-collectors) who classify collecting as a pathological illness. To counter that, a large 1998 study by Professor Susan Pierce of the English Museum Studies group, “Collecting in Contemporary Practice,2” found that a quarter to one-third of adults (in Britain) class themselves as collectors and that they are statistically classifiable as totally normal (as normal as Britons get, I suppose). The psychology literature agrees that collecting is a widely observed human behavior that is benign, socially constructive and normal. One correspondent describes collectors thus: “bright, clever, functional, productive, at least as happy as non-collectors, successful, handsome, beautiful, entertaining, and lots of fun.” Of course, he is a collector and probably just ran out of superlatives.

There’s a difference, however, between collecting and hoarding. The latter was classified as an official mental illness in the Diagnostic and Statistical Manual of Mental Disorders of 2013. The A&E network has been running shows about hoarders since 2009 and the latest version began airing just last July. Reality shows seem to have become mildly akin to the yesteryear freak shows of traveling circuses, but at least this one comes with professional psychiatrists and organizers to coach and assist the protagonists in their plight. A collection requires a definable topic or theme and involves systematic goals, plans and focus: the hunt, active selection, insight and introspection, organization or orderly display, cataloguing, storage and, when necessary, disposal of excess items. Hoarding is like collecting gone rogue. The acquisition phase has similar aspects and benefits, but hoarders are incapable of organizing or discriminating between their objects or disposing of no longer wanted items to the extent that their mounting acquisitions cause distress, dysfunction and a hazard to health.

Somewhere between collecting and hoarding lies “accumulating.” A collector remembers a woman’s house whose available surfaces were covered with various forms of hippopotamus, even the edges of floors, however, they didn’t dominate necessary areas like walking spaces, cooking surfaces or beds. There was a clear theme (anything that looked like a hippo) and they were lovingly displayed (dusting must have been a bear!). There was a plan—buy or receive, in vast numbers, anything like a hippo. However, there was apparently no discrimination or attempt to catalogue or improve the group by discarding poorer versions. Hippos only entered her house and never left. It wasn’t hoarding or an organized collection per se, just an accumulation of like objects. I’ve known people do this with owls or giraffes and it makes thinking up gift ideas so much simpler!

In the end, it is likely that the core nature of collecting lies with the collector rather than the collection. It doesn’t matter what people collect, it’s the collecting frameworks and associations that matter. I do not count myself an avid collector, but I confess that over the many years since early childhood, I have built small groups of various things of no great value that have interested me from time to time: stamps, cigarette cards and packets, minerals, coins, beer mats and old bottles, for instance. Collector or not, if you have an hour or four on your hands this Christmas, I heartily recommend you explore the collection and taxonomy of occlupanids to be found at the Holotypic Occlupanid Research Group (HORG).3 Suffice it to say, no bread bag is safe—who knew?!

Wishing everyone a safe and healthy Christmas and a better New Year.