Last month, Holly and I took her mother’s Ford Fusion in to get the rear turn signal fixed. Seems pretty simple. Replace the burned-out bulb, right? Are you sitting down? Because of the fancy new LED design, the entire assembly had to be replaced at a cost of about $300 before installation! And, the assembly had to be ordered from Ford. And, it still hasn’t arrived. That’s progress for you!

Returning home, I found our ’99 Tahoe with the very same disease. So, off to the auto parts store and the very apologetic man at the counter. I had to buy, due to the packaging, two bulbs for $8.95! Thanks to a YouTube video, I installed the new bulb in under 15 minutes. YouTube is a godsend for DIY auto repair!

Cambridge dictionary defines progress as “movement to an improved or more developed state.” Webster simply defines progress as “gradual betterment.” How can anyone not be in favor of progress? We all want things to be better. And indeed progress has massively improved the human condition since the early days of cavemen when the average human lifespan was around 35 years.

However, progress has also kept us busy cleaning up all of its unintended consequences. Most progress evolves without any oversight at all. Especially the concept of worrying about future unintended consequences. Progress just happens, whether or not we humans appreciate the supposed benefits. And then we are forced to adapt, since progress is like the old saying, “You can’t put the toothpaste back in the tube.”

Take the internet, for example. I’m sure that the inventors of the internet, Vinton Cerf and Bob Kahn, the founder of Facebook, Mark Zuckerburg, or the founder of insanely popular TikTok, Zhang Yiming, never wasted a single moment worrying about their brainchild’s unintended consequences. Yet here we are….

We need an entire industry of experts to protect us from the evils of hacking. Another industry to insure us against identity theft.

Now that we can’t put the internet back in the box, we have to devote a huge amount of time to just staying connected. Holly and I have kind of divided up techie responsibilities. She handles Sonos and streaming entertainment. I handle keeping our connection alive. We both struggle with keeping email working. As I have previously pondered, it must be that the elderly and non-technical people are pretty much excluded from this area of “progress.”

The most serious unintended consequence of the internet might be how the effect on our children may affect the future of humanity. We have a whole generation growing up with little human contact except for their phones. There is no more “Let’s meet at the park and play football.” Or, “Let’s go for a hike.” They are failing to develop relationships where you can look a real person in the eye, hold hands, give hugs, or see emotion without a phone.

Once again, I have identified a problem without a solution. I hope I am wrong.

With a master’s in electronic engineering, Doug worked for major companies in that field before switching to real estate for 12 years. From that experience, he hatched the idea for Colorado Serenity and never looked back. Over years past, Doug filled his spare time with mountain climbing, skiing, cycling and programming. He now fills his time working with his longtime girlfriend—now wife—Serenity editor Holly Jorgensen, making Serenity the best it can be while occasionally running off to favorite Colorado hideouts.

The Peace of Silence 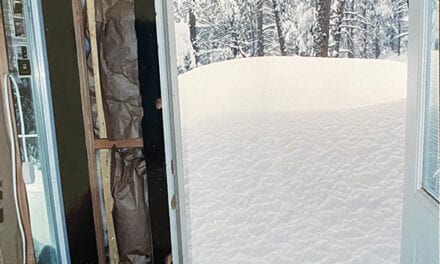