“ …the woman was viscerally connected to the trail for more reasons than she could explain.”

A mostly true story inspired by the following excerpt from Philip Levine’s poem “A Story:”

a mother who stood
at the sink at all hours
and gazed longingly
to where the woods once held the voices
of small bears—themselves a family—and the songs
of birds long fled once the deep woods surrendered
one tree at a time after the workmen arrived
with jugs of hot coffee.

“26 Luxury Homesites for Sale,” the sign boasted at the bottom of the dirt road. It had a colorful sketching of large houses in the background as well. At the top of the road, once fervent with majestic pine, spruce and fir trees, was an abnormally large clearing that bustled with yellow, heavy-duty building trucks—a child’s sandbox dream. Just the day before, it seemed all was calm, normal and peaceful.

The woman had passed the sign approximately 20 times a week as she raced to drop one of her kids off at various activities. Every time she viewed the foreboding thing, she’d think, weren’t neighbors supposed to have a voice in such a huge undertaking? Certainly this would not be allowed! The thought would blink across her mind as she continued her mental grocery list for dinner that evening.

Later, she learned from a friend there was a notice inviting residents to voice themselves; it was written in minuscule font, in the back of the small-town’s newspaper, of which few have time to read. The “request for feedback” was also posted on the third page of an obscure website linked to a QR code found on a pamphlet mass-mailed last September. There were rumors that swelled through the surrounding neighborhoods, but no one inquired much or took action. After all, 26 homes seemed quite ludicrous, considering the small space on the side of a mountain.

She wasn’t ignorant to the truism that when such large things begin to encroach on one’s own personal space, ears perk up. Her fear became immediate when she considered “her trail” in proximity to the “26 Luxury Homesites.”

There was a lazy trail that meandered out the back door of her mountain home, through the woods into open air where the sun would warm her face and the distant vistas reminded her to breathe and pay attention. It was her place of solace, the space her pups would gaze at longingly from the sun porch aching for another walk. And when she’d sit to put her hiking boots on, all three mutts would hop and spin, bark and wiggle until the whoosh of the sliding glass door, when they’d bolt like thoroughbreds at the gate.

The trail welcomed the woman and her dogs most days of the year. Sometimes she’d invite a friend and their dog(s) for company, and they’d laugh and obsess over the roller coaster of parenting and life. Many hikes were without dogs entirely, intended to absorb the peace of the trees and calm her natural anxiety. The path would also become her avenue for fitness and strength as the sweat would drip with each swift step. “Her trail” was so much more than packed down dirt leading to beauty. In fact, the woman was viscerally connected to the trail for more reasons than she could explain.

It was used as an escape during hot and overwhelming guest-filled holidays, where an unannounced exit into the woods for 20 minutes would bring back her sanity. The trail was her therapist as she listened to countless phone conversations with sobbing friends and beloved ill-stricken relatives no longer living. It was her moment-catcher, like the afternoon she and her husband laid on their backs in the raw thicket and watched the once-in-a-lifetime full lunar eclipse behind goofy black glasses. The trail was her time machine, as in the summer her brother visited with his wife and young boys (5 and 3), when her nephew’s heads bopped amongst the kaleidoscope of wildflowers as the cotton candy sunset softened everything with pink—reminding her of years past when her own children would proudly present her with bouquets flowing with blue columbine, larkspur and Indian paintbrush.

Mostly, in a world where she gave so much of herself, the trail was her place to pause and separate from being needed as a mom, wife or teacher.

It was 8 am on a Wednesday morning in the early part of summer, when the irksome sounds of construction invaded the woman’s meditative morning walk. She stopped mid-stride and focused her hearing in the direction of the obtrusive clamor. Separately, she identified the pounding of jack hammers, workers yelling over crunching machinery, dirt diggers, and the beep-beep-beeping of large trucks. Then, the thunderous dump of rocks and dirt that shook the ground and rattled her soul. Together, the sounds were a cacophony of the devil’s sort, especially when the incessant hammering began. She gravitated toward the noise and there it was, like discovering a heap of mouse droppings near the back of a bread drawer, the very first home being built—only 200 feet from her trail.

Doing the math made her heart race: “26 Luxury Homes,” with an average of four people living in each, she figured, would equal over 100 additional humans with access to her trail. 100 more people who will leave their dog’s excrement in blue or red bags along its fringes. One hundred newcomers who will expect her to keep her dogs on a leash. One hundred or more nature lovers who will be in awe of her beloved trail and go on to tell their friends and family. One hundred plus “neighbors” she never cared to meet.

“SOLD OUT!” screams the sign at the bottom of the road which was recently paved with slick black asphalt before the swinging steel gate was installed. Sold out indeed, she sighed as she drove past it for the last time.

Prelude to the Bliss 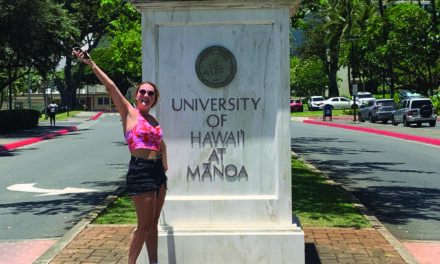