Jane Austen once said, “Without music, life would be blank to me,” which poetically and accurately points out how music fleshes out life. It’s a thing that we might not notice unless it’s missing one day, and the next, a song could stop us in our tracks. In a sense, music is folded into our lives in a necessary way, and like the most meaningful stuff of life, in an unexpected moment, it will strike us with wonder.

As Kittredge-local singer and songwriter Patrick Dethlefs says, “Music is this everyday thing that is so easily accessible but I don’t think that takes away any of the magic.”

As simply as we’re in the mood for a song and can turn to the internet to play it, so does Dethlefs find that music makes communication easy. “I think music has this ability to capture or create a feeling, and something very universal can be said in a simple or complex way. You can listen to a song and think, this perfectly describes what I’ve felt or am feeling. I often find myself hearing something and thinking, wow, I wish I could’ve said it that perfectly.”

Which is a feeling we’ve all shared—but Dethlefs translates the sentiment into his own music, and has done so for years. “I wrote a handful of songs in my early teenage years but found myself embarrassed and quickly discarded them. It wasn’t until later in high school that I had written some songs I deemed worthy of keeping.” His venture into songwriting was a natural progression, growing up in a musical household, with his father always playing guitar and singing. Dethlefs went the route of trumpet to begin with, but that was quickly trumped by the gift of an electric guitar. “From there I found myself obsessed with music. I couldn’t think of doing much else.”

Dethlefs’s process of songwriting is equally if not impressively organic. “Most of my songs have come from just picking up a guitar and playing around until something catches, then a melody starts to form and eventually some words fall out. A lot of the time, I don’t really know what a song is about until I’m well into the writing. I’ve never really gone into writing a song with lyrics first—I’ve always kind of let the melody guide what words I end up singing.” When things aren’t flowing as easily, he says there’s never any shortage of inspiration to be found in other musicians’ work, especially his own friends. “My friends who I play music with are the biggest influence on my creativity,” he says. “Colorado’s music scene has always felt welcoming. The support and slight nudges I’ve received from the friends I’ve made making music have kept me going, and a lot of what I’ve done wouldn’t be possible without them.”

Now Dethlefs plays shows around the area. He believes it’s an important part of the process. “There’s something very special about seeing music live. You have the performer and the audience both contributing to this moment. Everyone is having their own experience but also a very similar one, and in the end creating something much bigger than themselves.” But it isn’t so much the performance that Dethlefs lives for as the music itself. “I’d like to think I’ll always play music—it would feel wrong not to, at least in some capacity. Whether it’s for myself or for others, it feels like a really important part of who I am and how I make my way through life. I hope to keep writing and releasing music, getting better and pushing myself creatively.”

Download Dethlefs’s music and track his concert schedule at patrickdethlefs.com. 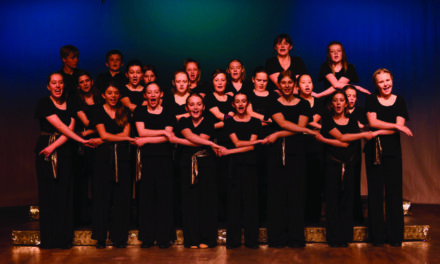