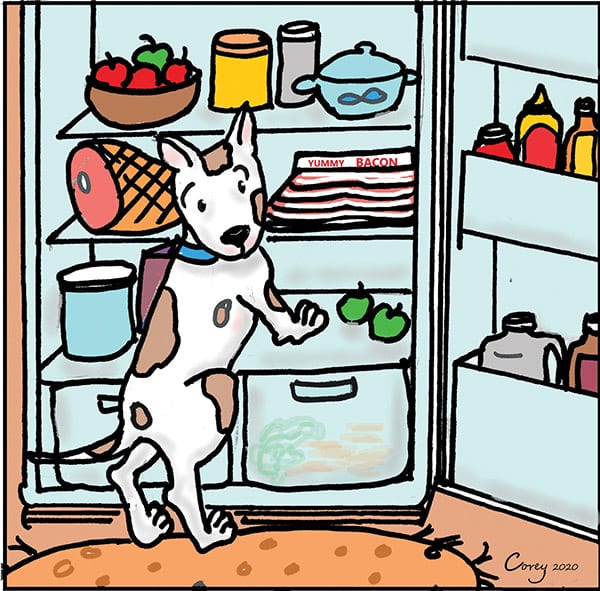 It is no secret that dogs are my favorite animal on the planet. And why wouldn’t they be? We’re talking about man’s best friend here—tireless work dogs, big-hearted service dogs, snuggly lap dogs—there’s a variety for every want and need. To love a dog is to invest in a lifelong friend that happens to be a bottomless pit of entertainment, especially if it performs tricks.

You must have seen some pretty awesome dog tricks that are entertaining in the extreme. Some dogs use their inherent intelligence and cleverness for good tricks, and others for bad ones. For instance, I watched a dog training show some years back that chronicled a very naughty dog’s antics. When the owners would leave, their pet would watch at the window, taking the posture of a loyal dog pining for its owners. In truth, he was just waiting for the car to pull away, and the second it cleared the driveway, he would run to the kitchen, drifting around corners, nails clicking on the floor. He headed directly for the refrigerator, where he would clench in his teeth the towel hanging from the handle. He would pull at just the right angle to open the refrigerator, where an entire pound of packaged bacon was waiting on the shelf. The whole operation took under a minute. With his owners gone, he was free to tear open the package and strip after strip would be consumed until his belly was full of fatty deliciousness. And so sated, he would wander off somewhere to take a long nap. When his people came home, they would discover the torn and empty wrapper and their dog, drunk on bacon, sleeping it off in a patch of sunshine. They hadn’t a clue what was going on until they installed cameras and caught him in the act. They ultimately broke him of this habit by fitting the refrigerator door with an obnoxiously loud alarm. The terrible noise ruined the whole fun for him and gone was that dog’s bad trick.

By contrast, here’s an example of a good trick: Years ago, we had a big Labrador, Markus, that was adorable executing his good trick we called Biscuit Flip and Crunch. It was a crowd-pleaser when our Allison, who was considerably smaller than he, brought him to her kindergarten class for ‘Show and Tell.’ When it was her turn, she stood proudly in the center of the circle of children. She put up her hand and firmly told Markus to “sit.” Sitting, he was taller than she, so she stood on tiptoe to place a big biscuit along the length of his nose. Then, she put up her hand and said, “Stay… stay… ” as she backed away. Of course, it’s darling to watch an itty-bitty girl take command of a big dog. That he was completely in love with her and would hang on her every word was our little secret. When she reached the other side of the circle, she said, “Okay!” which was his cue to flip the biscuit into the air and catch it in his mouth. While he crunched happily, Allison took a bow and basked in the applause. Markus preened and wagged his tail amid all that attention. Such a good trick by a good dog.

One could say that all it takes is training—that if you spend enough time working with a dog, you can achieve anything. I disagree with that statement on face value. What it really takes is a dog that wants to please because it values the relationship. The pocketful of treats can’t hurt either. The person training needs to be motivating, consistent and loving or it will all fall apart. It’s all in the relationship. Many years ago, I saw a man on television with a clutch of dogs performing a stage act. The dogs were large and small, some wearing costumes and some not. He had them performing remarkable feats up ladders and across planks, stacking themselves into pyramids, balancing on balls, and always looking to the trainer for approval. He had tiny treats that he handed out at each trick. The audience was rapt. When the act was over and the trainer sat down to interview, he told the story that each dog had been rescued from a shelter. He worked and worked to gain their trust and then put together this act. Each dog had a backstory, and the trainer was their hero. The dogs now had a pack, a purpose and a secure home with food, shelter and companionship. By going on tour and television, the trainer advocated pet adoption everywhere he went. A good human teaching dogs good tricks for a good purpose.

Some tricks are not taught at all, but simply discovered. Whether they could be classified as ‘good’ is a matter of perspective. For instance, for years we have brought our dogs to work. They usually hang out with me in the office where we have carved out a bed area for them. Our dear departed Mollie had a secret foot fetish. We learned this by accident. It was summertime in Evergreen. From my perspective, I saw the sunny weather marked by the appearance of our customers wearing tank tops and shorts. From Mollie’s perspective in her lair under the desk, it presented as sandals and bare toes. So used to Mollie’s presence, I didn’t think about this being a problem… until it was. Mollie’s surprise trick was discovered one day as I was talking with a female customer at the intake desk, taking down information about her service needs. It was a pleasant exchange up to the moment she suddenly yelped and jumped backward. I was confused and alarmed. “What happened?” I asked. She was pulling up her feet and rubbing her arms. “Something licked me!” she said with a shiver. Sure enough, Mollie had spotted those tempting toes and squirmed closer and closer until she could have a lick. I couldn’t help but to laugh. It was an understandably unwelcome horror for the customer and completely within bounds from Mollie’s perspective. The whole incident was easily sorted out—no hard feelings—and admittedly comical. I’d like to say that Mollie demonstrated her sneaky lick trick only once, but I’d be lying. In truth, I cannot count how many times it happened over the years, and it never got less of a reaction. I never could figure out how to warn people—perhaps post a ‘Beware of Licking’ sign? Nah, it could cause some dangerous confusion, and let’s face it—the element of surprise is so much more fun!

Like I said, what’s not to love about dogs? Who couldn’t love a creature that brings boundless happiness, affection and a surprise lick now and then? Admit it, even the bacon bandit with his naughty trick brought a smile to your face!