Normally, when my turn rolls around for this column, I have an idea for a topic well ahead of time. I only have to write every third month, so really, how hard could it be, right? In fact, often, I’ll wake up on any given morning and the entire essay pops right into my head fully formed. I enjoy sharing my adventures in farming and there’s almost always something funny that I can stretch into enough words to fill some space. Rarely (ok, never) am I at a loss for words. So, you can imagine my surprise at finding myself sitting here on Deadline Day and I’ve got nothin’. Nada. Bupkis. Not. One. Thing.

Given that, and the hope that imitation truly is the grandest form of flattery, I will borrow an idea from my favorite blogger, Stephanie Pearl-McPhee (aka The Yarn Harlot). Periodically, she’ll publish a blog post entitled, “Random Thoughts on a Tuesday,” which is aptly named as it’s both published on a Tuesday and is literally a list of random thoughts with no overarching theme whatsoever. I always thought it was quite clever on her part to write such a list of entertaining or thoughtful little items. Now I’m realizing it’s actually just quite clever on her part to come up with a way of knocking out a column when you really have nothing to go with. So, here we go.

—Interestingly enough, in looking up the correct spelling of the word “Bupkis,” I discovered several fun little tidbits. First, I learned how to correctly spell Bupkis. Second, I learned that it is Yiddish in origin—not a huge surprise there. It’s got that lovely Yiddish ring to it—and the definition is “absolutely nothing; worthless.” But lastly, and here’s the fun part, the etymology is “short for kozebubkes (goat droppings).” And just like that, we’re back on track for farm topics.

—Those of you who know me personally or are friends with me on Facebook are aware that I recently purchased an air fryer/toaster/convection oven combo, and that there may have been an incident. I have been quite enthusiastic about this new gadget and have been air frying about any damned thing you can think of. My favorite so far is the Reuben Egg Roll. The pictures of that recipe are what inspired the actual purchase of the air fryer. Yes, it may seem silly—ok, absurd, actually—to purchase a rather spendy kitchen gadget for the sole purpose of making a sandwich. But lemme tell ya’, this is the freakin’ KING of all sandwiches. So, I was surprised and delighted to discover what all else you could air fry. Turns out, there are options galore and I had been having a blast trying every recipe I could Google. Then came the fateful evening when I was making a recipe that required preheating the air fryer. Rather than relive the horror with a blow-by-blow account, I’ll just recap here what I learned:

Pro Tip 1: If you’re going to preheat your relatively new air fryer toaster oven, you should try and remember to first remove the instruction manuals you stored in there.

Pro Tip 2: Once the aforementioned manuals actually catch fire because you didn’t follow Pro Tip 1, have a fresh snow pile handy right outside the kitchen door. (And it’s pretty impressive just how much smoke that little oven can spew out when you open its door.)

—I tend to write in the same manner in which I speak, which means run-on sentences sprinkled with a blatant disregard for punctuation protocols. The Grammar Police function that is embedded within Microsoft Word has no idea what to make of that. I haven’t decided if the double blue lines that Word tosses into my paragraphs so casually—and frequently—are annoying or just delightful little pops of color on my screen. It could go either way. [Editor’s note: Thankfully, she has me. Ha!]

—I seem to have lost my knitting mojo during this whole Time of Covid. I just haven’t felt like it, which is not like me at all. I have managed to start more projects than I would ever be comfortable admitting to in public, but have not completed a single one in the last year. Business has been brisk enough that I haven’t actually had much in the way of downtime, but it’s more than that and I have no clue what. In the meantime, I’ve started a baby dress for a dear friend’s newborn granddaughter and am now concerned that said child may start kindergarten before I get that sucker done.

—Knitting Startitis. The problem is real. 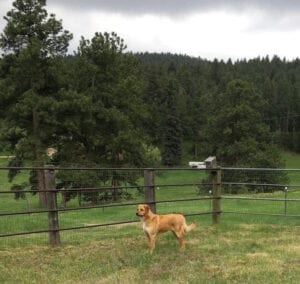 —Let’s talk a little more about that KING of sandwiches. For those of you with a hankering, here are the mods I made: chopped pastrami instead of corned beef; Muenster and Havarti cheeses in lieu of Swiss. Layer cheese, pastrami, sauerkraut and more cheese in the egg roll wrapper. Roll ’em up and bake or fry in the manner of your choosing and serve with homemade Russian dressing. If you’re preheating any appliance at this time, remove all flammable objects first. (See Pro Tip 1 from earlier.)

—Spring training for this year’s shearing consists of squats in the barn while carrying 5-gallon water buckets. They weigh 40 pounds. We don’t need no stinkin’ gym.

—We’ve had a coyote cruising the neighborhood at dusk lately, which is also about the same time that Super Hubby is putting the alpacas and dogs up for the night. (I do morning chores; he does evening chores. It works out quite well and gives us both that barn Zen time that’s good for the soul.) He boots everyone outside while he mucks and puts down food, and the dogs are in charge out there. When the coyote gets within sight (or smell) of the back fence line, it’s fascinating to see the dogs work and how their instincts kick in. While Anatolian Shepherds are livestock guardian dogs, not herding dogs, when there’s a threat, they can move a herd of animals as effectively as any cattle dog out there. And while Moses is far more mass than grace, he will still get them all into a clump near the barn and not let them go back out, whilst Clara charges the fence line like she’s heading into an MMA cage match. The coyote, not being stupid, wisely chooses another route.

—Speaking of Clara Oswald, the Impossible Girl, we’ve always wondered what might be in her makeup besides Anatolian Shepherd. While she’s certainly full of Anatolian traits, both physical and mental, she has a narrow little face that would indicate some other breed or two had a hand in there. (And that little pinhead of hers is what makes her such a good digger… I swear she could go through concrete.) We finally decided to have her DNA tested and it was pretty interesting. Five breeds showed up in her history: 57 percent Anatolian Shepherd Dog, 23 percent Great Pyrenees, 17 percent Bernese Mountain Dog, 2 percent Caucasian Shepherd Dog and 1 percent Saluki. I’m thinking that tiny little 1 percent explains a whole lot.

Apparently, I had enough ‘stream of consciousness’ thoughts here to write up a whole lot of words, but only managed 12 Unrelated Paragraphs. And actually, a few of them managed to be related, so that was a lot of hype for basically 6 unrelated paragraphs and 6 supporting actor paragraphs. So that we don’t go through this again next time, do feel free to contact me with any topic suggestions relating to living here in the foothills, alpacas, adventures in farming, cranky old cats, etc. In the meantime, spring is close and that makes me pretty darn happy.