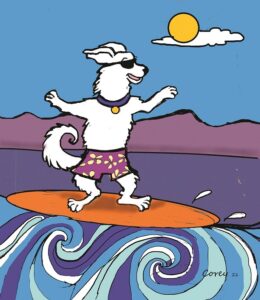 I don’t know about you, but I could be having the worst day, driving down the road with my face drawn into a scowl… and then I spy a dog on a car ride. Sounds ordinary enough, but I’m always struck by how much joy dogs get from a simple outing. And that’s all it takes. My mood immediately shifts to align with that infectiously happy dog.

For every dog that loves a car ride, each puts their own spin on the experience. Some dogs like to bite the air as it goes by. Surely, you’ve seen it. They stand alert and tall on the back seat with their necks stretched so that their heads lean way out. Then they chomp away at the air like it’s their one job and they are committed to doing it right. I’m guessing they think they can take a piece with them. So much effort goes into the activity, yet they never seem disappointed at coming up empty. Sometimes they go from window to window testing to see if the chomping is better. Chomp, chomp, chomp, like munching on a cob of corn. The smiles between the chomps and the wagging tail tells the story.

Others sit their butts down on the seat and raise their noses in the direction of the open window twitching appreciatively as the scents speed past. This is the Economy of Movement style of car ride, involving only a nose twitch. Don’t mistake the calmness as apathy. This dog’s face is still happy.

Some dogs look like furry humans as they sit upright riding shotgun and facing forward like a copilot. These dogs turn to glance in your direction as you pull up next to them. Maybe the ears go up, but other than that, it looks like they are committed to holding a dignified stance and certainly wouldn’t partake in ordinary dog shenanigans. Cracks me up. I call this car ride style The Professor. My vivid imagination wants to place a pipe in its mouth, perch some reading glasses on its snout, and dress it in a cardigan with suede patches to round out the human illusion.

Sometimes, drivers invite the whole squirrely crew along for the ride. You’ve seen this example. I call this car ride style the Bark Wagon because the excitement level is bark worthy. Reminds me of a school bus full of fifth-graders on a field trip to Elitch’s. There are usually three or four dogs inside the car, exchanging seats, jumping on each other and vying for window space. Such a happy scene. Makes me want to pull alongside and howl just for fun. The dogs would launch into a sing-along frenzy, but the driver might not be so joyful.

The dogs that ride in the bed of a truck represent the Surf’s Up style. I say this because they always seem to be balanced precariously on the wheel hubs. It looks like surfing. I cringe every time, seized by fear that the next pothole in the road or sharp turn will expel them from the truck. If you don’t dwell on the consequences, the balance and precision—not to mention the danger factor—is thrilling to watch, in a squeeze-your-eyes-tight kind of way. I once rode behind a little white dog that cruised down the highway in the back of a truck balanced precariously with one paw on the corner edge of the bed up by the cab, then its little body stretched as far as it could to perch its two back legs on the very end of the flat part of the wheel hub. The other front paw was reaching over the side of the truck bed, fishing for a foothold. One slight move or overcorrection and that little white dog would be tumbling out into unknown dangers. I followed him for a few miles and nothing bad happened. I gotta say, that was one skilled truck bed surfer.

Some dogs view a car ride as the chance to bond with their human. I’ve seen many a little lap dog cruising down the road draped across their human’s lap—the human who is driving. Seat pushed back so the steering wheel can turn freely, this driver steers only with his right hand because the dog has the left pinned down to access the window. I call this car ride style Under Your Skin because that is a dog that cannot get close enough to its human. A slight variety is the tiny dog that lies across the driver’s neck making a nest of the space between neck and headrest. It is a confident driver indeed who invites this style of car ride. By my observation, both dogs and drivers seem happy with the arrangement.

There are clues as to whether the owner of a car is a dog lover. You do not have to witness the car cruising down the road with the dog inside to deduce that it is a frequent event. An empty car in a parking lot can tell many a tale. The most obvious clues are nose prints. The wet noses of dogs make a print every time they touch the glass. If the back window only goes down partway, as so many back seat windows are designed to do, the nose prints become marked by a roundish smear of the actual nose, paired with multiple drips. This occurs when the nose comes in contact with the edge of the window, extracting moisture, otherwise known as snot. Sounds gross, but it still brings a smile to my face because the snot on the windows reminds me that this is a car where a dog is happily partaking in frequent car rides. The size of the nose prints gives a clue as to how big a dog rides there. Big dogs often leave jumping-in footprints too as they are unlikely to be carried.

No matter the style of car ride a dog adopts, seeing one out and about with its ears flapping in the wind sporting a wide, tongue-lolling grin will undoubtedly bring a smile to your face every time. Keep a lookout—it’s worth it. 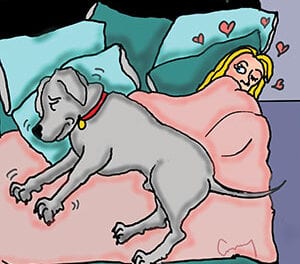 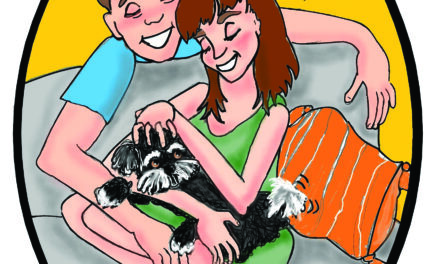