Here’s another internet gem. It had no attribution, but it sure is funny. Or maybe it’s only funny to the editor/grammar nerd in me? And I suppose not everyone will get them all, but I’m sharing it anyway.

—An Oxford comma walks into a bar where it spends the evening watching television, getting drunk, and smoking cigars.

—A dangling participle walks into a bar. Enjoying a cocktail and chatting with the bartender, the evening passes pleasantly.

—A bar was walked into by the passive voice.

—An oxymoron walked into a bar, and the silence was deafening.

—A malapropism walks into a bar, looking for all intensive purposes like a wolf in cheap clothing, muttering epitaphs and casting dispersions on his magnificent other, who takes him for granite.

—Hyperbole totally rips into this insane bar and absolutely destroys everything.

—A question mark walks into a bar?

—A non sequitur walks into a bar. In a strong wind, even turkeys can fly.

—Papyrus and Comic Sans walk into a bar. The bartender says, “Get out—we don’t serve your type.”

—A mixed metaphor walks into a bar, seeing the handwriting on the wall but hoping to nip it in the bud.

—A comma splice walks into a bar, it has a drink and then leaves.

—Three intransitive verbs walk into a bar. They sit. They converse. They depart.

—A synonym strolls into a tavern.

—At the end of the day, a cliché walks into a bar—fresh as a daisy, cute as a button and sharp as a tack.

—A run-on sentence walks into a bar it starts flirting. With a cute little sentence fragment.

—A figure of speech literally walks into a bar and ends up getting figuratively hammered.

—An allusion walks into a bar, despite the fact that alcohol is its Achilles heel.

—The subjunctive would have walked into a bar, had it only known.

—A misplaced modifier walks into a bar owned by a man with a glass eye named Ralph.

—The past, present and future walked into a bar. It was tense.

—A dyslexic walks into a bra.

—A verb walks into a bar, sees a beautiful noun, and suggests they conjugate. The noun declines.

—A simile walks into a bar, as parched as a desert.

—A gerund and an infinitive walk into a bar, drinking to forget.

Holly grew up in Fairfax, VA, and after also living in the coastal areas of Myrtle Beach, SC and Savannah, GA, she realized the mountains were calling. She moved to Colorado 21 years ago and although she misses the beach at times, vacations help to satisfy that. Holly has owned multiple businesses in the last 36 years, mostly in the pet industry, but nothing has been as fulfilling as overseeing things at Colorado Serenity. Holly and publisher Doug got engaged this past December and enjoy working, living and playing together. Reach Holly at holly@coloradoserenity.com 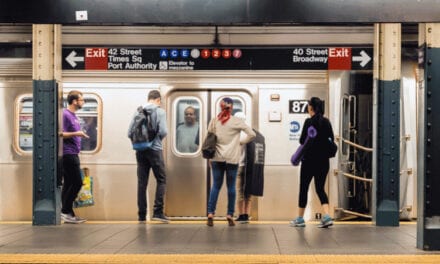