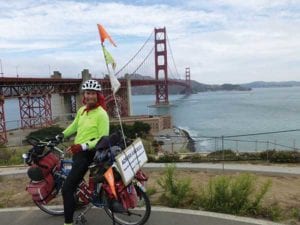 Frosty Wooldridge was born into a life of travel and he embraced the adventure right from the start. “I was a service brat. Dad was in the Marine Corps,” he said. “It was a great life. I got to see the world.”

He was born on Great Lakes Naval Air Station north of Chicago and soon moved to Parris Island, South Carolina. By the time he was 18, he had lived in 45 states and Germany. He graduated from Michigan State with a degree in journalism and later from Grand Valley State University with a degree in English and a teaching certificate. In 1971, he came to Steamboat to ski with two of his brothers. “We had an amazing powder week. I thought, oh my God, I’m home!”

He moved to Boulder, where he lived for 20 years, and took a teaching job in Brighton. Teaching didn’t pay very well, but he had three months off to travel every summer.

In 1974, he went to Alaska on a motorcycle and met two guys on bicycles in the Arctic Circle. He was curious about their experience and when he asked, “They said, ‘All you do is twist the throttle and watch scenery go by. On a bicycle, you live on the edge of wonder.’ That played on my brain for days.” While in Alaska, he saw many wonders, including grizzlies and glaciers, but he couldn’t get that phrase, on the edge of wonder, out of his mind. He went home and decided to bike across the country that same year. “I stuck a back tire in the Pacific Ocean and went all the way to the coast of Georgia,” he said.

He left teaching after five years for a much better paying job as a long haul trucker. In a month, he earned what he made in a year as a teacher. “It gave me a free pass around the world.”

He spent a year biking in South America, and later, he traveled by bike in Asia and Australia. He rode through Alaska to the Arctic Ocean and through every U.S. state and Canadian Province. He even biked and camped in Antarctica.

In between all that travel, he taught creative writing and environmental science. He has published 14 books and written hundreds of articles for national and international magazines as well as guest editorials in several newspapers. He has also guest lectured at a number of colleges and universities. His writing and talks capture his spirit and his unique view of the world and other cultures that is largely informed by his experience bicycling 100,000 miles around the globe.

One of his presentations, “How to Live a Life of Adventure; Designing Life on Your Own Terms,” he feels is especially relevant for high school kids. “What I like to do is inspire. Most people stumble out of high school. Life takes them up and they fall into a job. Wouldn’t it be great if they discovered what they want to do before they graduate?” he said.

“I read “Jonathan Livingston Seagull.” ‘The perfect speed, my son, is being there.’ I brought that philosophy into my life. The perfect speed is to be out there in life,” he said. His book, “Living Your Spectacular Life,” incorporates those principles and tells the stories of 20 people who jumped off the grid and started their own lives. “I like to share that inspiration with kids and adults and help them have a happy creative life.”

Frosty has definitely been “out there in life.” He has seen amazing things and met amazing people simply by being in the right place at the right time.

In 1984, while biking on his own, he crossed into New Mexico. He saw what he thought at first was a man walking his dog, but as he got closer, he realized it was two men. One, a man named Bob Wieland, was walking on his hands because he had lost his legs to a mortar mine while serving as a medic in Vietnam. He told Frosty he was walking across the country to show people what war does. “I cried my eyes out. Later, I heard that he completed the walk in three years, eight months and six days.”

Frosty and his wife, Sandi, were on a bike trip east of Joshua Tree National Monument in Southern California. They stopped to set up camp as the sun was setting. Frosty noticed a hawk hovering above and walked off to get a better look. He witnessed the hawk repeatedly diving down to toy with a rattlesnake that it apparently wanted for dinner. The hawk dove down daring the snake to strike. The rattlesnake lunged and recoiled. After about 10 minutes, the snake grew tired and succumbed to the hawk’s attack. “Moments later, the great hawk flapped his mighty wings with the snake securely gripped in his talons,” Frosty wrote in an essay. “Sometimes, I cannot help but thank the Bicycle Gods for their gifts to me as I travel around this planet on Condor, my iron steed.”

In another story, Frosty recounts witnessing a grizzly take down an elk in Yellowstone. And in a third, he describes a different type of emotional experience he and his cycling companion had, when, purely by chance, they encountered an Italian children’s choir practicing in a church in an ancient walled city in Tuscany. He wrote, “For the next 30 minutes, we sat in sublime joy with Italian songs floating through the air. We couldn’t understand the language, yet our hearts and spirits felt their beauty.”

At 73, Frosty shows little sign of slowing down. “Thirty summers, nine months off a year, three two-year vacations. It’s been a wild ride.”