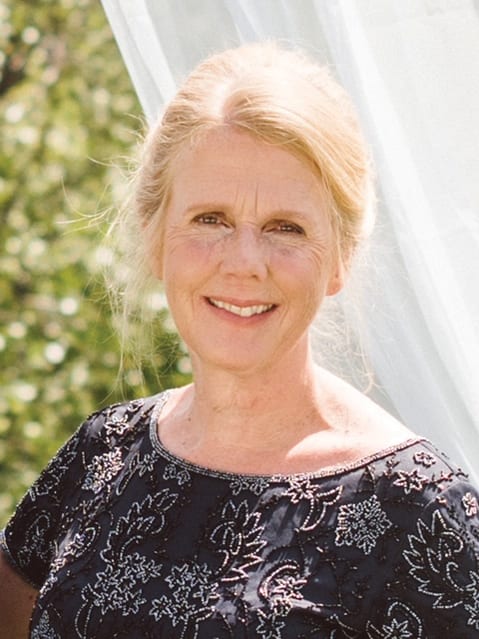 When she was 3 years old, Victoria was diagnosed with hydrocephalus (cerebral fluid pooling on the brain). Doctors implanted a shunt that malfunctioned. The technology at the time relied on valves that failed due to clogging. Her father had an idea for a solution and worked with a neurosurgeon to develop a valve that did not clog or break. That invention was the start of Denver Biomaterials Inc. and the device became known as the Denver Shunt®. It saved tens of thousands of children, including Victoria.

“As the family lore goes, the condition is the reason I developed a stutter. Years and years of speech therapy techniques help me, if I remember to use them,” she said.

Her family moved to Evergreen in 1971. She graduated from DU in 1986 with a degree in elementary education and child development. She married Chris Lierheimer and taught in Jeffco briefly before she and Chris moved to Albany, New York for a short time. They returned to Evergreen in 1989 and a few years later started a preschool, Our House Children’s Learning Center in Marshdale.

“In 1996, we surveyed the educational landscape in Evergreen and felt it was the right time to start a high-quality, classical, non-denominational Christian School,” she explained. Our House grew into Evergreen Academy with the addition of a K-8 program.

The school flourished until 2008. “The bottom fell out of the economy and my husband was diagnosed with terminal cancer. Those two things made it very difficult for the K-8 portion to continue because Chris was the headmaster,” Victoria said. “He was very capable and well-loved. Colon cancer is a terrible thing. It took him very fast—20 months from diagnosis to the time he passed.”

Victoria’s area of interest and professional expertise is children from birth to age 8. “I lost interest in K-8 when Chris died,” she said. She collapsed Evergreen Academy back to a full-day, year-round preschool and added the Super Kids program for kids up to age 9 during school breaks. Super Kids is a mix of academic practice and special themes related to Colorado, such as trains, history and art. She and her siblings sold the Marshdale property when their father moved into a nursing home and the preschool relocated to its new home in the Evergreen Lutheran Church on Meadow Drive.

“Evergreen Academy has a team of really good people. I am in more of an executive director role now. I go in three days a week. It is a darling, thriving little preschool. A real community asset,” she said. “God has been really good to me. All of that took place amidst a lot of heartbreak.” By that time, her four kids all went off to college and she became an empty nester.

When the K-8 part of Evergreen Academy was first getting started, she became frustrated with the local real estate picture. “The town was too expensive for the young teachers to live in. I started to investigate a way to solve that problem, or at least make a dent in it,” she said.

Victoria did some “hard research” and acquired a few entry level properties for the purpose of housing Evergreen Academy staff. The start of her real estate development company, Opportunity Properties, was a couple of duplexes in Kittredge and some smaller properties in Evergreen. Several years after Chris passed away, she connected with a man who had significant residential real estate experience. “We worked on some entry level real estate projects in the towns where my kids went to school.”

The idea that even entry level properties in Colorado are out of reach for millennials is not okay with her. “That is a problem I can try to make a dent in,” she said. She and her partner are developing an old Catholic girls school compound in Canon City. “It’s a pretty popular area among that age demographic. We are developing the 8-acre parcel, converting the dormitory and the classroom building into entry-level condos that sell for $100K each, which is easily within the reach of a person just starting out.”

Addressing this issue gives her a lot of professional satisfaction as well as a lot of joy. “Entry level real estate development is really important to me now, as much as family building was in the ’80s, ’90s and 2000s. That drove me to put all my effort into the Evergreen Academy. What is fun is that I have a handful of kids who went to our school who are bringing me their kids. Too much fun. It’s important to me to know I’m helping those kids make some financial progress,” Victoria said.

Like many Colorado children, Victoria grew up skiing and so did her kids. “Chris and I thought if we could get them 10 years of ski school, he and I would be poor but we’d have an awesome group of powder hounds. That’s exactly what happened,” she said. “It’s a rip, getting together with these kids when they get together to ski all over the mountain.”

Two of her daughters trained to teach skiing to preschoolers at Vail. They were having so much fun, they encouraged Victoria to join them. “If your kids ask you to join them to do a positive thing outdoors, well sure! I did the training too and taught with the girls for three years. The oldest got a data engineer job that took over her life. My other daughter and I still teach up there. It’s a blast.”

Victoria fondly remembers her life here. “Evergreen was, and still is, a great place to raise a family. I have great memories of driving in the family station wagon up North Turkey Creek when it was still a dirt road. The only place to get food was SuperFoods in downtown Evergreen. It was such a big deal to get Safeway in North Evergreen. I have nice memories of attending Wilmot Elementary and graduating from Evergreen High School in 1982,” she said.