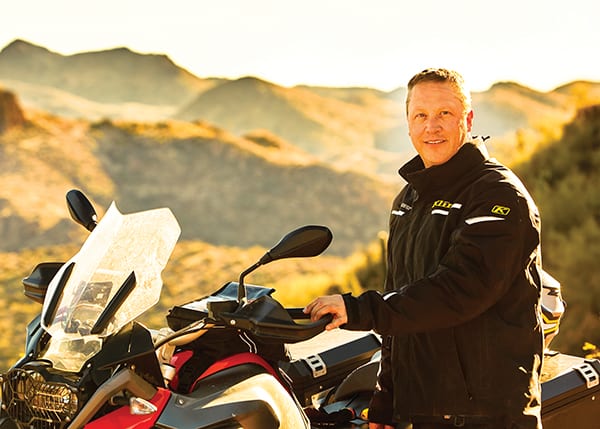 “His counselor explained that Tom had many of the symptoms of PTSD even though he couldn’t pinpoint a single triggering event.”

Tom Larson and his wife, Dana, grew up in Minnesota, but having spent time in Colorado over the years, they couldn’t resist settling here when they got the chance. Three days after their wedding in 1987, they packed up all their possessions and with $800 in wedding cash, moved to Denver with no jobs and no real idea of what was next.

Tom got a job as an ad copywriter in downtown Denver. After years of working at three different ad agencies, he knew he wanted to do something more meaningful with his life.

In 1997, he and Dana moved to the Dominican Republic for a year to work in a poor community. That experience led to them founding Healing Waters International, a nonprofit organization based in Golden which brings clean water to communities that wouldn’t have it otherwise. “It grew quickly. In six years we went from zero to 30 employees in four countries,” Tom said. “It was really rewarding, but a point came where I realized it had outgrown my skill set and it was time to move on.”

That decision did not come easily. “People were always patting me on the back for doing this noble work and it became my identity,” Tom said. “It was our baby. We had invested everything in it and it was difficult to leave it in the hands of someone who had a different vision.”

Tom sank into depression after that, unsure of his identity once he was no longer running the nonprofit. He began working with a counselor to help him with the depression but also help him discern what to do next. He needed to find a new direction in life.

The counselor suggested EMDR, a treatment for people who have post traumatic stress disorder (PTSD). Tom was surprised by the suggestion. His counselor explained that Tom had many of the symptoms of PTSD even though he couldn’t pinpoint a single triggering event. He described Tom’s experience as “death by a thousand paper cuts.”

“It might not be the same as being in combat, getting hit by an IED or watching your best friend die,” Tom explained, “but the trauma is still real. It doesn’t matter what the trauma was or where it came from. What matters is how it affects you and keeps you from living the healthy and happy life you want to live.”

While at one of his daughter’s volleyball games in Conifer, Tom noticed his other daughter’s coach, an Iraq war veteran, in the stands with a service dog. “I naively said, ‘What’s with the dog? Are you training it?’ He said, ‘No, it’s my PTSD dog.’ He told me how it helped him and alerted him to signs of anxiety or distress.”

That prompted Tom to start reading about veterans and PTSD. “I thought, if it’s been as hard for me to move on—with an identity crisis, depression, not knowing what to do next—what’s it like for people who leave the military and have to find their place in the civilian world? Their skills and training don’t always translate into post-military life. Then throw PTSD and other mental health issues into the mix. I knew how debilitating it was for me, and figured it must be even more difficult for them.”

While reading a motorcycle magazine in the dentist’s office, Tom got an idea. “I saw pictures of guys riding adventure bikes in the woods and thought, what if we could use motorcycles as the draw, ride during the day and have workshops at night to provide tools to help them with their issues?” And that’s what he did.

Tom founded Motorcycle Relief Project (MRP) in 2014 to help those who served in the military, but he quickly discovered that many veterans also work as first responders and have trauma that comes from the things they experience on the job. As a result, he expanded the program to include first responders.

Participants accepted into the program experience a 5-day “Relief Ride” that includes daily motorcycle rides through majestic scenery in Colorado or Arizona, followed by a family-style dinner and an evening workshop. The program is designed to honor and encourage the participants and give them ways to decompress, connect with others who have had similar experiences and gain tools to deal with their issues.

The goal of the rides is to get out in nature, hang out, and enjoy each other’s company. The rides are a combination of pavement and dirt. A professional dirt instructor is on hand for the week to teach those who have never ridden off-pavement the skills they need to do it safely. Back at the lodge over dinner, everyone shares conversation about the day’s experience and they all get to know one another. After dinner, the group convenes for the nightly workshop—the most important part of the program.

In a video on the website, Tom explains that in the evening workshops, participants learn “how to do battle with their own inner demons, how to not be so stressed and angry all the time, and really how to try to get back to the person we used to be and that we know we still are inside somehow.”

MRP provides a safe space for people to relax and not have to pretend that everything is okay. There is no judgment and no “fixing.” The intent is for everyone to leave at the end of the week with hope that they can go home and tackle whatever challenges they are facing. Two Evergreen/Conifer psychologists, Meg Kimball-Hodges and Sherod Miller, are on the board of directors and provide valuable input and direction for the program.

The size of each MRP Relief Ride is limited to keep the group manageable for riding together. There are Relief Rides for men and women. To date, 308 veterans and first responders have gone through the program. The 45th Relief Ride takes place this month.

The work Tom does as president and founder of MRP is immensely rewarding and has helped him in many areas of his own life as well. For more information on how to participate or donate, visit motorelief.org.