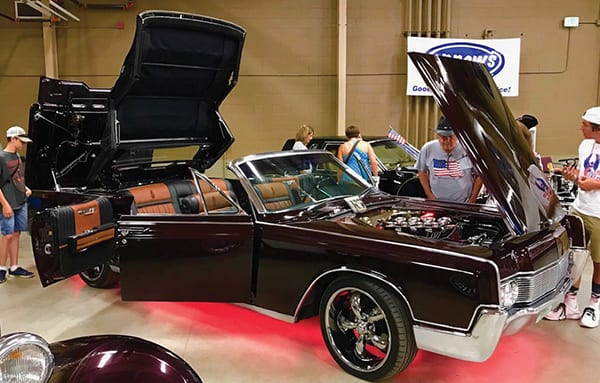 Ron Rossetter grew up in upstate New York and left as soon as he could. He traveled the country in his Chevy truck for a year and a half, working in gas stations when he needed money. He said he accidentally ended up in Colorado when his truck broke down. He could have gotten it fixed and kept going, but he looked around, liked what he saw and decided to stay.

He had come across I-70 from Utah and, like many of us, found Colorado to be beautiful. He settled in Evergreen in 1978 at the age of 20, in Echo Hills at a time when hardly anybody lived up there, he said. Forty-plus years later, he still lives in that same house.

Initially, he worked for the railroad for a time. When he got laid off, he started Coverall Repairs, doing everything from plumbing, electrical and heating to chasing animals out of attics. He also started snow plowing commercial properties in the winter, and he still does both.

“I’m a workaholic. I’ve taken care of this community a long time. Broken pipes. Heating systems. If you needed something done, I got it done. It’s old-school work—say what you do and do what you say,” he said. “I’ve been in pretty much every house in this town. Everyone waves to me.”

In 1999, he bought Evergreen Glass thinking it would replace his other businesses, but people kept calling him for help, so he was never able to give those up. His wife, Breeze, and son, Forest Shade, successfully run Evergreen Glass, which has an exceptional local following and also does a lot of work throughout the mountains and metro Denver. Ron explained that they do a lot of custom, creative work such as glass backsplashes. “We’re the only ones who do that west of the Mississippi.” His son, Lakota Sage, has a T-shirt business in Evergreen.

Much of the painted glasswork that Evergreen Glass has become known for is inspired by Ron’s work on cars. He uses a lot of the bold, metallic car colors to create unique pieces, some that have been called “living art” because they change color as you walk past. Glass offers unlimited options that allow customers to create whatever colors and patterns their imaginations conceive. The showroom looks like an art gallery and is worth a peek if you need some inspiration for a kitchen, bath or bar remodel.

In his spare time, Ron builds show cars and loves to take them to car shows. Breeze buys him a car to work on every 10 years, “mainly to keep me in the garage,” Ron joked. He has a ’53 ’03 Corvette, which is a 2003 with all the modern technology modeled off of a 1953 Corvette.

The car that gets the most attention is an Excalibur Roadster, similar to a Duesenberg. “It looks like Cruella de Vil’s car or like a car from ‘The Great Gatsby,’” he said. The Excalibur wins awards, especially, he said, when there is a women’s choice category.

His most challenging car has been a Lincoln Continental, Breeze’s gift for his 60th birthday. “It’s legendary, one-of-a-kind,” he said, and he hated it. “I’m a muscle car guy. This is a boat. It’s the size of a battleship. In my wildest dreams I couldn’t imagine what I would do to like it. Nobody messes with Lincolns.” But he did. He turned it into a hot rod and it has been very popular. “It hasn’t lost a show,” he said. One of the top prizes he won for the Lincoln was a ’67 Cadillac limousine.

When COVID-19 hit, Ron got together with a couple of other car enthusiasts, including Monty Porter from Olde’s Garage, to create something fun to help everyone’s mental health. They organized a car show every Saturday from May to September at Olde’s. The first week, there were five cars, the following week, 15 and the number kept growing as people jumped at the chance to show their own cars while everything was in lockdown. “By July 4, we had 100 cars—all through word of mouth—and 60 to 100 cars every weekend after that. All I had to do was park my cars in front of the gas station and it drew them in like flies. It was a great thing.”

Ron explained how much he enjoys showing his cars. Sharing that passion with the community made him and everyone who came happy during a difficult time. “It didn’t cost anything, and I miss doing it,” he added.