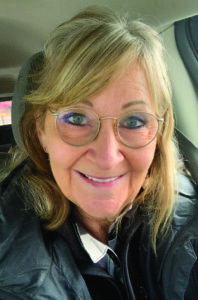 “I was born Mary Katherine Walker, named after my dad’s mother, Mary, and my mom’s mother, Katherine. I instantly became Mary Kay,” Kayte Walker explained. She was Mary in high school and Kayte in nursing school. She became Kayte Christopher-Bear when she got married in 2000 and Mary Kayte Walker when they divorced 10 years later. She’s Kayte Christopher-Walker on Facebook. Some people affectionately call her MK, others call her Mary or Mary Kay, but mostly she goes by Kayte.

Kayte was born in Mercy Hospital in downtown Denver and lived in Westminster until her parents divorced when she was 6 years old. Her father moved to Colorado Springs to pursue cowboy life on a ranch. Her mother remarried and moved the family to southeast Denver when Kayte was in third grade.

“I had the best of both worlds,” she said. City life primarily with her mom, and country life—barrel racing and calf roping—on the ranch with her dad. “I have much gratitude for how easy the divorce was on us. My parents maintained stability and we all got along. It was a pretty positive thing in my life.”

Her family moved again when she was in high school. She graduated from Arvada West in 1976, but walked with her friends at her old school, Thomas Jefferson. Kayte went to Western State College in Gunnison. “I majored in psychology. And skiing,” she joked.

After two years, she left school and interviewed for a job as a dispatcher in Gunnison. When asked if she had any questions, she asked, “What’s a dispatcher?” She did get the job and stayed for just a year and half but it had a big influence on her life later on.

She fell in love with a sheriff’s deputy in Gunnison and she fell in love with nursing while working part-time as a nursing assistant. She particularly enjoyed caring for aging patients, and decided to go to nursing school at Mesa State. She lived in Grand Junction during the week and went home on the weekends. After two years, she got pregnant. The relationship was already struggling with Kayte being away so much. The couple drifted apart and she decided to raise their son, Daniel, on her own.

Kayte moved back to Denver and transferred to CU Denver nursing school, with the hope that she could put off starting for a year or two to be with her baby. Enrollment was by lottery and she drew a very low number which meant starting right away. Since she couldn’t do that, she gave up school.

She got her second dispatching job with the Lakewood Fire Department and was communications supervisor for eight years. A serious five-year relationship ended and it was a hard breakup. Daniel’s father was living in San Diego and suggested they move out there. “It seemed like the right thing to do at the time,” she said. She got a dispatcher job in a big communications department in East County, San Diego.

“Then my brother, Christopher, got sick. He had been diagnosed with AIDS and his health took a turn in 1990-91. I kind of panicked,” she said. She moved back to Denver and commuted to Evergreen for a job with Evergreen Fire Department. Then she took a job as a dispatcher for the Denver Police Department. After two years, she moved to the paramedic division and eventually to fire and ambulance dispatch. Around that time, her brother died.

She worked for Denver Health for the next 13 years. For two of those years she had the opportunity to work on the ambulance. “I was the only one given that opportunity. I took a pay cut to do it.” She held EMT-IV and CPR instructor certification for over 20 years. Little did she know when she first asked what a dispatcher is, that it would be her career for 26 years.

She remarried and she and her husband bought a house in Conifer. She was commuting back to Denver. When the drive got to be too much, Kayte left her career as a dispatcher and took a job with the Canyon Courier doing the legal notices and later was in charge of the classifieds. She worked in that position for eight years and returned a few years later as an outside salesperson.

During that time, she got divorced again and moved to an apartment on the creek in Kittredge. “My creek has provided the most contemplative, meditative, peaceful and beautiful setting for my healing journey from divorce 10 years ago. My plan was to be here one year. I have been unable to separate from the creek. I just signed my tenth lease. This place would transform even more into a little piece of Heaven if it were mine forever,” Kayte said.

Kayte is somewhat famous for her “stair garden.” Every summer she grows tomatoes and some assorted peppers for some “kickass salsa,” and red geraniums in clay pots in memory of Christopher (a tradition she started 25 years ago). She also grows hibiscus and gardenia indoors.

Kayte officiates weddings. She’s starting a business crocheting ponchos and afghans. She’s passionate about music and hasn’t missed a Tedeschi Trucks concert in 10 years. She has plans to write a screenplay and sell it for big bucks. She spends time with her mom and even takes shifts at the care facility where she lives, rekindling her passion for nursing. She loves hanging out with her three grandchildren and her cat, U.

Kayte has had big dreams, been thrown off course a few times, and has had to adjust. She credits her parents, stepparents, Christopher and a few career mentors for her early and strong sense of self worth. Part mountain hippie/rocker chick, part cowgirl, part city girl—at 63, newly retired, she is reinventing herself yet again.