If you are a connoisseur of Evergreen’s local music scene, you no doubt know John Turner—aka Johnny T. He has been a popular performer at various festivals, open mic nights and other area venues such as Aspen Peak Cellars (Bailey), Lariat Lodge (Evergreen) and The Well at Bradford Junction (Conifer) for many years. His solo acoustic act features him on guitar and vocals performing a broad range of musical genres. He likes to play to his audience and that most often means songs from the Eagles, America, Neil Young and others from the ’70s and ’80s. But, if the crowd skews a bit younger, he’ll likely include songs from artists like John Mayer.

He started playing music when he was 15, but never played in public until he came to Evergreen in 2000. He started doing open mics at the Ice House (now Muddy Buck). Joe Bye, another local favorite, asked him to play bass in his band. One of Joe’s guitar players invited him to join the 3eatles [a Beatles cover band], whom he also performs with.

Johnny grew up in southern California. He followed his high school sweetheart to Florida and then they moved to Denver where Johnny’s mother lived. The relationship didn’t last, but he fell in love with Colorado. He eventually got married, and when that relationship ended in divorce, he was pretty depressed. “Everything about Colorado was my life with my wife,” he said. He didn’t think he could stay here and planned to move back to California. He took a drive up to Evergreen. “I was up at the lake, having lunch and a couple of beers. Looking at the beauty of Evergreen Lake, I thought, ‘How can I leave here?’ I moved to Evergreen instead of California.”

For years, Johnny’s day job involved working with his hands, building and repairing things. He worked for Honeywell building parts and learning manufacturing processes, which included building big reel-to-reel tape recorders. When that facility closed, a friend asked if he would like to be an industrial maintenance tech and he took a job with Boulder Technologies. “I went in at entry level with no degree. I just learned on the job about electricity and mechanics. There is a lot in a manufacturing plant that people don’t realize.”

After that, for 18 years he worked the graveyard shift at Wells Fargo repairing printers, cash-counting machines and check-sorting machines. New technologies evolved, however, and the demand for those machines—and his services—declined. “The whole banking industry has changed in the last 10 years. Everyone banks online. No one writes checks anymore. People get paid with direct deposit and pay bills with online bill pay.” He got laid off just prior to the start of the COVID-19 pandemic. 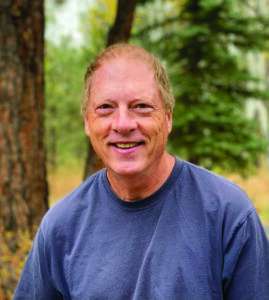 To bring in income, he launched Evergreen Home Services, LLC. He specializes in painting, drywall repair, light plumbing, electrical and construction (nothing that requires a license). He can install ceiling fans and light fixtures; replace toilets, sinks and faucets; build fences and patch bird holes in siding. “I’m pretty busy,” he said. “I’ll do just about anything I think I can do.”

He also puts his skills to use helping his sister who runs a home for the mentally disabled in California, a few hours from where they grew up. Several times a year, he takes a working vacation to paint, clean gutters, and do other maintenance tasks. “There are lots of state regulations and everything has to be up to snuff.” Their younger brother has Down Syndrome and lives there as well.

Johnny also volunteers in his neighborhood, Buffalo Park Estates, in support of the CWPIP (Community Wildfire Protection and Implementation Plan). The team, which he helped organize, provides chipping services and advises homeowners about grant opportunities for fire mitigation that are available from the federal government. The program, organized through the Evergreen Fire Department, operates in several neighborhoods throughout the foothills. Occasionally, they hold hot dog cookouts for the neighborhood. “People can stop by and get familiar with what we do and what we offer,” he said.

In addition to playing music around town, Johnny occasionally performs at weddings. He’s played weddings in Fort Collins, Denver and even in other states, but mainly he sticks to local venues in the foothills. You can catch his solo acoustic act next at Aspen Peak Cellars on October 30.