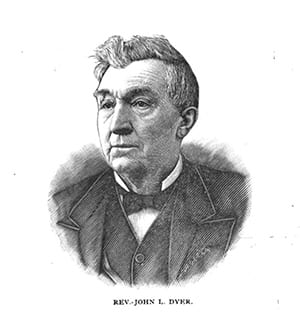 Although not yet six years old, the boy was given the task of doling out the quart of whisky and bucket of water that, at the time in Ohio, was traditional when neighbors came to help with the harvest. Unfortunately, despite a staunchly Methodist lineage, the boy was born with a love of whisky, or so he later said. He thought mixing it with water would save him from detection and went ahead and drank his fill; he had to be carried back to the house. It was, he said, his first and last “drunk,” and much later, took a temperance pledge. Living on a farm, where work was hard and never-ending, as soon as he could reach the handles of a plow, he was set to work, often before sunrise. So began the long, hard life of John Lewis Dyer, born on March 16, 1812.

Dyer officially joined the Methodist church when he was 18 years old, and a year later, the family moved west to Illinois. By the end of 1833, Dyer had married and his own family quickly grew to include three boys and two girls. They moved to Wisconsin where he worked in the lead mines and did some prospecting. Unfortunately, in 1847, his wife and youngest daughter died and he was left with sons and an only daughter. He married again, only to later discover the woman had never divorced her first husband. This was a situation of great embarrassment to him as a God-fearing Christian. Later, after he divorced the woman, she drowned in a flood, possibly a suicide. Dyer was disillusioned and bereft.

Heeding the call to the Church, John Dyer resolved to become a circuit preacher and was ordained in 1855. His circuits covered large parts of Wisconsin and Minnesota where the weather in winter was severe. It was here that he learned from Norwegian immigrants how to fashion skis that he called his “snowshoes.” His daughter married and moved to Denver where his second son, Elias, had also moved around 1860. After a decade of circuit riding and suffering from partial blindness due to an eye complaint, he resolved he would see Pike’s Peak and join his son before he became blind. Leaving his remaining children in the care of his sister, he rode 50 miles a day as far as Omaha, where he was obliged to sell his horse for a gun, watch and 15 dollars. At the age of 49, joining a wagon train, he walked the remaining 540 miles to Denver.

Dyer’s sight improved, but he was still anxious to see the mountains, and swapping the watch for food, and with a buffalo skin and quilt from his son as bedding, he joined a group with a wagon who hauled his meager belongings. Breasting the top of Kenosha Pass in early July 1861, he was astonished at the sweeping vision of South Park, as we can still be today: “grandeur never to be forgotten… a very Eden Park.” He walked with them the 90 miles to Buckskin Joe. At the time, the bustling mining town was the county seat and the location of the Phillips Lode, one of the larger gold strikes in the area, a couple of miles from where Alma is today in Park County. The whole trip from Minnesota cost him $27, which was fortunate as he was virtually destitute. By the following week, he had “given (his) hand and name to the (Methodist) Church.”

In the weeks that followed, he lived in a shelter made from pine poles and boughs, worked a little, and preached wherever he could to miners and others from California Gulch (now Leadville) to Fairplay. The Methodist presiding elder had left for the civil war, so Dyer formed his circuit on his own resources, such as they were. In four months, he walked 500 miles over Indian trails carrying a 37-pound pack, preaching evenings and Sundays and working where he could during the week to earn money. The Church paid him $43.

Over the next 20 years, Dyer would preach on behalf of the Church during the heyday of mining in the whole area. He was sent all over the mountains, summer and winter, throughout South Park and even down into New Mexico, receiving little and often using his own earnings to support the cause. At one point, he took a job as a mail carrier to help out, hauling mail and gold dust from Leadville to Buckskin Joe and back, across the 13,000-foot Mosquito Pass in the dead of winter, using his “snowshoes” and sometimes wading through waist-deep snow. He survived many perilous journeys through winter storms, in some cases arriving more dead than alive, but he never lost his faith.

John Dyer abhorred dancing and theater in addition to his temperance stance; nevertheless, he was often obliged to preach in saloons and dance halls as the only places under cover in poor weather, and also the places he would often find his flock. Given his unique position as a preacher and his perambulations throughout the area, Dyer would have been familiar with many of the personalities of the time, as well as having a hand in some of the more notable events. All the more surprising, therefore, that in his detailed autobiography, he does not mention the smallpox epidemic of 1861-62 in Buckskin Joe that engendered a Western legend and ghost story.

Another new arrival at Buckskin Joe in 1861 gave rise to a very different story, and it is almost certain Dyer would have known of the person, just as he knew millionaire-to-be Horace Tabor, who also arrived that year as postmaster and operated the mercantile store. One day, a woman, clad in a long black dress and veil, stepped from the Denver stage and went immediately to Buck’s Saloon where she obtained a job as a dancer. She was said to have a most angelic face and quickly became a favorite of the rough and ready clientele who came from miles around to see her dance in her trademark silver slippers. No one knew her name or where she had come from, and the miners christened her Silverheels.