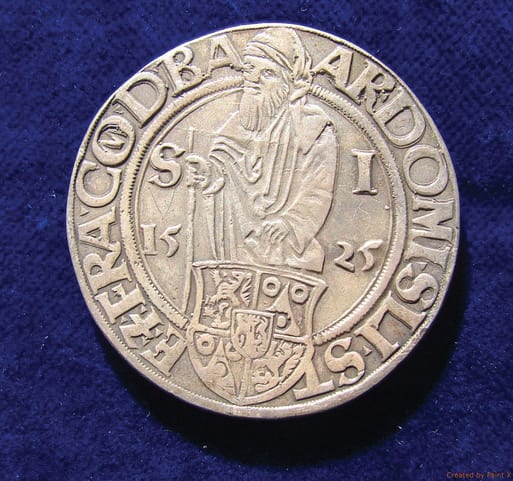 The local name for the mountains is the Krusné hory Mountains—Ore Mountains in English; they lie on the border of present-day Germany and the Czech Republic. In the 12th and 13th centuries, they were a harsh land, much forested and subject to long, cold winters, making it unsuitable for farming. However, small mines in various places had yielded tin, iron and copper, and there had been some finds of silver in the area of a tiny village called Konradsgrün, but all the mines were abandoned as funds ran out.

By the end of the 13th century, the local Schlik family had gained prominence in the area and, a century later still, they owned extensive lands. In 1516, Stefan Schlick founded a mining group to explore one failed silver mine in the village itself. After driving the unsuccessful previous adit not much more than a further 6 feet, they struck it rich. Schlick’s find ignited silver fever in the district and in 1517, he renamed the area “Thal des heiligen Joachims”—in Old German (valley of the Saint Joachim). The village became simply Joachimsthal; in Czech, within whose border it now lies, it is Jáchymov.

Other mines quickly opened up and more rich veins of silver were found. In the period up to 1577, mines in the area yielded net profits of 30 percent despite the rudimentary means of extraction being used. The population of Jáchymov exploded and it became second in size only to Prague in the whole Bohemia-Saxony region.

In 1519, Schlik and his brothers, elevated now to the aristocracy as the Counts of Schlik, began minting coins, likely in the cellars beneath the new castle at Freudenstein. They based the right to do so on a casual but fortuitous mention of minting coin in a decree issued to Mathias Schlik in 1489 by the then King Wladislow. The successful introduction of Schlik’s silver coins was facilitated by what amounted to a gap in the market. Gold coins were in too short of supply to cope with the burgeoning need for large-scale and long-distance business, and the sparse supply of the pre-existing, lower-value silver coins made it difficult to match the values of the gold coinage needed. Volume of supply was not a problem for the Jáchymov mines. During the years 1519 to 1528, the Schlik family exported 2.2 million coins to Leipzig, the major trading center of Saxony. They were named simply after the place they were mined—“thal” (valley). The silver reserves around Jáchymov and the consistent flow of ore from the many mines helped to establish the thal as a stable currency that, with its imitators, spread throughout Europe and far beyond.

It was too good to last. The Schlik’s fiscal monopoly, which amounted to printing money, continued only until 1528, when King Ferdinand I took back the minting rights, and in 1547, he confiscated the whole Jáchymov property. Clearly, it was all too profitable for him to ignore any longer, or perhaps the Schliks just became too powerful.

During the silver boom years, Jáchymov became a large and important cultural center and artists and scientists brought the influence of the Renaissance and humanism to the town, but it was not to last. The decline of Jáchymov was as fast as its growth; the population shrank from a peak of 18,000 in 1534 to 4,000 in 1574 and just 2,177 in 1601. By the middle-years of the 16th century, mining was beginning a decline that accelerated as the richer veins were exhausted. Unfavorable politics and economic conditions wrought a minor war and a return to Catholicism caused an exodus of skilled Protestant workers. Upwards of 15,000 miners had been employed in 900 mines, but in 1613, only 70 miners were still working.

While all this was happening, however, dealings in the thal had spread beyond Europe’s borders to the New World. In 1625, the Dutch established a small trading post on the tip of Manhattan Island, and four decades later, New Amsterdam, as they called it, was the capital of New Netherland, a vast area of the Northeast U.S. They brought with them coin for trade and likewise names for those coins, like “daalder” and “daler” in Flemish, and the “taler,” “thaler” and “thal” in German, a shortening of “Joachimsthaler.” Most coins were probably “leeuwendaalders,” minted in the Netherlands, a coin lighter than the original thal with less silver, but nevertheless a direct descendant of the Joachimsthaler.

In 1664, Charles II of England granted Manhattan Island to his brother, the Duke of York. The only problem with that was the fact that he didn’t actually own it, but this was something the Duke could easily remedy. York sent a trusted subordinate, a few hundred soldiers and three or four gunboats to New Amsterdam, and the surrender of the settlement was achieved without a shot being fired. Amicable arrangements were made with the inhabitants, including the Dutch governor, Pieter Stuyvesant, as the English took over. Stuyvesant retired to his farm called “Bowerij” (the present day Bowery) and the settlement was renamed New York City. As the English language took over, the common Dutch “daler” was Anglicized to “dollar.” Perhaps it’s strange that the etymological origins of the dollar relate it even to the pre-Euro Romanian “leu,” the Bulgarian “lev,” both derived from the leeuwendaalders, and Slovenia’s “tolar.” It is fitting that the name of the mighty American dollar should have arisen but a stone’s throw from present-day Wall Street, even if its etymological origin is actually a small valley in Eastern Europe.

The miners of Joachimsthal/Jáchymov hauled many tons of silver from the Krusné hory Mountains under harsh and dangerous conditions not too dissimilar from the mines worked in Colorado’s gold and silver boom times. Experience taught them that one of the indications that a vein of silver was beginning to run out was an increase in the black material associated with the silver. They called this “pechblende,” pitch-black mineral, but the name was a pun since peche is also German for ‘bad luck.’ No one could have guessed that the black mineral would turn out to be pivotal in the fortunes of not only Jáchymov, but also of the world.