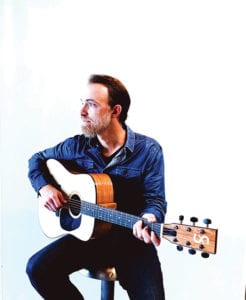 Mentors and idols have told me that to be a better writer, you have to be a better reader—the implication being, if you love a thing enough, you’ll know it inside-out. Simple enough since, for the most part, I expect writers are also bibliophiles.

“For some, the love of these instruments can’t be satisfied by merely playing them—there’s a deeper need to know and understand them from the inside-out,” Jarrett Schaub told me as we discussed the inception of Schaubhaus Guitars, his custom guitar building studio. “I want to bring the beauty of the traditional luthier craft into this age of mass-produced instruments using the time-honored methods and wisdom passed down to me,” he said, because Schaubhaus Guitars is built as much on passion as it is on history.

Jarrett said, “I built my first guitar in 2002 in my grandfather’s guitar shop under his tutelage.” His grandfather, Reid Schaub, was a talented musician in his day, playing with Buddy Holly and The Leon River Stump Jumpers, as well as forming a family band. Besides talent for playing, Reid was also a skilled luthier, having begun building guitars in 1968. “My family had a tradition of meeting in the guitar shop on weeknights, and there were usually 5 or 6 of us aspiring ‘luthiers’ in there, learning and working together on our own guitars, mandolins, etc. My grandfather had a lot of collected wisdom to share,” said Jarrett.

Jarrett inherited the performance gene and toured Texas for several years with The Jarrett Schaub Band. “I took a break from playing live venues in 2012 to focus on my daughters,” he said, mentioning that it was precious time, not only with his family, but to refocus his passions and goals.

“Moving to Evergreen allowed me to slow down, spread out and get back to my roots,” said Jarrett. “My mother passed away last year and this led me to really examine myself and my goals. So I went for it and constructed my own guitar shop behind my house. My dad traveled from Texas to help me build it.” This studio itself was a labor of love, requiring a significant amount of time, energy and skill to prepare a space worthy of building guitars. Even the tools can take work to accumulate, and Jarrett said that in the end, he built some of them himself. Of course, the time put into the studio is only preparation for the work that goes into crafting a custom guitar.

“A truly handcrafted guitar can take somewhere between 75 and 100 hours to finish,” explained Jarrett. “It takes me about five weeks, because I build them during evenings and weekends. My grandfather used to say that parting with a finished guitar feels like giving a piece of yourself away, and he was right.” But the result is a thing of beauty, something built to last, and a pure creation that boasts its own significance. Jarrett said, “Each guitar has its own unique sound and personality, and I think that’s the best reason to buy a custom guitar. No one else will ever have one like it, and they’re just beautiful to see and feel and hear.”

For Jarrett, creating Schaubhaus Guitars is like marrying history to the future—a skill and a passion. “I just want to build guitars because it makes me happy, and I hope that along the way, I’ll meet many more people who share my passion,” he said, and added hopefully, “and if I succeed in keeping this tradition alive, it would be amazing to pass the torch to my daughters one day.”

As he builds Schaubhaus Guitars from the ground up—and from nothing to a beautifully made instrument—he is also revisiting the other aspects of music he loves, once again booking shows and writing his own music. “Evergreen is very good to its artist community and there are a number of talented musicians who call it home,” he said. “There’s no better time or place for a musician to put him/herself out there.”

To learn more about both Jarrett’s guitars and music, please visit schaubhaus.com or follow along on Instagram at @mr.schaubhaus.