Music of the Times 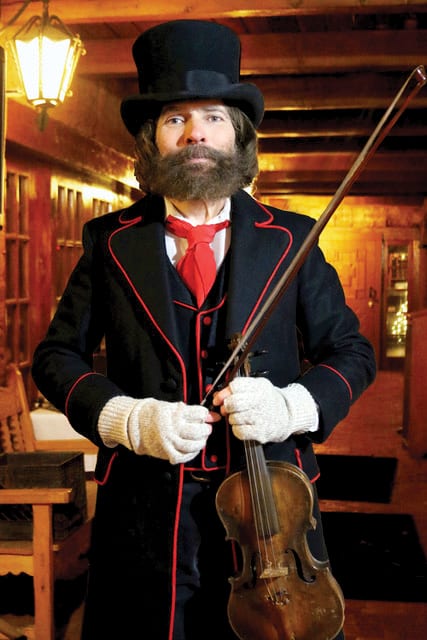 The impacts of 2020 are apparent everywhere, across industries, from large urban areas and into our smaller mountain communities. COVID’s effects have changed the way we see the world, the way we live our lives. I have spent a good deal of energy on uncovering those silver linings, and as a natural realist, it’s important to identify those changes that are lasting. It doesn’t mean it’s bad. It’s just different.

For example, I haven’t had a live show to share in a long time, mostly because local musicians haven’t booked many live shows themselves. While I spent last month rounding up ideas for bringing holiday cheer into your homes from around the world, one local musician was doing the same.

Rex Rideout, the talent behind Time Travel Music, who ordinarily puts on an annual Christmas show that benefits Conifer nonprofits, wasn’t about to let tradition and community outreach fall to the wayside in a pandemic. Instead, he held his fifth Christmas performance on a live stream, and now a recording of the concert lives on his YouTube channel.

“Christmas is a time of giving,” said Rideout. “Back in 2016, I wanted to give something directly to the Conifer community. I approached the Venue Theatre, and they took a chance on me. I’ll never forget that.” The Venue Theatre has continued to host him each year since. This year’s concert benefitted the theater as well as Mountain Resource Center and the Conifer Historical Society. (For those still accessing the YouTube performance and wishing to donate, there is a button at thevenuetheatre.com/shows.)

Rideout’s musical project, Time Travel Music, certainly lends itself to Christmas, but he does plenty more than just an annual Christmas concert. “I have been offering musical lectures and shows at museums and historic sites for over 35 years,” he told me. “Early on, folks would come up and say, ‘the way you present your music seems like we are actually hearing someone from the 19th century. It is like you are taking us back in time.’” Thus, the moniker!

Exploring the music of the early American West, fans of Time Travel Music know they’ll get more than just a wonderful performance. Rideout approaches his music as an historian and has consulted manuscript materials, diaries and journals, early sheet music, historic photographs, vintage recordings and oral histories to ensure his content and performances are genuine. For Rideout, this passion began as a child when he met a man named Lloyd Weddell.

“[Lloyd’s] family was one of the first to settle in that region and he was skilled in the old trades he learned from his grandfather. He was keeping those frontier skills alive,” explained Rideout. “He taught me to blacksmith, build log cabins and play the fiddle.” It was the music, however, that most deeply resonated with Rideout. “Those old Civil War tunes connected with me. With each generation, we lose some of our old traditions. Like Lloyd, I am doing my part to save as much as I can.”

What was most interesting to me, upon hearing Rideout’s story, is how far-reaching his musical project is in light of the times. While he’s immersed in the Old West days we love to romanticize, taking his listeners back to another time that wasn’t necessarily easier—just boasted different hardships, he is also here in the modern West, in the midst of a pandemic like all the rest of us, navigating the new virtual boundaries of existence.

“Prior to this pandemic, I had never recorded videos or put any shows online. Just after St. Patrick’s Day, everything shut down and I had to find another way to share my music,” said Rideout. “It’s been a steep learning curve of tricks for this old dog, but I figured things out.” Now you can find Time Travel Music all over the internet, with live shows on Facebook or Zoom and recorded shows and other songs on YouTube.

Considering the breadth of time traveled in Rideout’s music, 2020 has propelled him into the future. While the melodies are nostalgic for those of us settled comfortably in the West, the “new normal” for musicians has sent Rex’s music far outside the confines of geography and time. “I’ve been on Zoom shows with 40 other musicians from around the world, and we are sharing our music together with an audience from all over. Who would have ever imagined such a thing was possible?”

In a way, it sheds a whole new light on the name, Time Travel Music, and—still pointing out these silver linings here—has given legs to Rideout’s goal of preserving important pieces of our past. Historical preservation is important, as is the recognition of music’s power as a conduit. “It is inspiring and beautiful to see not only musicians, but other artists finding ways to present their [work],” said Rideout. “I love how everyone is finding new ways to share what they love with others. It might be creating clever videos, or new ways to show artwork, or taking guests on a virtual tour through historic sites. People find a way.”

Let that be the anthem for this coming year: We find a way.