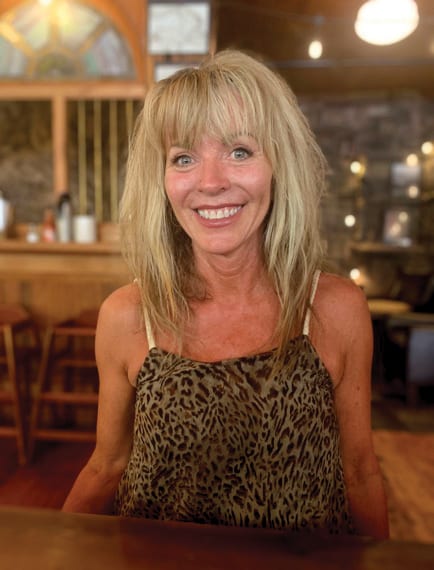 “…I’ve learned I can hit those high notes I didn’t think I could hit because now I have the confidence to do it.”

With her impeccable hair and prize smile, it was easy for me to spot Lisa Delia when we met for the first time at Muddy Buck last week.

“And cowboy boots,” she said. “I’m always wearing cowboy boots.” She showed them to me, and I’m sure the bling is trademark, but Lisa is modest. That’s not what she’s known around town for. Rather, for the last 17 years, Lisa has made her mark as a sought-after female vocalist for many local bands and recording projects. Her raspy alto tone and the power to belt even the trickiest rock-and-roll has to offer, Lisa’s notoriety is well-earned—though she will tell you it’s unexpected.

“I didn’t even know I wanted to sing until I got older and was out on my own,” she explained, recalling the time her kids were nearly grown and she was navigating life after divorce. “I would sing along to the radio and I thought, this would be fun to sing with someone.”

In a world that’s constantly screaming, “be all you can be,” or “live and let live,” either putting all the onus on the individual or none at all, Lisa relishes the special place where serendipity meets good old-fashioned gumption. “Everything happened to get me right here where I am today,” said Lisa. “I don’t think if I’d done something different that I’d be sitting here—it’s a destiny thing. But you manifest it.”

Fate answered Lisa’s notions of singing one evening around the campfire. “Everyone was singing and I started harmonizing. Well, it got back to John Erlandson and he said we should get together and practice,” Lisa remembered. “I was so nervous. I had no confidence and didn’t have the capability of projecting. But John is the one who got me from singing in the shower or the car to singing behind a microphone. I owe him tremendously for that.”

Self-realized, Lisa’s confidence grew. “And confidence is the main factor,” she said. “The more confidence you have, the better your voice is going to be. Over the years, I’ve learned I can hit those notes I didn’t think I could hit because now I have the confidence to do it.”

This combination of destiny and self-assuredness fast-tracked Lisa on her new path to singing. “John and I would sing duets, and he would bring in people to sing with us,” Lisa said. “We still sing together—we sang at Boogie at the Ranch this year. And I sing with everybody else too. If you see a band onstage and I’m in the audience, they’re going to get me up there somehow. Either I’m going to run up or they’re going to ask.”

I called Lisa a freelance vocalist. “I guess I am,” she said. “People hire me to sing on their recordings. They need a studio singer, and people started asking me to do that—mostly at Evergroove. I’ve sung on about five different albums.”

The sense I got was, when it came to her new dream, Lisa was simply up for it. Where many are on a determined path of purpose, forcing fate’s hand, Lisa has found joy in what comes her way. This includes a number of different bands, with varying members, under different names. Most recently, it’s Band Kamp, with Kyle Wilson on guitar; Michael Reeves on lead guitar and keys; Jack Demeis on drums; Wendi Richardson on guitar; and Jamie Richardson on bass. When COVID hit, Band Kamp was shut down after only one gig under that name.

I say “shut down” loosely—they just weren’t playing in public. Despite their talent, that’s not why the band gets together, though. “We’re like family. I love them. It’s just fun,” Lisa told me, and that’s why the band found ways to safely meet during the pandemic. Their friendship and quest for a good time is evident in everything they do, including their band name, which, of course, I asked about.