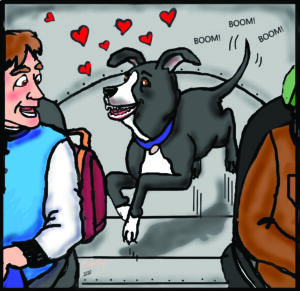 I have written about Jasper before. When my husband, Rob, was a teen, and well into adulthood, Jasper was his dog, companion and partner in crime. He was a stray, wiry in stature, and big on stamina. He pulled Rob on his skateboard for miles along the bike path to the beach several times a week. He had a thrill for speed and a bigger thrill for the chase—proving it by scattering and then killing one of my mother’s chickens in an epic, feather-flying yard scene. He balked at authority, flaunting his independence by getting loose from a kennel and wandering O’Hare airport. He defended my husband (more than once) when he was outnumbered in a fight. He was capable of incredible feats of loyalty and many a misguided foray into mischief. In short, he was a smallish dog blessed with an oversized, Hemmingway-like spirit—that is, larger than life, reckless in adventure, and lacking the normal confines of fear. He also had a keen eye for things that brought him joy.

The other day, I was reminded of a particularly thrilling day in the life of Jasper. It was an unusual experience in the late ’70s that most likely wouldn’t be possible today. You see, Rob was in Colorado, making his way with Jasper back to Santa Barbara, where we grew up. His old car quit unexpectedly just outside of Green River, Utah, and simply could not be coaxed to go further. There were few choices available to a young man traveling with his dog, but as luck would have it, there was an airport close by. This airport was not of the large commercial type, but rather an airfield catering to small planes, piloted by the type of independent-minded men who fly them.

Jasper sat next to Rob on the tarmac, watching the planes. His stance was alert and curious as the activity adherent to a small airfield played out. He watched planes take off and he watched them land. Rob patted him on the head, reminding him to stay grounded. It was entirely possible, given his history, that Jasper might chase one of those planes as it taxied down the runway.

Rob managed to secure a seat on a small, fixed-wing plane, which would reroute him and Jasper into what was then Stapleton Airport to continue his journey. As he got ready to board, the pilot asked if Jasper would be okay to be loose in the plane. It is a lot easier to fit a dog’s body into a small plane than it is to make space for a big dog kennel. “If he can behave himself, he can sit on the back seat,” the pilot said. Rob assured him that Jasper would be okay. Being loose in an airplane hadn’t been tested exactly, but there were no chickens or cats to chase and they were the only passengers, so it was unlikely that there would be trouble. Rob vouched for Jasper, threw his bag into the back, and they boarded the plane.

From the moment the plane began taxiing down the runway, it was obvious to the pilot and Rob that Jasper was having a great time. He wore an expression of pure joy as he shifted his weight from paw to paw, panting excitedly and watching out the windshield as the ground dropped below. This airplane ride was better than riding in a car—even a fast car ride (and he’d had many). Nothing in his prior adventure-seeking experience could compare. As the plane climbed steeply, it was clear that Jasper liked the ride. He turned to Rob and licked his chin, then fixed his gaze out the windscreen between the two front seats, a silly grin on his muzzle.

When they reached elevation and were flying along, they hit a pocket of air that made the plane suddenly dip. It was the kind of drop that makes a significant lurch in the gut, like the feeling you sometimes get on an elevator ride. Rob looked back at Jasper, hoping he wasn’t stressed. The pilot glanced back and then laughed. Instead of a distressed whine or whimper, Jasper’s tail was thumping wildly. He liked it—a lot!

The pilot, who was clearly enthralled with Jasper, said to Rob, “If it’s okay with you, I’d like to try something. I have a feeling he will love it.”

Rob shrugged. “Why not?” So, the pilot pointed the plane downward and dove, descending quickly, which created a momentary weightlessness, accompanied by a big elevator-stomach feeling. It wasn’t by much, but Jasper’s four paws did leave the seat as he got weightless for a few seconds. When the descent was over and the plane leveled off, Rob and the pilot had a good belly laugh watching Jasper prance and lick his chops and grin while his tail noisily beat every surface in the back, not unlike a drum solo. It was a big boost for them to see Jasper’s joy surge through every inch of his body. And that is how the plane ride on that impromptu trip became known as the day Jasper got a thrill.