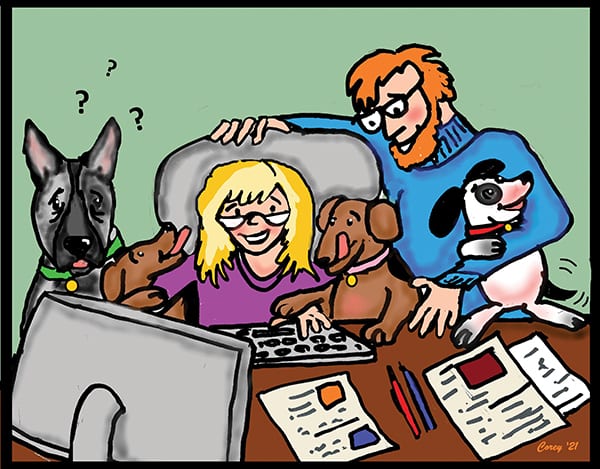 Have you ever walked into a business and been met by an affectionate dog? You think your encounter will be all business, but suddenly, your whole day just got a little bit better and it’s all because you were able to interact with a mascot dog. Even the Stone House, home to this publication, has had its fair share of mascots. If you pop into the Stone House today, you might spot Halsey, Editor in Chief Holly Jorgensen’s Whippet puppy. And the Evergreen Chamber downstairs was host to a well-known mascot Westie named Bentley. Best therapy in the world, in my opinion. Personally, I get excited if an office dog makes a beeline for me because my husband’s popularity with dogs is legendary. If a pup wants to make sure I’m first in line for some loving, I’m over-the-top thrilled—and just a teensy bit smug.

If you’ve followed my articles at all, you already know that our two aging dogs, Mimi, and Toby, spend their days sharing our workspace. Although it seems necessary to keep them close by at this late stage in their lives, the truth is that they have been mascot dogs for all of their lives. Since they were pups, with few exceptions, each day they were loaded into the truck and carted off to work, where they greeted customers, hogged the one couch, and generally made themselves part of the experience, for better or worse. These days, they are far too old and creaky to get up on the furniture and often cannot muster the energy to greet anyone, but still, here they are at nearly 15 years old, joining in the social atmosphere in their own way.

Here is what we veterans have learned about mascot dogs in the workplace:

—It is a challenge to drive 20 minutes each way with a barking dog whose voice has yet to change. To call it a challenge is being kind. When Toby was a pup, we used to play ‘Rock, Paper, Scissors’ to decide whose car he would ride in. He outgrew the barking (thank goodness) about the same time his bark went from a soprano to a tenor.

—Dog-loving customers are thrilled to share the office with dogs. We have had several ladies who claimed Toby, who was by far the most affectionate, as their ‘boyfriend,’ going out of the way to come see him. Still others were thrilled by the tail-wagging greeters and gladly egged them on. Dog-lovers love dogs, and any day surrounded by dogs is a good day made better.

—Customers who are not dog lovers need to be kept separate from mascot dogs. If everyone adhered to the schedule, it was easy to manage simply by leaving them home that day. It was the pop-in customers that made us scramble. And scramble we did, moving them into the back shop, tucking them into our personal cars. Whatever it took.

—Not all dogs make good mascots. I showed up for an appointment at an in-home insurance company that had two small poodles in crates in the small office. For the entire 20 minutes I was there, both poodles barked in a shrill tone and bared their teeth menacingly in my direction. Every so often, the agent ‘shushed’ them, but they paid no heed. Seeing as the office was only part of an entire house, wouldn’t it have been a better move to put the crates housing the snarling beasts outside the office for the duration of the appointment? The answer is yes.

—A mascot dog given to nipping should not be set upon the counter. I have seen that too and it is unacceptable. A customer should not be worried about losing a digit simply for approaching a counter to do business.

—Be ready for the unexpected. One of our dogs freaked-out many a sandal-wearing customer by sneaking under the desk to lick their toes. It requires a lengthy explanation and is not universally accepted as a humorous trait. The same is true of crotch-sniffing. Totally acceptable behavior to dogs—not so much to humans.

What makes a good mascot dog?

—A good mascot dog is a pleasant addition to the business.

—A good mascot dog is friendly, but not in a knock-you-down way. It’s fair to say that a customer that is pinned against the door by a 120-pound dog will not consider it a good greeting.

—A good mascot dog does not bare its teeth menacingly nor bark constantly.

—A really good mascot dog never has gas. But we all know that is asking too much of any dog. Be realistic.

—A good mascot dog is not freakishly large, but I’ve seen exceptions. I entered a clothing store that had a gigantic Great Dane sprawled out on a huge dog bed right in the middle of everything. It was so large and so sweet that it got lots of petting and attention and didn’t seem to upset the flow of business at all.

—No kind of mascot dog, regardless of breed or temperament, will endear a person who does not like dogs or is afraid of them. Don’t bother trying to win them over. Tuck the dog out of sight to make the customer more comfortable.

—A good mascot dog likes people. A great mascot dog likes children. A business owner sensitive to both dogs and people knows when the human behavior in the room becomes too much for the dogs. Over the years, we saw many children who were teasing or too erratic in their movements for our dogs’ comfort. We quickly moved the dogs out of reach.

—There is no such thing as a good mascot dog or cat if the business serves food. End of story. The last thing a customer wants to share a deli counter with is a dog or cat, and the health department has strict views on this very thing.

Now, you’re probably taking a closer look at your canine companion, which begs the question: Is your dog a good candidate for an office mascot? If you have a friendly, well-mannered dog and a dog-friendly environment for your workspace, you may want to consider adding your pup to the long list of happy mascot dogs in the area. Dog lovers everywhere will celebrate your decision. And everyone else—well, they can be worked around.