Marco Polo and Other Games to Play With a Blind Cat

So, our household had a couple of birthdays early last month. Milla, who turned 16, is now old enough to drive. Except that she’s blind. And a cat. Murray Thunderpants, also a cat, turned 17. Considering he’s diabetic, toothless and a bony shadow of his former magnificent self (although still magnificent), we are pleasantly surprised every morning that he’s still with us. I do think one of his prime reasons for living these days is to just piss Milla off since they’ve had a love/hate relationship for almost 16 years (he loves her, she hates him), and now she can’t see him coming.

But let’s start with the story of Murray. Back in the summer of 2003, we had just moved to our first farm and were, for the first time, pet-less. Our old cat Toulie had just passed away and we had Anatolian Shepherd puppies and alpacas on the way in another month or so. Jim and I agreed that we would wait to add any more animals until we got the puppies and ’pacas settled. I made it four days. My folks and I were at the original Conifair at Beaver Ranch and my mom came up and said, “There’s a girl over there selling kittens. You should go get one.” Considering my mom’s aversion to cats, I figured these had to be magical kittens indeed. Turns out they were barely four weeks old, way too early to be weaned, and there was a small, grey fluffy one with blue eyes that said, “I’m yours… take me home.” I forked over my 10 dollars, tucked him in my raincoat, and that was that. Well, except for the obvious issue of explaining him to Jim. Mom, of course, suggested, “Shouldn’t you call Jim?” To which I replied, “Aw, look. No cell signal here. That’s a shame. I’ll just have to take him home.” Upon arriving home, I walked in the house holding Murray about 2 feet out in front and said, “Look what I found.” Jim took one look, his already big ol’ heart grew even bigger, just like in “The Grinch,” and voila! We had a new kitten.

A while later, we got the idea that Murray needed a pal. So off to Intermountain Humane Society we went and came home with Sophie, a little black shorthaired girl, who was just a few months old. Murray was in love and it was mutual. Unfortunately, Sophie was actually sick and passed away just six months later. While we were incredibly sad, Murray was devastated. We called IMHS again, asking if they had any female kittens, and the only female under a year they had at the time was another black shorthair. We went to meet her, fell in love (really, how could you not?) and brought her home. She had these brilliant green eyes (Jim was a fan of the movie “The Fifth Element”) and voila! Milla was now a member of the family.

From the get-go, Milla was less than impressed with the magnificent Murray. He just wanted to cuddle… she just wanted to poke him in the eye. Which she did. On a regular basis. Enough that every time he wound up walking around with a squinty eye, he got the nickname, Dread Pirate Murray. Anytime he got close, she’d hiss, growl, scream and poke him in the eye with unerring accuracy. Initially, we just figured she was kind of a bitch. Then one day we saw Murray come out of freakin’ nowhere with a flying tackle, roll her about a foot and a half, and then saunter off like nothing happened whatsoever. That’s when we realized he had it coming, and that’s been our cat life the last 16 years. Hiss, growl, poke in the eye, and the occasional “let’s sit close and slap each other and see who can scream the loudest” routine. (Milla always wins. Hands down.)

Fast-forward to now. As mentioned, Murray is diabetic, so he gets insulin shots twice a day and spends his time alternating between being the biggest lovebug there is, going around whining enough to earn the new name, “Murray Crankypants,” and occasionally still thundering through the house as fast as he can go. His big ol’ feet are still furry enough he can slide into a room like Tom Cruise in “Risky Business.” And overall, at this stage, we give him whatever he wants in order to keep some weight on him. (Yes, I know a diabetic cat shouldn’t get ice cream. No, I don’t think a couple of licks or 12 will kill him, and it makes him very happy.)

Milla, on the other hand, is a compact little tank, but certainly now has age issues of her own. A few years ago, she developed a neurological condition that totally screwed with her balance, so she walks a little wonky, often in circles, and occasionally tips over. She’s also gradually gone blind in both eyes, but gets around surprisingly well. (Yes, I know it’s wrong to laugh when she walks into a wall. Yes, I do it anyway, then promptly feel guilty.) Since she can’t see Murray, but still hates him with the heat of a thousand suns, he makes a game of walking by her, giving a little swat, and then moseys off, casual as can be. She, meanwhile, will growl, hiss and swat at the air for a solid two minutes before figuring out he’s not even close. I’ve been known to tell her that if she continues to be so crabby, I’m going to rearrange the furniture. That rocking chair? I’m moving it two inches to the left. And when she wakes up in the coat closet (her favorite napping spot) and yells because she forgets where she is, I yell back, “Polo!” 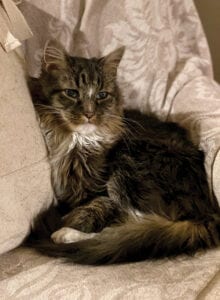 Seriously, though, when I look back to just even the last couple of years, it’s amazing how much we regularly adapt our lives to take care of these old fur balls who steal our hearts. For some time now, our clocks (and social availability) have been set by what time the alpacas need to be put up for the night and what time Murray’s next shot is. Milla has declined dramatically the last few weeks, so now we’ve cued to her new patterns and can tell when she’s lost and we need to trot her down the hall to her litter box. And, while it’s not quite there yet, we know the time when they both won’t be with us is likely not too far down the road. So, we enjoy the time we still have, there’s much cuddling and petting, and occasionally still a great game of Marco Polo.