March is typically an especially enjoyable month for sports fans. The NBA and NHL seasons are winding down, with teams jockeying for playoff spots or seeding and home court advantage. NCAA Basketball takes center stage, with conference tournaments leading into the phenomenon known as March Madness. Major League Baseball season opens in late March, signifying the “official” beginning of spring to all serious sports aficionados.

As with essentially all aspects of life, the sports world has been changed dramatically by the coronavirus pandemic. Athletic competitions came to a virtual halt the night of March 11. It was discovered that Utah Jazz center Rudy Gobert had tested positive for COVID-19. Minutes before tip-off, the Jazz and Thunder walked off the court in Oklahoma City, and an announcement was made that the game was postponed. Soon after, the entire NBA season was postponed. Effectively, the sports world was placed on hold.

The NHL and NBA are still hoping to conclude their regular seasons and playoff at some point. MLB is considering various plans including having 10 teams apiece play in three different “pods” in Arizona, Florida and Texas. Numerous college athletes, including basketball and hockey players, missed out on the chance for national championships. Many high school and collegiate athletes entirely lost out on their senior seasons, signaling an end to their careers in their given sports.

But what if this universally life changing health situation had never happened? If you are like me, it’s impossible not to imagine how your favorite team’s seasons would have played out. The Avalanche and Nuggets were in the homestretch of strong regular seasons, with very realistic hopes of winning their divisions and, in the case of the Avs, the Western Conference. The Yankees (sorry, my New York sporting allegiances will never die) had signed pitching ace Gerrit Cole, who they hope will be the missing link to the franchise’s 28th World Championship. The Rockies were eager to bounce back from an unexpectedly poor 2019 season and return to the playoffs as they had done in 2017 and 2018. Come with me as I bring you up to speed with my version of the sporting universe, sans virus, from mid-March to mid-May.

The CU Buffaloes mens basketball team sputtered into the postseason, losing their final five regular season games. Still, they qualified for the NCAA Tournament on the strength of their 21-11 record and quality wins over highly ranked Dayton and Oregon. After rallying to capture the Pac-12 conference tournament, the Buffs were rewarded with a No. 10 seed in the East regional. Madness set in, as CU defeated Purdue before stunning second seeded Duke in overtime. The Buffs would go on to beat West Virginia, before being eliminated by Villanova in the Elite Eight. The Kansas Jayhawks ultimately defeated defending champion Virginia to claim the national title. On the women’s side, Sabrina Ionescu, the all-time NCAA leader in triple-doubles, led Oregon to the national championship, as the Ducks knocked off South Carolina in the final.

The Denver Nuggets won their last four regular season games to finish with a 56-26 record. The Los Angeles Clippers stumbled down the stretch, allowing Denver to claim the number two seed in the Western Conference. Denver rolled over the Dallas Mavericks in the opening round, four games to one, to set up a showdown with Kawhi Leonard and the Clippers. Things looked bleak when the Clips took a 3-2 series lead, with Game 6 being played on their home court. Trailing by a point, with the final seconds ticking down, Nuggets center Nikola Jokic hit an off balance fadeaway jumper to give Denver a 109-108 victory. Riding that momentum into Game 7, the Nuggets treated their home fans to a thrilling 103-98 win, setting up a matchup with Lebron James and the L.A. Lakers, set to begin May 18. The winner will advance to the NBA Finals.

The Avalanche and St. Louis Blues were neck and neck through the final month of the NHL regular season. Heading into the season finale between the two teams on April 4, the Blues led the Western Conference by a single point over Colorado. St. Louis carried a 2-1 lead into the third period before Rookie of the Year candidate Cale Makar scored on a dazzling end-to-end rush to even the score with five minutes remaining. The game appeared destined for overtime, until Nathan McKinnon used his speed to get behind the Blues’ defense and lift a wrist shot over the shoulder of goalie Jordan Binnington, with under a minute to play. The victory gave Colorado home ice advantage through at least the first three rounds of the playoffs. The Avs have made the most of it, eliminating the Vancouver Canucks and Edmonton Oilers, with a rematch with the Blues to decide the Stanley Cup final participant from the West on the line set to begin May 19.

Coming off a disappointing 71-91 record and with very little done to upgrade the roster, hopes were not high coming into the season for the Rockies. Management seemed to hinge their hopes on significant turnarounds by numerous players, the pitching staff in particular. As of mid-May, general manager Jeff Bridich’s dubious “strategy” seems to be paying off. Kyle Freeland, the pride of Thomas Jefferson HS in Denver, appears to have recaptured his 2018 form with a 6-2 record, including a two-hit shutout against the rival L.A. Dodgers in the lefty’s second start of the year. German Marquez has dominated, winning seven of eight starts while sporting a 2.35 ERA. The bullpen, having sabotaged the 2019 season, has made amends with Scott Oberg in the role of lockdown closer. The offense, led by Nolan Arenado, Trevor Story, David Dahl and Daniel Murphy, is reviving memories of the feared Blake Street Bombers of the ’90s. As of May 15, Colorado sported a 28-16 record and stood 1.5 games ahead of the Dodgers in the National League West.

The Yankees stormed out of the gates, winning their first eight games. Cole is living up to his monster contract, having pitched his first career no-hitter while compiling a 7-0 record and leading the American League in strikeouts and earned run average. Gleyber Torres looks like a future Hall of Famer, near the top in every major offensive category while playing Gold Glove caliber defense at shortstop. New York’s 31-14 record has opened up a three game lead over second place Tampa Bay in the American League East.

Hopefully, there will be real games, statistics, boxscores and playoff series in the not too distant future, even if they are conducted without fans present. While sports are clearly not a top priority with all that is currently going on in the world, they certainly provide a pleasant diversion from everyday life. It is hard to believe it has only been two months since life as we know it changed so drastically. Stay safe everyone. 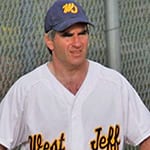