Recap of Chapter 21: Life is going well for Haze. She embarked on a new art series, starting with Sydney as her first subject. She cleverly struck a bargain for access to promising models. All she had to do was introduce Jake’s famous author sister to Sydney, who apparently was her number one fan. Fully immersed in her painting for hours, Haze was saved by Jake’s arrival, his arms loaded with dinner, which she pounced on without apology.

Summer pushed its way into Evergreen, melting the last patches of snow from the shady spots under the trees and filling the afternoons with welcoming warmth. Mother elk appeared onto the scene with their babies in tow, as Haze watched from her studio windows. She loved everything about spring—from the warmer weather to the new generation of wildlife sightings. On the lake, mama ducks swam across the surface followed by a line of fuzzy yellow ducklings, and the birds that had left for warmer climes returned, filling the garden with song. Where Haze had placed bird baths and suet feeders was more about her viewing pleasure, rather than the symmetry of a planned garden space. And so, while relaxing in the window seat of her studio, Haze enjoyed a wonderful view of the animal antics outside.

When she wasn’t gazing at the beauty surrounding the lake, she was immersed in painting the pieces of the American Women series. The Sydney piece came out fabulously. Of course it would with such a great subject. Haze kept secret the fact that it was completed. She could imagine the parade of people Sydney would want to bring over and she wanted to move on to the next subject without interruption. This next piece was of a young woman sitting at the pottery wheel, her hands wet with clay and a look of pure concentration. This canvas was a more manageable size which gave her options on where to paint. Sometimes she took the whole operation outside, painting with the sun on her shoulders. Crowley made mischief chasing squirrels or napped in the grass while she worked. With the arrival of summer and the knowledge that her art was coming together, Haze experienced a boost of energy and contentment.

Jake popped in whenever he could, but between building cabinets and custom furniture in his workshop, tending to his garden, and volunteering at the animal shelter, he had a busy life of his own. Still, they managed to make time for each other. Jake was nurturing by nature, so sometimes he brought a pizza or Chinese, and other times he brought groceries to cook. While he was there, he tended to the plants outside and checked on the herb garden. He wasn’t paranoid—she meant it when she said the threat of death was real.

Tonight, it was Haze’s turn to cook. She grilled salmon with a honey/teriyaki glaze and rubbed sage picked from the still healthy (thanks to Jake) herb garden. Side dishes included scalloped potatoes, garden salad and grilled asparagus. For dessert, she made a Dutch apple pie (Jake’s favorite) to be topped with French vanilla ice cream. It was visually beautiful and promised to be delicious. Jake was due to arrive any minute, so she set out glasses for chilled Chardonnay and tossed the salad, mesmerized by the agitation of peppers, mushrooms, radishes, carrots and cucumber with the lettuce and greens. While she cooked, Haze sipped red wine and when her glass ran empty, she glanced at the clock. Jake was late. She poured a splash more into her glass. It happens. Not usually where Jake is concerned, but still, it happens.

When 10 minutes turned into 20, Haze texted:

Hey, You—your delicious dinner will be not-so-delicious if you don’t get your cute little butt over here quick. Where are you????

It was a silly exercise since she knew he would never read, let alone respond, if he was driving. Whenever he was on the road, Jake’s cell phone lived inside his backpack. Twenty minutes turned into 30, then 45. When Jake was over an hour late with no response to her text, she tried again:

Seriously, J, you’re freaking me out. Being late is so NOT you. Please let me know you’re OK!!!

No response. The dinner was ruined, the salmon, at least, and Haze paced, getting increasingly worried with every minute that ticked by. Her mind was going to dark places that she knew would cease the instant Jake walked through that door, an apology ready on his lips. She pictured herself wrapping her arms around his neck, grateful yet shaky with adrenalin, relieved and mad at the same time. She snapped into action, wrapping the food to store in the refrigerator. The salmon would still be good in a salad, she reasoned. The scalloped potatoes better the next day. The pie would keep, and she could cut up the asparagus as part of the salad, which would be good for lunches. She held the wine bottle tipped over her glass, thinking it would help calm her down, but then stopped. What if something was truly wrong? She had to keep her wits about her. She needed a clear head now, come what may.

Crowley picked up on Haze’s angst and began to get underfoot. “It’s okay, buddy,” she said, crouching down to rub his neck. “Jake is late, that’s all. And when he steps through that door, he is in so much trouble. That’s right, he’s dead meat, bud.” 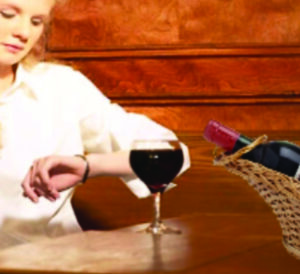 The sound of her cell phone ringing made her jump. It was Jessica, Jake’s twin sister.

Haze hesitated, wondering what this could mean. Finally, before it turned into a missed call, she swiped the button. “Hello?” she said cautiously.

“Haze? This is Jessica.” She sounded off and a little breathless. There was a lot of background noise. Was she walking? “Can you hear me?” she asked. She sounded frustrated or harried. Haze affirmed that she could hear. Jessica continued. “Um, listen… I need to tell you something important.”

Haze froze. A wave of fear loomed overhead like a hovering monster, then crawled up her spine, settling into a buzzing in her ears. She waited. This set-up boded badly. The news would not be good—of that, she was certain. One second, two seconds, three seconds waiting while Jessica breathed into the phone, gathering courage. Then came the words that Haze could never plan for; the words she never thought she’d hear.

“There’s been an accident.”