Recap of Chapter 19: In the midst of a fun and carefree afternoon together, the subject of the future came up, which revealed some surprising facts. Haze was caught completely off guard to learn that Jake does not believe in marriage. He declared without hesitation that his future with Haze would never include a wedding.

It was an impossible request and yet too irresistible to pass up. In the entire time Haze had known Jake, this was the one and only occasion that had presented itself where she could meet his family. All of them at one time. The phantom initials from the ever-present bracelet Jake wore brought to life. It seemed like an impossible request on the heels of the revealing discovery that he did not believe in marriage. It was a tense conversation that went nowhere. No matter how she framed it or what questions were asked, he would not budge. Maybe, just maybe, by watching his family interact, she would gather some clues as to where he got his firmly held beliefs. He was so loving and romantic, so into family traditions. He was even nostalgic and sentimental about the relationship between his parents, who (presumably) were, in fact, married. It just didn’t make sense for him not to believe in marriage, so Haze was having a hard time accepting it as fact.

And here, just one week later, while she was still reeling from their last serious conversation, she was invited to a family event. And not just any event—the one and only mandatory Peterson family annual event. It was a simple backyard barbeque at their family home on the occasion of his mother’s birthday. There would be cake and good eats. She could bring something if she wanted. Haze decided on deviled eggs—always a barbeque favorite—a bottle of wine and a batch of oversized snickerdoodles, which she arranged in a napkin-lined, flat-bottomed basket. It was a sure bet. Who doesn’t love deviled eggs and cookies?

She wore a simple sundress, with a jeans jacket and cowboy boots and topped it off with some locally made jewelry she bought at Evergreen Crafters. It was an interesting combination of metals and natural stone beads that brought out the colors in her dress. It took some effort, but after a week in the studio, she managed to scrub the paint from her hands and fingernails. The stubborn blotches of paint at her cuticles nearly became the colors matching her dress.

When he picked her up, Jake acted the same as always. He was inclusive and loving and apparently unscathed by their last conversation. It was a head-shaker for sure. He loaded the basket on the back seat of his car and headed down the road. Home was a beautiful ranch house on several private acres, situated outside of Golden. The views were fabulous—turn one way and see the mountains—turn another and peek at the city lights. They were the last to arrive. Immediately, Haze was presented to Jake’s dad, Tom, who drew her in for a hug. He was welcoming and friendly and he had Jake’s same crooked smile and sparkling eyes. Like Jake, he was dressed in jeans and flip-flops, which made her giggle. Kendra, the baby sister, barely out of college, jumped on Jake’s back.

“This giant monkey on my back is Kendra. Kendra, meet Haze.”

“Nice to meet you,” she said, flashing a smile. She was a beauty. Haze smiled back.

Barbara and Jessica (Jake’s twin) came forward to introduce themselves. Barbara brought her a glass of wine and Jessica took her basket. They were both beautiful—similar but different. With sun-kissed, freckled cheeks and sandy blonde hair, the three sisters looked like a commercial for healthy living and the benefits of drinking milk. Haze couldn’t help but smile at all of them.

“These are the Peterson ladies,” Jake said, tipping Kendra off his back. “If you can call them that.”

“Don’t listen to him,” Kendra countered. “It’s well-known that he’s a practiced liar and a reprobate.”

Jake chuckled. “And so it begins. I thought I’d at least get to introduce you to everyone before the insults flew.” He grabbed Haze’s hand. “Let’s go find Charlie and Alan. They’re either harassing the meat on the barbeque or getting ready to cheat at horseshoes.”

“There he is!” came the shouts from the patio as the brothers spied them in the doorway. Alan was the spitting image of his dad and Jake, right down to the crooked smile and tousled sandy hair. Charlie, however, was a stand-out with his shaved head and mountain man beard. Same twinkly eyes, though. Maybe it was the beard, but Haze did not see the Peterson crooked smile in Charlie. The others on the patio came forward to greet them: the wives of Charlie and Alan and Barbara’s husband. Everyone was so healthy looking—so well-adjusted and happy and welcoming.

Making small talk, Haze couldn’t help but watch the interactions of the married couples at the party. Alan’s wife hand-fed him a deviled egg and he pulled her in for a messy kiss. She squealed. Charlie’s wife stood by him at the barbeque, holding out a platter for the burgers and laughing at something he said. Standing behind him, Barbara put her hands around her husband’s neck, and he kissed her hand. No one had kids yet. Did that mean something?

Jessica came to stand beside her. “Nauseating, isn’t it?” she said, eating a pita chip with hummus. “All this lovey-lovey stuff.”

“Oh, I don’t know. I’m kind of a sucker for the lovey-lovey stuff.”

“Not me,” Jessica said. “You won’t catch me in that trap.” She licked her fingers. “There will be no Mr. Jessica in my future.”

Now she had Haze’s interest. Jake’s twin doesn’t believe in marriage either. Intriguing. “No? No marriage in your future?”

“Nope. I intend to lead a devil-may-care, vagabond life—full of travel and mystery.”

Haze shook her head. “Tell me what?”

“I’m a mystery writer. I’ve had several published, all set in far-flung locales,” she shrugged. “I go there and then I write. It’s my schtick.”

“Typical Jake, not crowing about his own twin’s successes. Well, maybe he didn’t tell you about me, but I know all about you.” She raised an eyebrow. “I know you’re an artist—a talented artist—and that you are a marvel in the kitchen. I know you are afraid of plants, or, rather of keeping them alive. I know that you spilled a margarita the first time you and my brother met. And that he’s wild about you.”

Haze laughed. “Is that all?” 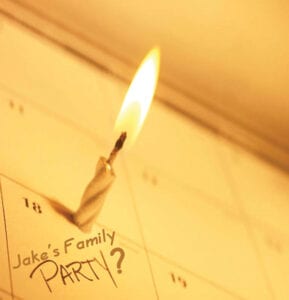 “No, but that’s all I’m allowed to divulge. Well, that and the fact that you are the only woman Jake has ever brought to a family event.” She stood still then, arms crossed, openly studying Haze. “And I can see why. You have a quality that is unique and original. And you’re beautiful.” She sipped her wine.

“Well, I can say the same for all of you.” She crossed her arms theatrically. “So, tell me, is it a requirement to be drop-dead gorgeous and utterly glowing with good health to be allowed to spend time with this family?”

“Seriously. I feel as if I’ve stepped into a commercial for clean living or natural supplements or something,” Haze said. “It’s daunting and unbelievable.”

Jessica snatched the wine bottle from the table and poured into Haze’s glass. “Oh, I like you!” she declared. “I like you a lot.”

The party wore on with great food, plentiful wine and robust laughter. Despite her vow to make this a fact-finding mission, Haze was enjoying herself very much. When all the food was consumed and many bottles of wine emptied, the patio lights were illuminated and the firepit was lit.

The party took on only a few moments of somber reflection at the time when the cake was brought out. It would have been the matriarch’s 68th birthday and her life was remembered with a few words said by Tom. “Michelle, we’re thinking of you today, knowing how much you loved birthdays,” Tom said, his glass raised. “You would be ridiculously proud of this family we created—and the people they’ve chosen to share their lives with.” It was a compliment to everyone present. “We love you today and always.” The family discreetly wiped away tears, raised a glass and toasted to Michelle, the never forgotten wife and mother for whom they all gathered to celebrate.

Murmurings of “Here, here!” and “We love you, Mom” could be heard over the clink of glasses.

Haze looked across at all the faces of this incredible family and could not quit smiling. Jake squeezed her hand and lifted it to his lips. His eyes shimmered in the light. “Thank you for being part of this,” he said with a look of pure love. And, despite herself, in that good and pure moment, Haze could care less about Jake’s feelings on matrimony.