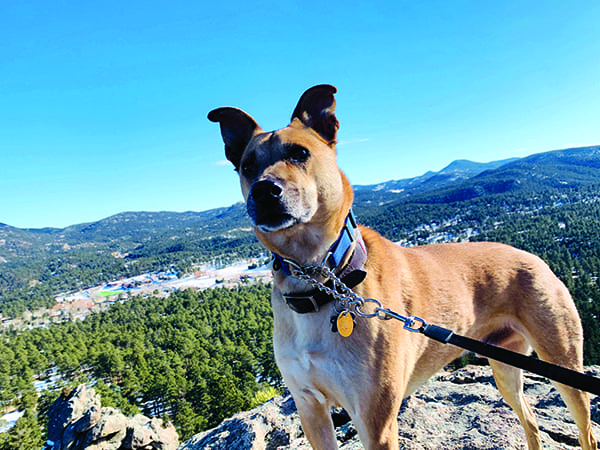 I own a $15,000 dog. His name is Woodrow (aka Woody) and he’s an 8-year-old mutt we rescued through Evergreen Animal Protection League (EAPL). But if you ask him, he never needed rescuing. Actually, I have often wondered if this dog was meant to stay with us. He’s as wild as the dingoes of the Australian outback and looks exactly like one too. He’s not a cuddler, but allows you to pet him. He doesn’t obey most commands, but will reluctantly come to you when he’s ready. He’s an awful leash dog. Between his wildly loud yelping and the consistent pull of my shoulder out of the socket, he does not make a good walking partner. And, if he is let off leash, you can pretty much say goodbye, ’cause he has much better things to do. Yet, yet, when I look into his sweet brown eyes, and bunny kiss his moist, supple nose, something takes hold of my heart and he can do no wrong. Plus, he makes an awesome copilot, a tremendous watchdog and is my daughter’s sleeping partner. But boy… has he given us a run for our money.

In his emerging years, Woodrow had tendencies to escape our large fenced yard and roam about the ’hood. He never did any harm, but loved to run with the many lady pups that lingered about our property. If I must say, he is quite the stunning alpha male. Several times, we were called by someone who found our escapee and we’d go and retrieve him with smiles of gratitude. Other times, we’d have to bail his sorry butt out of doggy jail and pay some ridiculous fines. We became tired of the shenanigans and needed to get serious about keeping him contained—we couldn’t afford it anymore!

We searched the fenced perimeter again and again for the weak spot to no avail. He was smart enough to escape when no one was looking! Until one day, Woodrow got sloppy and left behind the rusty tool he used to chip away at a secret hole in the fence, “Shawshank Redemption” style. We secured the spot and he remained in the yard. Ha… success! He then learned that with the proper velocity and downhill ratio, he could easily scale the rickety old fence. We learned this after another expensive off-leash ticket. It was time to bring out the big guns.

The electric fence consultant taught us how to properly train Woodrow on the fence shock system. After a major hole in our bank account, and a considerable amount of time spent training him, Woodrow was actually a quick study. He learned exactly how to run through the invisible fence line at harrowing speeds, willingly trading the strongest zap for his freedom. We’d hear a loud YIP and knew he had escaped… again. We could host a Ticker Tape Parade for the amount of tickets we’ve accumulated, each becoming more and more expensive for our repeat offender.

At this point, one begins to wonder… should we just let him run free? Does he need to be on a farm? What a choice to have to make. He was a part of our family. You don’t just give away a child if they keep acting up (I wish!). It was my mother-in-law who had always said, “A dog is for life,” and with her words ringing in our ears, we couldn’t give up on Woodrow.

For the next attempt at domesticating Woody, we tried electric “horse” tape around the top of the fenced area. It took a weekend to install and about $500 in supplies. We now had both the top AND bottom of the fenced enclosure secured. We let him in the back and watched as he sniffed the newness of his grounds. He’d look up at us with remorse filled eyes—we won! The call from Animal Control, who knew me on a first-name basis, startled me awake: “Hey Sandy, we found Woodrow again and are required to bring him to the shelter this time. There will be a $500 fee to get him out.”

The move to our new home threw Woody off his game. We didn’t have a fence at all—just a large lot of land with room to roam. Oh, how he basked in the compliments of his good behavior as he lounged about our property. Each belly rub fed his ego and in no time, he was back to his old tricks. So, we had a $7,000 5-foot fence installed with a thin shock wire on top. When all was finished, we waited, a bit sadistically, for Woodrow to attempt his shenanigans. As expected, he did. It took one long ZAAAAAAP and he never tried it again.

Woodrow has been a challenge from the beginning. He doesn’t realize how much he’s worth and everything he’s put us through. He’s just pure Woodrow—wild at heart. He also doesn’t realize that he has taught me and my family to understand that there is a reward for patience and compassion and to not give up on someone or something because they aren’t perfect. He taught us to look past the shenanigans, applaud his tenacity, and laugh at the stories that we’ll have forever.