If You Don’t Know Chris Vinci, You Should!

If you meet Chris Vinci, you won’t have trouble hearing him. His booming baritone is among the first things you’ll notice as he bounds over with a cheerful greeting. He’s tall, he’s loud, and his optimism runneth over. He’s definitely one of the more pleasant people you’d ever want to spend the day with.

Chris has been a realtor in Evergreen for 17 years and he’s seen a lot, but he says nothing quite compares to last summer’s market. “The hardest market I’ve ever been in,” he says. “It’s exciting, but also frenzied, and really challenging. You don’t just throw a listing on the MLS, it sells in a weekend and you’re done. There’s so much more to it.”

Chris moved here in 2003 and credits his success and longevity to his outgoing personality and his decision to create a boutique brokerage. “The first time I visited Evergreen, I walked downtown and talked to everyone I saw. Coming from the San Francisco Bay Area, I was excited to experience such a small, friendly community. I thought, I can get to know everybody in this town.” He started his own brokerage, da Vinci Realty, in 2007, and has been working from his office in downtown Evergreen ever since. 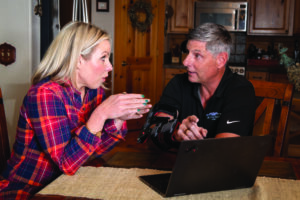 When he’s not helping people solve problems around buying or selling homes, you might encounter Chris on a sports court. For one, he loves tennis. His name is on a banner inside the courts at Meadow Creek Tennis Center. “In 2019, I won the club championship in men’s 4.0 singles. I was the underdog, going up against the defending champion.” He also loves an after-party. “I’m the Unofficial Griller-in-Chief. We love hosting teams from other facilities, then barbecuing afterward and getting to know people.”

For years, he captained a team in the Evergreen Rec District adult competitive softball league. “I am a competitive leader,” he says. “On the field, I’m loud, I’m happy, and I hate to lose.” His first team was made up of fathers from his daughter’s playgroup. “Our team was called the Dugout Daddies. We were kind of like the Bad News Bears for a couple of years, then we became competitive, but we never won a championship. My favorite memories are hanging out after the games, eating, drinking, and throwing cornhole.”

At the end of the first season, his teammates voted him the player with the “Most Grit.” Why? “I think because I got a lot of hits, I played hurt, I got dirty, I dove for balls, and I was the oldest on the team. I was scrappy!”

This year, his sports season was cut short by surgery on his elbow. The arm brace to help with post-surgery healing “kind of makes me look like the bionic man,” he says, “But anything that makes me look like a superhero is okay with me.”

For many years, da Vinci Realty sponsored the winter pond hockey tournament on Evergreen Lake. “The way I explain it to people is, I sponsor the tournament, I bring a bunch of ragtag guys, I go out on the ice for about 30 seconds, and I do the face-off. After that, I try to protect my old body and don’t bring the team down. I think I scored three goals in about eight years!”

Another place you might cross paths with Chris is at Evergreen Dance Center where he’s often dropping off or picking up his teenage daughter from dance practice at the Wulf Rec Center. You’ll know he’s in the audience at a recital if you hear that signature deep-tone chuckle of pride coming from the back when his daughter is onstage.

Chris also enjoys supporting other local businesses. “It’s fun to go into restaurants and get to know the owners. I’ve spent hours bowling at The Wild Game. When you go, check out the Wall of Champions. I’m on there three times!”

Other favorite Evergreen traditions? “The Big Chili Cook-off every September—I love running into people I know, and meeting people I don’t know. Live music is fun, and the chili is fantastic. I love that it supports our volunteer fire departments. We want them to have the best equipment—they keep our homes from burning when mountains are on fire. Anything we can do to support our firefighters is huge.”

The real estate industry has changed in 17 years, and one way Chris is keeping up with the times is with his new YouTube channel. “There are always new ways of reaching out to people with useful information about life in the mountains. I’ve got dozens of videos about the Colorado Foothills on my channel—plus a lot of blooper reels which, let’s face it, are what people watch most of all!” To watch, just go to YouTube.com and search for Chris Vinci of da Vinci Realty in Evergreen, CO.

Da Vinci Realty survived the market crash in 2008, the flood in 2013 and the 2020 pandemic. “So I must be doing something right,” says Chris. “I’m a problem solver, and I genuinely care about people. I want people to know that there are experienced realtors out here who can help them get their deals across the finish line.” 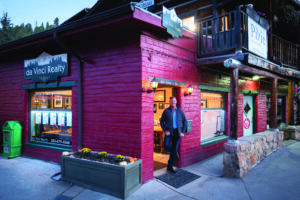 Want to meet Chris Vinci? Just walk by his downtown office at 4600 Plettner Lane #1A, Evergreen. If he’s inside, you’ll hear him! Call or text at 303.995.3467, or email Chris@TRUSTdaVinciRealty.com. A quick, easy way to see Chris’s blooper reels is to visit his website at TRUSTdaVinciRealty.com.