“I’ve found that I climb to feel small; to disappear among the vastness of all that has stood for millions of years.”

The Three Apostles stand in silence. The middle one is known as Ice Mountain. It is sometimes considered the most dangerous climb in the entire Sawatch range. In fact, renowned Colorado climber Gerry Roach considers the foreboding flanks of Ice Mountain to be one of the most dangerous peaks amongst the Centennial thirteeners (13,800+ foot peaks littered across our state). Perhaps that’s an overstatement. But Ice presents a challenging climb by any comparison, with some route-finding thrown in.

At 13,951 feet, Ice Mountain is generally out of character with the gentle contours of the massive 14er peaks surrounding it. Overall, the Sawatch Range (a phonetic spelling of the term Saguache deriving from the Ute language) features 15 of Colorado’s popular 14ers stretching from I-70 south through Salida. Many readers have climbed those peaks, including our state’s pinnacle, Mount Elbert.

Ice Mountain is on the Continental Divide, approximately 5 miles south of the historic ghost town of Winfield. It is tucked back behind Huron Peak and requires climbers to dig deep, step with care, and improvise a bit. The Three Apostles are a majestic sight to behold, but their steep flanks and loose rock can invite injury and maybe even threaten the loss of a toenail or two.

From the north, the journey to Ice Mountain runs through Leadville, south on U.S. 24 to Chaffee County Road 390. From there, it’s a long 12 miles along a potholed dirt road to reach the mining town of Winfield. The road will loosen a few car bolts for sure. At this juncture, it’s a 2.1-mile drive along a narrow 4WD road to the upper trailhead. If you’ve ever hiked Huron Peak, you’ve been to the trailhead for Ice Mountain.

It never seems that the pack gets lighter. For an overnight trip, the weight burdens the shoulders. But the surrounding slopes and the turning aspen trees serve as a distraction for the 3+ mile trek back to the basin. It turned out that my colleague and I were the only two campers within miles. The stillness and solitude were palpable. For my friend and climbing partner, the overnight trip presents the opportunity to press the reset button and reach a renewal of sorts. I can’t say I disagree.

We had arrived to our chosen camp after the September sun had disappeared over the towering ridge, but it still provided a warm light throughout the late afternoon sky. The view of the Apostles easily inspires wonder despite knowing a tedious task awaited in the distance. It’s not often that such rotten terrain can be so beautiful from a distance.

Ice Mountain dominates the center with its fellow Apostles to the north (13,860 feet) and west (13,568 feet) offering a stoic companionship. The view is spectacular in the soft waning light. And the silence leaves the feeling that the world has lost its inhabitants.

After eating a freeze-dried dinner that sprung to life in the heat of a Jet Boil stove, we stood in camp and watched the light grow dimmer. It felt as if the darkness washed over us and enveloped the entire camp. Slowly the sky darkened and the stars appeared in the heavens. Despite the masses moving to Colorado each year, it remains easy to disconnect from humanity and feel small again amongst our mountain cathedrals.

The night was chilly for a mid-September outing, but then again, our camp was sitting about 11,300 where the cold settled in all around us. Comfort was only found in a beanie hat and the coziness of a down sleeping bag. In general, I’ve found that sleeping is more fitful than would be expected for such idyllic surroundings. But having the chance to reconnect with the natural world remains a gift, even for a night, because it comes without cellphone service… where bedtime is imposed by Mother Nature extinguishing the lights.

The morning came more quickly than expected and the skies were customarily clear for the time of year. Packing in for a camp afforded a few luxuries—such as the ability to get a later start and make a warm cup of coffee in the early dimness.

Compared with 14ers, the route-finding requirements for many of the 13ers, including the Centennials, can be a challenge. Ice Mountain is no exception. A little bushwhacking was needed and pausing on the trail to confer was helpful.

Bursting through the willows and climbing up a slope filled with ledges led to the precipice of the treeless landscape that pointed the way to the Ice saddle. But the passage to get there would not be an easy or delightful one. The thinning air was compounded by terrain that included car-sized chunks interspersed with talus and ball-bearing scree. It was slow going. But spying the headwalls always reminds me of the eons of time that have passed since their formation and how privileged I am to have earned a visit to such a magnificent arena.

We climbed in parallel paths to minimize the threat of rockfall from each other, noting that several boulders appeared to have slid down without provocation. Long after dawn has come and gone, the sun has yet to appear keeping a chill in the air and a winter hat on my head. The climb goes toward the rising sun so its rays don’t hit your face until you reach the saddle.

Once at the saddle, the trail took a sharp left turn and up the ridge to North Apostle, the first goal of the day. It’s an easy trek to the top. But its ease belies the difficult passage ahead. At least the views from North Apostle provide a preview of Ice’s northeast ridge.

Ice is a climb that has a reputation amongst those who have attempted it. And that reputation weighs on your mind. Fortunately, mountain climbing is a challenge where you can make up for so much through your mind alone. This is particularly helpful when standing on the saddle and staring at the remaining task ahead. Of course, it is also nice to have such a trustworthy climbing partner and a quality helmet.

The northeast ridge is steep and the rock is rotten in many areas. There were points where the path reminded me of Capitol’s K2 bypass. The first obstacle appears to be a chimney in the distance but the route skirts its channel and sends climbers cresting to the right. The traverse continues below the ridge proper and crosses a few ledges and a gully.

In the distance there appears to be a grouping of green jagged rocks. Seeing green rock always reminds me of the well-known section on Pyramid—and I hope these rocks are just as solid. It turns out they are. The jagged rocks represent the final gateway to the crux of the route.

The final gully is the steepest on this climb. It is perhaps 25 feet long and is exposed to the depths below. Definitely a no-fall zone, but the rock gives the hands confidence in making the moves upward. It is also a gully where the climbing is best done one person at a time, and hopefully when the north-facing route is snow-free.

Popping up on the ridgeline, the difficulties are over. The remaining path to the summit is narrow but easily navigated with nimble boots. On this day, the sight is particularly spectacular—because no one is there. For those who have climbed any peak in Colorado, it is a rarity to reach a summit when the sun is shining and the solitude is abundant. On this day, on this narrow and jagged summit ridge, the views are even more satisfying. Maybe because the climbing was so much fun—or maybe it’s just a relief to have arrived.

Each summit is special for me. I remember them all. I remember the idiosyncrasies of each climb and any unusual experiences along the way. But what remains a constant is the deep-seated wonder and appreciation for all that the eye can see.

Some climb to carry cardboard cut-outs and post Facebook entries to ensure the world sees them and the named peak. Some climb to conquer the mountain and claim victory—to feel bigger in the moment.

I’ve found that I climb to feel small; to disappear among the vastness of all that has stood for millions of years. It is this smallness that makes me feel so large inside. It is a potent feeling that I know only lasts a short time. But my thoughts keep it with me through those redundant days that life sometimes requires.

Ice Mountain is a climb that bites you on the way up and back down. It punishes tired legs with slopes that seem to disintegrate beneath your feet and terrain that still requires precision when inviting boulders unexpectedly shift. But the route down begins with the crux and the decision whether to face in or face out on the descent. Though steep, the rock is solid enough to lower the body facing out and negotiate the hardest obstacle. But the difficulty doesn’t cease for another mile or two.

Back in camp, the departure is always hard. Breaking down the tent and removing all traces takes some extra effort when exhausted. And hoisting a heavy pack for the march to the trailhead is never a thrilling mission. But its pains always pale in comparison to the joys of standing on the summit.

Why do we seek such suffering? Perhaps it makes us feel alive. Perhaps it’s the willing bounty paid to earn the elation of a summit view. Perhaps it persists as a personal challenge that never seems to subside. It’s all of these things. Colorado is a special place to us all.

Undoubtedly, Ice Mountain maintains its reputation as a cold and foreboding peak. But its place among the Three Apostles arching across the Continental Divide may still convince you to come calling. It’s a memorable journey. 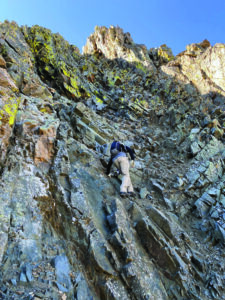