A Warrior With a Kind and Humble Heart

A Warrior With a Kind and Humble Heart

“Life is breathtaking. Try to find something good in every day.“ 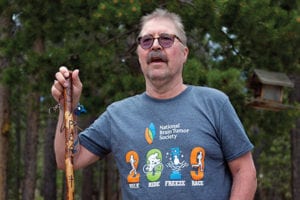 Don Sypert has never shied away from hard work. He spent 37 years working in construction as a commercial and residential carpenter. Don was born and raised in Ohio, but as a young man, a construction job brought him to Colorado by way of Arizona. He relished taking on difficult challenges and succeeding, believing that the best rewards in life are those you earn through effort.

“I was a hardworking construction man,” explains Don. “That’s the way I was brought up. It’s in my spirit. I came from a hardworking middle class family. I had great role models. My mom and dad were auto workers and my grandparents and aunts and uncles were factory workers and steel workers.”

In 2011, Don started experiencing numbness in his arm. He chalked it up to a pinched nerve. His doctor agreed that was a likely possibility but scheduled him for a full physical just in case.

“Believing he was fine, Don did the ‘man thing’ and cancelled his appointment,” says his wife, Linda Sypert. “That night, we had a talk as a family—Don, his daughter and I, and we all agreed that if he had issues again, it wasn’t a choice, he was going into the emergency room.”

A few weeks later during a shopping trip, Don lost all feeling in his arm and his face went numb. He was rushed to the emergency room. The doctors thought he was having a stroke, but Don’s EKG came back normal, so they performed a CAT scan. The imaging revealed a large mass near the back of Don’s head. A brain surgeon confirmed Don had a glioblastoma, one of the most complex, deadly and treatment-resistant cancers. The doctor told Don that if he did nothing, he would be dead in six weeks. “I figured, well, this is something. I’m not going to ignore it this time. Let’s get it dealt with and then get me rehabbed and get back to work,” says Don. “That was my mindset. I wasn’t afraid because people have things all the time. Some people have diabetes, others have high blood pressure and some people have immune deficiencies. This is just what I have.”

Don underwent his first brain surgery on May 17, 2011. It marked the beginning of what’s become a 10-year battle with a malignant brain tumor. He’s undergone three surgeries, chemotherapy, radiation and has spent two and a half years participating in a clinical trial for an experimental drug.

“I’m nothing special. People call me superhuman. I’m just a man living with cancer. I’m taking it one day at a time,” Don explains. The stats, the science and anyone who has ever met Don would have to disagree. The average survival rate for glioblastoma is only 12–18 months. Less than 7 percent of patients diagnosed with a glioblastoma live five years.

“Don has touched my heart in so many ways. He was one of my very first patients at Mount Evans about six and a half years ago,” says Mount Evans Therapy Manager Isabelle Comina. “He is one of the most determined and motivating patients I have ever worked with in my 28 years being a PT. He is always willing to try something new and pushes himself to the limits. Don’s will to push through and his determination is an inspiration for all of us. Nothing stops him from enjoying and appreciating every minute of every day.”

Isabelle is one of 152 contacts Don keeps in his phone. This means she’s one of 152 lucky people who receive random messages of kindness, joy and affirmation.

In the first months after Don’s diagnosis, he put a heroic effort into going back to his work in construction. He managed to stay on the job during his first round of radiation, but chemotherapy proved to be too much. He realized his new full-time job needed to be taking care of his health; however, for a man who always worried about everyone else before he thought about himself, he needed more from his work.

“Don believes his job now is to be a source of good in the world for others,” explains Mount Evans Palliative Care Social Worker Janet Reichart. “This motivates him to constantly strive to do better, to be better, and to tap into his deep well of resilience when he is feeling down. Don’s positive attitude shines through even in his hard times. He is the embodiment of gratitude and grace in action.”

Part of being a source for good for Don involves raising money and awareness for the National Brain Tumor Society. He completed his first walk a month after his first surgery and he’s participated every year since. This year was no exception. Even a pandemic couldn’t stop Don from being a source of inspiration. “I feel that it empowers people like me to fundraise for research, treatments and a cure. It also lets my family and my friends know that they could get through anything,” says Don. “I feel it’s my duty to pass on my courage and strength to my family and friends.”

Mount Evans Physical Therapist Reed Brandenburg worked with Don for six months to build his strength and ensure he could walk safely outside without a risk of falling. “Don inspires people around him to take what life throws at you head on,” says Reed. “Rather than feeling like a victim and complaining, he accepts the challenge and fights back with a positive attitude, accepting his condition but not letting it define him.”

When Don set out from his house in early June, he thought he might only have three other people with him. Instead, all those random acts of kindness he’d selflessly spread as far and wide as he could, came back to him. Don was joined by 50 members of his team. A dozen joined him at his home near Blackhawk from as far away as Ohio, while 40 others walked virtually in California, Montana, Sterling and Estes Park.

It’s not clear how many years are left in Don’s future. He recently underwent an MRI that showed his tumor was stable for now, but of this he’s certain: there is so much more he wants to do. “Life is breathtaking. Try to find something good in every day. Stand back, breathe in the air and enjoy every breath you take and every move you make because you never know when it’s going to be over. You don’t want to have any regrets. You just want to take in life to the fullest, every single day, every minute of every day, every day of every month, every day of every week, every week of every month, every month of every year.”

If Don’s story touched your heart, we’d like to ask a favor of you. We are going to post a link to his story on the Mount Evans Facebook page. We’d love for you to share a message of kindness to him on the post and let him know what a difference he’s making in this world.